Home / Retail Omni-Channel / 600 million years later – what can an octopus teach us about technology?

600 million years later – what can an octopus teach us about technology?

Summary:
Reaching out a tentacle on World Octopus Day to find parallels with technology innovations. 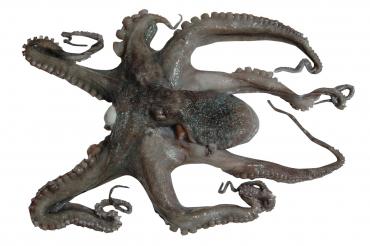 October 8 is World Octopus Day. If you look at the biological source code, cephalopods, the family of octopus and squid, forked from the version that includes humans some 600 million years ago. They are our most distant relatives on the planet having evolved to be more different from humans than any other species on earth.Â  But, in the spirit of celebrating diversity, we should note that the octopus can teach us a lot about modern technology systems.

One striking difference between the two species is that the brain functions of the octopus are highly distributed, whereas in humans, a powerful central brain controls most activity.

Of an octopusâ€™s 500 million neurons, more than 350 million are divvied up among its eight arms.Â  New research supports previous findings that octopus suckers can initiate action in response to information about their environment, coordinating with neighboring suckers along the arm. The arms then process sensory and motor information, and muster collective action in the peripheral nervous system, without waiting for commands from the brain.

The result is a bottom-up (arm-up?) decision mechanism, in contrast to the top- or brain-down process typical of vertebrates, like humans, according to Dominic Sivitilli, a graduate student in behavioral neuroscience and astrobiology at the University of Washington in Seattle.

The advantage of distributed smarts

Among the benefits of this distributed model are fast response times, and the ability of multiple parts of the brain to multitask, or work on separate jobs simultaneously. This is true even though the bulk of octopus brain activity still reside in the central brain. The brain acts as a coordinator of the eight other functions and a central memory unit.

This sounds an awful lot like an animal version of edge computing, an emerging model in the tech industry where a central, typically massive, cloud-based â€œbrainâ€� connects to multiple external units that have more limited processing capability but whose value comes from their proximity to the task at hand.Â

Examples of edge computing include driverless cars and remote patient monitoring. These applications require some immediate decision making by the local device. Then, those edge devices funnel data back to cloud/central brain, where it is collected and analyzed. Resulting lessons are then returned to edge devices.

With 5G adoption, there will be an explosion of new applications across industries. In manufacturing, for example, the combination of small sensors and ubiquitous wireless connectivity will let companies track very specific location information for material and parts across the supply chain to improve inventory, production, and distribution processes.

Similarly, the network will provide far more detailed information about the health of components and subsystems in cars and other heavy equipment. That, in turn, will enable very specific remote diagnostics capabilities.

The advent of new 5G data networks will lead to an explosion of even more edge devices that have their own intelligence, but also connect to the cloud brain. Much like cephalopods submerged in a busy ecosystem rich with new data points, our networks will be deluged with even more data worthy of collection â€“ in addition to the billions of connected devices currently in the biome.

But there is one area where the octopus has yet to adapt in a way that is crucial to technology networks.Â If an octopusâ€™s tentacle is cut off, it grows back remarkably quickly.Â  But if it should become infected, that tentacleâ€™s disease can spread to the whole animal.Â

This is where we need to leave the ocean and look to man-made solutions for monitoring and securing edge devices to ensure rapid response to attacks–the tech equivalent of biological infections. It is not enough to field a secure cloud/brainâ€”the edge devices themselves and their connections to each other and to the cloud must be fortified and scrutinized around the clock so threats can be mitigated or stopped before they broaden and escalate.

In short, as more edge devices attach to the mother ship, the defense perimeter of the entire ecosystem gets bigger, more complicated, and harder to defend than a fortified cloud data centerÂ  on its own.

On World Octopus Day there is much we should celebrate about these animals that are so unlike us and yet have so much to teach us. But, unlike long-evolving cephalopods, humans cannot afford to wait millions of yearsâ€”or even a few monthsâ€”to fortify far-flung networksâ€”incorporating billions of edge devicesâ€”against threats. That work must be done now. NRF 2020 – customers are generating a gold mine of operational data, and Oracle wants to do something about it