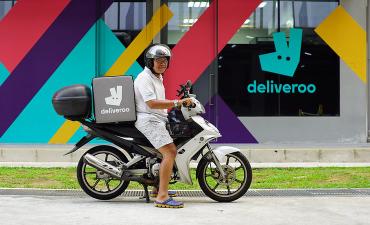 Fast-moving distributed teamwork is one of the hallmarks of a successful digital business. Deliveroo, the UK-based restaurant delivery service founded in 2013 and now operating in 13 countries from Ireland to Australia, is no exception. It has built an enterprise collaborative canvas based on Slack and G Suite to keep collaboration fast, accurate and efficient. CIO Will Sprunt says most of his communication at work is through digital channels:

It doesn’t matter if the person is sitting nine feet away from me, or they’re in the building next door, or they’re on the other side of the world. I’m actually interacting with them almost always the same way.

Companies like Deliveroo are using digital connectivity not only to pioneer new business models in how they interact with customers, but also to organize their internal operations in new ways, such as how they integrate outsourced services. The most proprietary elements of Deliveroo’s operations use in-house resources, such as the development of its core technology and contract negotiation of key relationships. But other more standardized, predictable activities, for example in customer support, are outsourced. Collaboration with that outsourced team, based in the Philippines, is just as immediate as communication with internal colleagues, says Sprunt:

The fact that you have a third-party provider who is, let’s call it location-agnostic to all of our other offices â€” it doesn’t put the same sort of impediments, which it would in the past, to establishing a really good relationship. [You can] establish some really good workflows, a really good partnership, and make people feel like a true team.

Slack for now, Google for later

Slack is the tool of choice for in-the-moment communications, while for more reflective collaboration, people prefer to open a Google document, Sprunt explains.

Anything which revolves around instantaneous collaboration, Slack is absolutely the tool …

If we need collaboration on a long-form document or a complex idea, you don’t necessarily want to be doing that in a thread of messages. You can, but it starts getting muddy and complex, relatively quickly. Whereas actually keeping structure on something with a document is really powerful. Google Docs is something we use a lot internally in Deliveroo.

The two tools integrate well together, along with the important ability to tie in authentication services to provide access control and audit trails. One example of how they interconnect is the process Deliveroo has set up for incident management. While messaging in Slack is the best way to deal with the crisis in the heat of the moment, evaluating what happened and lessons learned requires a document-centric approach, says Sprunt.

Once you’re past the linear problem-solving stage and you’re actually at the stage of collaboration on a deeper analysis, you want that second piece.

Deliveroo has created an automated process which is kicked off by typing “/incident” in Slack, followed by an incident name. That invokes a bot which automatically creates both a Slack channel and a Google document from a ready-made template. A pinned message in the Slack channel links to the Google Doc, which serves as the post mortem document. Sprunt believes the ability to create a joined-up process like this demonstrates the care both vendors have taken to make sure their tools work well together.

That way, you have both pieces of communication existing in parallel and both of those different use cases being actually connected together. But it’s only really available because I think both Google and Slack have thought very carefully about the connectedness of that tooling and the permissioning, with the expectation that if you’re a tech-savvy company, you’re going to want to hack something together out of their products.

Another bot provides explanations of frequently used terms within Deliveroo that might not be familiar to new team members. For example, AOD (average order delivery time) is an important KPI for the company.

You’ve just joined, you’re brand new, you might not know that term, but you might know, ‘Okay, I know to type in /what is.’ And it immediately brings up a definition for you, right along with a definition owner, which is really important. So if you have further questions, you can ask them. Also, if you want to change, edit or submit an alternate definition, all those commands are available in the bot itself, inside the Slack panel.

The backend for it is a Google Sheet. And again, it’s that connectedness which allows it to be possible, the openness of both both of the platforms’ APIs.

Deliveroo operates in a highly competitive market, vying with local rival Just Eat and global player Uber Eats. It doesn’t currently have to worry about Amazon, which withdrew its discontinued restaurant delivery service from the UK market at the end of 2018 and led a $575 million funding round in Deliveroo last May. But that may change if an ongoing investigation by the UK competition regulator ends up ruling against the investment.

Being able to automate and standardize frequently used processes helps Deliveroo stay lean as it grows. Slack provides a ‘safe space’ where people can add automations for themselves â€” other bots include one for onboarding, and another that schedules randomized coffee chats with other people in the organization to help people get to know their work colleagues. People don’t need to ask IT to build these, says Sprunt.

These aren’t things which I as a CIO has said we need to build and develop and I have mandated that this will happen. It’s very much a community thing.

Sprunt’s team doesn’t have to worry about new automations introducing security or access issues because these controls are already built into Slack, he adds.

The apps inside Slack are sufficiently lightweight that I almost don’t class them as discrete pieces of software, precisely because they’re actually not causing the two things which give me headaches about it.

As with many fast-growing digital businesses, there has been an element of application sprawl in the past at Deliveroo. Sprunt’s team have put processes in place to ensure potential new apps are vetted for security and compared against an approved list of existing apps. This has slowed and even reversed the proliferation of applications. Slack also helps, he believes, because it makes it easier to share processes across the organization and therefore reduces the scope for proliferation.

The most important thing in all of this is the theme of collaboration and connection. Essentially, teams do things differently and purchase different software differently when they’re not connected properly.

One of my takes on digital connection is that it enables frictionless enterprise by removing the barriers of time and place that used to define the industrial enterprise. Whereas the Ford Motor Company built vehicles at a huge integrated factory in Detroit with its own power plant and steel mill, a digital business like Deliveroo doesn’t even own any restaurants. Digital connection has reset the transaction costs of business to the extent that it’s often far cheaper and more efficient to source capabilities from outside the enterprise than build your own.

But while Deliveroo embodies this principle in its use of outsourced customer service, it also demonstrates that frictionless enterprise sometimes opens up new opportunities for vertical integration. Deliveroo may not own any restaurants, but it does own kitchens. One of the uniques of its business model is Deliveroo Editions â€” so-called ‘dark kitchens’ with no restaurant frontage that Deliveroo makes available to restaurant partners to extend their takeaway service into new areas. Sprunt tells me:

The sites and restaurant partners for these kitchens are determined by data analysis of likely demand. Deliveroo then strips out the friction of opening a new restaurant to serve that demand by offering its partners a ready-made kitchen. This is a useful reminder that going digital isn’t just about adding a digital layer to existing activities â€” it also means finding new, networked ways of doing things that weren’t possible before. Automation in the hospitality sector – the time to act is now