Summary:
Target’s Drive Up service is one of a number of services built around the consumer push for same-day fulfillment. 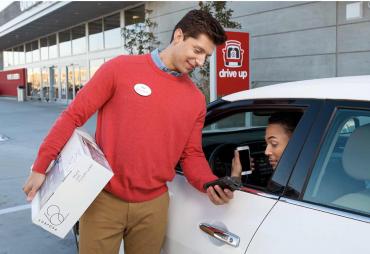 Labor Day weekend in the US is (in theory) one of the busiest times of the year for retailers and marked by sales and bargain offers to be snapped up. In recent years of course the Labor Day retail action has moved online with shoppers able to participate without breaking into their holiday time to schlep down to the mall.

That said, there are still those who make a trip to the stores part of their routine, holiday or no holiday. With those people in mind, Target – one of the bell-weathers when it comes to reporting on holiday retail traffic – went into Labor Day weekend with an interesting announcement to the effect that its curbside Drive Up service has now been rolled out to every state in the US.

Drive Up was first piloted back in 2017 in Minneapolis and St Paul, before being formally announced last year. The idea behind the service is simple, but compelling. Rather than placing an order online and then waiting in for delivery, shoppers make their selections via the Target mobile app, then drive down to the nearest store where theyâ€™ll find an allocated parking space for pick-up and a Target associate to carry the goods to your car. The original window between ordering and pick-up was 2 hours, but this has been reduced to an hour in most cases.

While the service isnâ€™t yet available at every individual store, the retailer has built out a footprint of 1750 stores across every US state in less than two years. The company says it has fulfilled 5 million orders via the service in the first half of this year, double the figure for the whole of 2018.

In a further sign of the success of the initiative, Drive Up is rated as the most popular Target service, better rated than in-store pick-up or Shipt, the firmâ€™s same day delivery service for which customers pay a subscription fee.

All three options cater to the increasingly impatient online buyer who doesnâ€™t want to wait for his or her purchases to arrive in the mail a few days after pressing â€˜payâ€™.Â  Theyâ€™re also proving lucrative to Targetâ€™s bottom line. Combined sales for in-store pickup, Drive Up and Shipt have more than doubled over the past 12 months and now account for around 75% Target’s digital revenues.

Itâ€™s a point that was picked up recently by Chief Operating Officer John Mulligan when he highlighted the importance of digital fulfilment:

The mix is moving dramatically towards our same-day services, in-store pickup, Drive Up and Shiptâ€¦our same-day options are growing much faster than our digital sales.

For many guests, they are becoming the go-to choice for their digital shopping because they offer unique advantages. They are immediate. They allow guests to shop and receive their order on the same day. They are convenient. Guests can choose where they receive their order, either at the front of the store, in the parking lot or at home. They are fast. Our standard is for drive-up guest to receive their order in less than two minutes and our average is comfortably better than the standard.

And finally, these services provide certainty. Guest don’t have to wonder when a package will arrive at their house and what will happen to the package if they are not at home. And of course it eliminates the need to deal with opening and recycling a stack of cardboard boxes every week.

For that â€˜immediacyâ€™ to work, there needs to be a smooth back room operation in place. Thereâ€™s no point in having customers drive down to the store and then spend an hour sitting in their cars waiting for their goods to be found in the warehouse.

This is an area that Mulligan and his team have focused on in recent years:

We have made a concerted effort to increase the efficiency of all of our store fulfillment options including both our same-day and ship from store capabilities. As a result, since the beginning of 2018, order picking efficiency for pick-up and Drive Up has increased more than 30%. Similarly, end-to-end labor efficiency for our ship-from- store capability has also improved by more than 30% over that same period. These are massive improvements which we realized through the natural scale efficiencies we see on higher volume, which are compounded by incorporating improved processes and technology.Â These tactics include creating larger batches for picking orders based on the goal to balance efficiency, speed to guest and the guest experience, optimizing the path for the picking to minimize steps to the backroom and sales floor.

Certain parts of the year, such as Labor Day weekend or the infamous Black Friday/Cyber Monday period, put more pressure on the back end, but this has been factored in according to Mulligan:

During seasonal peaks, batches are further segmented into subsections of the store like back-to-school orders this time of the year. Applying new algorithms to prioritize the sequence of order picking based on a range of criteria rather than simply applying a first-in, first-out system, implementing new technology to eliminate ambiguity for our store team members about which work to perform first, when work is due and the optimal box size for packing orders.

While this has been successful to date – and provided Target with some ballast against Amazon and its own same day delivery service – the question is inevitably one of scale. As more and more of Targetâ€™s business involves digital ordering and while Mulligan insists that â€œwe love the shift to the same-day experienceâ€�, stores will need ongoing investment to perform their new function as fulfillment hubs.

This isnâ€™t only a challenge for Target. The likes of Walmart have similar issues. On this topic, Mulligan is confident:

Our experience shows that our stores have a very long runway of capacity. Think of it this way. Last year, store-fulfilled sales accounted for an average productivity of just over $300 per square foot and when you do the math, every additional $1 billion of store-fulfilled sales would raise that productivity by about $4 a foot. In other words, if we double last year’s $5 billion in digital sales and fulfilled all of that extra volume in our stores, we would see our average store sales productivity rise by just over $20 a foot.

So the question is, can our stores accommodate that volume in their existing space? The answer is clearly, yes. And the easiest way to see that is by looking at the range of productivity of our stores across the chain. Specifically, our top quartile stores, a group consisting more than 450 locations delivered average per foot productivity of more than $430 last year. That’s more than $100 higher than the average for the chain. So based on our success in operating that large set of stores, we believe we have a lot of room to grow our overall sales productivity through digital fulfillment.

The need for speed is increasingly apparent in digital retail and weâ€™ve moved on from the kind of complacency around this that we saw in some quarters a few years back.

I found myself this weekend becoming irritated when a purchase I made via Amazon turned out not to offer next day delivery via my Prime membership. My immediate reaction was to try to find an alternative provider. In this case unfortunately there wasnâ€™t one to hand, so Iâ€™m forced to wait until the end of this week for delivery. As the saying goes, first world problems or what?

But the point remains valid – being able to reduce order fulfillment times is now a critical competitive differentiator in omni-channel retail. Target has enjoyed considerable success to date, but this is a battleground that is still very much in play.

The Labor Day retail numbers will start to come in from later today onwards, but there are bigger battles to come. Reluctant though I am even to acknowledge the onset of Christmas, the reality is that the first Black Friday press release hit my desk last week! Exposure of inadequate inventory management and inefficient fulfilment has been a characteristic of recent years. This year thatâ€™s never been more in focus.