Summary:
Margrethe Vestager is about to become a lot more powerful and has the US tech sector in her sights. 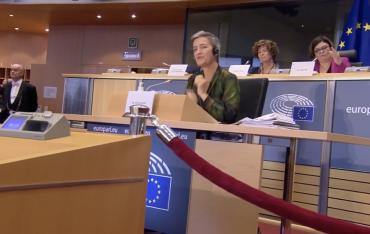 Donald Trump has described Margrethe Vestager as â€œperhaps worse than any person Iâ€™ve ever metâ€�, which given the number of contenders for the title is quite the back-handed compliment. That being the case, thereâ€™s some bad news for the President – Vestager looks set to pick up some additional powers that are likely to make her not only a thorn in his side, but an even bigger force to be reckoned with by the US tech sector.

Who is Vestager? For the past fiveÂ years the Danish politician has been Competition Commissioner at the European Commission (EC), in which role sheâ€™s taken on the likes of Google, Microsoft and Apple and displayed no hesitation about doling out hefty fines to penalise big tech. She now seems certain to hang onto her competition responsibilities, but also take up a new role as Executive Vice President for a Europe Fit for the Digital Age.

Assuming her appointment is ratified following a confirmation hearing yesterday – which seems all but certain – then from 1 November, Vestager becomes arguably the most important digital economy legislator in the European Union (EU). ThatÂ appointment comes on the eve of a busy agenda for 2020 which includes the Digital Services Act, a radical reform of existing e-commerce regulations; a commitment to deliver an AI strategy within her first 100 days in office;Â  and reviving the idea of a pan-European policy on taxing digital services providers.

At her confirmation hearing, she provided some insight into how she plans to tackle that â€˜to doâ€™ list, starting with a mile-high pitch for her personal priorities and philosophy:

Her work as competition commissioner has shaped her views as she explained:

Competition rules donâ€™t make it a crime to be big. But dominant companies have a special responsibility not to use their power to harm consumers. Companies are also free to merge. Just as long as they still remain subject to challenge. Because companies cannot deny consumers the benefits of effective competition. Affordable prices. A choice of products. And innovation for better products serving their needs.

These are challenging times for competition enforcement. Markets are changing fast â€“ and there are even bigger changes ahead. But human nature â€“ basic motives like greed and fear â€“ donâ€™t change. And so the principles that guide our competition rules are as relevant today as they were when the Treaty of Rome was signed, more than sixty years ago.

Europe needs to have a strong industrial strategy that incorporates openness, diversity, green awareness and is based on fair competition, she argued. And it needs to reach out beyond the EU Single Market and operate on a global level playing field, she added:

A good industrial strategy also has to make Europe fit for the Digital Age. Because there are only two types of business today: those that are already digital and those that soon will be. Digitisation has enormous potential to make our lives better. But to unlock that potential, we need the right rules, to give people confidence that the digital transformation serves citizens and respects our fundamental values.

She emphasised three values that need to inform the digital age â€“ trust, humanity, and fairness:

On trust, we need to engage with peopleâ€™s concerns about technology, and build trust. I will work on a Digital Services Act that includes upgrading our liability and safety rules for digital platforms, services and products. We may also need to regulate the way that companies collect and use and share data so it benefits the whole of our society.

On humanity, we need rules to make sure artificial intelligence is used ethically, to support human decisions and not undermine them. I will put forward proposals developing the European approach for Artificial Intelligence within the first hundred days of my term in office. 5

And on fairness, fair working conditions and fair taxation are amongst the foundations of a decent society. So, we need to make sure that platform workers enjoy fair conditions. We also need to make sure that digital companies pay their fair share of tax. We want these taxation rules to be based on a global agreement. But if thatâ€™s not possible by the end of 2020, then we are prepared to act.

Grilled by MEPs [Members of the European Parliament] on how these aspirations would be delivered in practice, Vestager spoke with calm conviction, conscious perhaps that there has been some concern aired about potential conflict between the dual roles of competition crusader and digital evangelist.

On taxing digital services providers – a topic that has infuriated Trump on the basis that itâ€™s assumed that this is aimed at taking money from US firms in the main – she noted that taxation was devised â€œway beforeâ€� computers,Â insisting:

Taxation has to be adapted to digitalisation. I hope that we can find a global agreement. If we cannot, yes, we do intend to act ourselves. This will be a matter of high priorityâ€¦.We need to make sure that digital companies pay their fair share of taxes. We want taxation rules to be based on global agreement, but if that is not possible by the end of 2020, we are prepared to act.

The OECD is currently working towards a set of international proposals around taxing digital providers, but to date, despite some (over)optimism earlier in the year, these have yet to be aired. Vestager said of this work:

I donâ€™t know what the outcome will be yet, but I hope they are working fastâ€¦From what I have seen in the work with taxation is that it is slow, but we have progress.I hope we will find a global agreement. If that doesnâ€™t happen, we will table and push for a European solution.

Of course, that has been tried before and ended in failure when the self-interest of various EU states kicked in, resulting in various nations, most notably France and including a post-Brexit Britain, announcing unilateral new tax regimes in lieu of a consensus policy. Despite Trump having dubbed her dismissively as â€œthe tax ladyâ€�, Vestager wasnâ€™t about to commit to squaring this particular circle as she observed drily:

It is always difficult to be optimistic when it comes to EU tax legislation.

As for her reputation as a competition enforcer, Vestager, whoâ€™s doled out record fines to the likes of Google for abuse of market dominance, signalled a change of tack:

Fines are not doing the trick and fines are not enough because fines are for illegal behavior in the past. Some of the things we will look into are even stronger remedies for competition to pick up in these marketsâ€¦.The things that we will be looking into is what kind of remedies come with the fine. For the future we will be much more aware as to what itâ€™s needed in order for competition to come back in a market that has been plagued with illegal behaviour by one or more companies.

The bad news for Silicon Valley is that she would still be open to calling for companies to be broken up if theyâ€™re judged to be in breach of a level playing field, although she emphasised this should be a last resort:

Breaking up companies, well, this is a tool that we have available, it can be done. The thing is, I have obligation to use the least intrusive tool in order to restore fair competition.Since it is quite a thing to break up a company, obviously I have an obligation to try what else can be a good tool to solve the situation that we are in.

Asked about whether there is a need to expand the concept of abuse of market dominance to include possession of data, Vestager said:

Data can work as an asset for innovation, but also as a barrier to entering. This is critical when it comes to AIâ€¦We will expand our insights into how collecting data works, how they can work as an asset. When you have [data] you can do even more. You can have amazing public data made available. You have already a lot of capabilities to make use of it, like precision farming for using few pesticides. Europe is good at it, for healthcare, environment, mobility, all things we need to create a fairer society. And yes, we can become world leaders.

And there was a warning shot fired in the direction of one familiar target:

One thing that I have learned from surveillance capitalism is that it is not you searching Google; it is Google searching you. We need to regulate how companies collect, store and use data so it helps society.

As for that commitment to deliver a feasibleÂ AI strategy within 100 days, Vestager admitted that the EU was â€œin a hurryâ€�, but made no apology for this:

Political slogans aside, whatever emerges out of an AI strategy, it needs to be built on trust and values, she added:

If we want to build trust, then you have to listen, but we have to listen fast.Â  What we need to do first is take stock, What do we have already? We already have a number of rules, safety rules for example. We have to make sure we are not re-doing the whole thing. We have to protect consumers and at the same time create some space for new products we donâ€™t know yet. AI is embedded in those products.

The only way to be successful is to build an AI we can trust, based on fundamental values. We have to build trust in the design, otherwise our society will reject it. It is not a desk exercise, not desk research. It is something for real. We need regulationâ€¦.These are crucial debates and we still have to do more for people to protect themselves.

Vestagerâ€™s emphasis on the need for a digital future built on trust chimes with the prevailing public mood in Silicon Valley, both from those who put their money where their messaging is and those who perhaps find it expedient to air the view. Her comments on moving beyond just hitting firms with big fines is a welcome development, although there will be nervousness among some big tech firms about quite what she sees as the alternative.

On the digital servicesÂ taxation front, Iâ€™m not about to hold my breath, but itâ€™s worth noting that the ECâ€™s stance is going to remain firmly committed to putting something in place, butÂ supporting individual EU states to go it alone in the interim. On that point alone, Vestager isnâ€™t going to be any nearer to getting in Donald Trumpâ€™s good books. But I donâ€™t imagine that bothers her in the slightest.