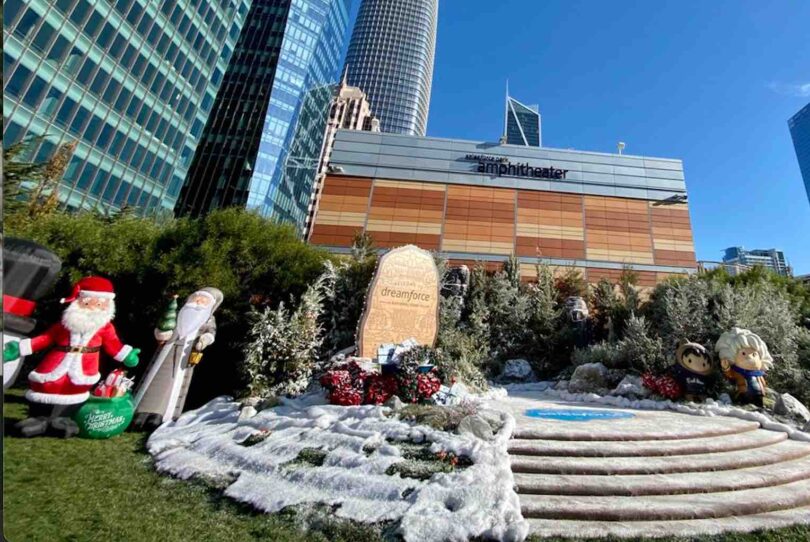 Those words from Salesforce CEO Marc Benioff struck a chord on Tuesday on the eve of the firm’s virtual Dreamforce To You kick-off keynote. It wasn’t an unexpected sentiment. Dreamforce is the key week in the Salesforce calendar, the culmination of 51 other weeks worth of prep that begins again as each year’s jamboree winds down. But this year…well, we all know about this year.

Jamboree is normally an appropriate epithet for Dreamforce. This is a conference that ticks the tech conference boxes and then some. It’s part leadership rally, part philanthropic exemplar, part 4 day celebrity-guest-stuffed party for tens of thousands of attendees from all around the world.

It’s the week in which you can’t get a hotel room in San Francisco for love nor money unless you booked it months ago; when the Uber rates go through the roof; when every bar is full of people grazing on nibbly things on sticks and sipping something fizzy courtesy of corporate hospitality; and when savvy city center San Francisco residents leave their cars at home because the roads are log jammed.

That’s what Dreamforce is most years. But not this year.

Of course, Salesforce isn’t alone in any of this. This has been the year of the virtual event as COVID-19 restrictions and health and safety precautions forced the cancellation of real-world conferences and forced companies online in a bid to provide an alternative to spending the week in a convention center in Las Vegas or Florida or wherever.

But putting Dreamforce online was always going to be a big ask. As someone who’s spent the best part of two decades attending the event, from its inaugural first outing in a downtown hotel ballroom through to the city-closing ‘happening’ that it had become by 2019, it was never going to be the same experience when logging on with a cup of tea from England.

That said, the show must go on – and Salesforce’s opening keynote did have more effort on show than a lot of other events this year. Again, that doesn’t surprise. The Dreamforce keynote is the hub of the week long gathering most years, the Circus Maximus of the conference with Benioff in the middle of the ring as cloudy ringmaster to fire up the Ohana. The real meat of Dreamforce lies in the breakout sessions around the labyrinthine Moscone conference center and in the myriad hotel function rooms conscripted into service for the duration, but the keynote is the beating heart. Sticking a webcam into Benioff’s back bedroom for a pre-recorded Zoom presentation was never going to suffice here. So as the man himself said on the eve of the keynote:

We’ve re-imagined how to do a conference. We’re not doing it like everybody else.

What we got was an outdoor event, live from a chilly looking San Francisco, with real people in Salesforce Park, socially distanced, but in the same location and talking to one another, interspersed with recorded demos and presentations from assorted Salesforce execs. We had Benioff front-and-center in a staged winter wonderland setting, complete with Santa Claus. We had customers talking about their usage of Salesforce’s offerings. We even had the celebrity contribution as James Corden opened the proceedings, while Lennie Kravitz and Metallica played us out. If they’d thrown in the mandatory cameo from Will.I.Am, almost every box would have been ticked.

For Dreamforce veterans, the content format was a familiar one – thanks to the Trailblazers for their efforts, “never been an enterprise software company that has grown so fast” boasts, a plug for the size of the ‘Salesforce Economy’, philanthropic exemplars – this year with a COVID bent as the normal tribute to third sector workers made way for thanks to frontline healthcare and emergency teams – and so on.

As for the new, well, inevitably there was Slack, the $27.7 acquisition of which was announced 24 hours earlier. As such, Slack founder and CEO Stewart Butterfield wandered into view, as other speakers did, from behind a backdrop of Christmas trees as the least unexpected special guest ever and getting somewhat over-excited about what he pitched as a landmark coming together:

This moment is one that we will remember a couple decades from now, I think this is like the IBM AS370, this is like VisiCalc hitting the Apple II and like the Windows 95 launch, like the invention of the cloud, like the invention of these things. I think this is a pivotal moment and the opportunity to really transform the way that we work so that we’re not as reliant on the physical address, that we can have a digital HQ.

Leaving aside the hyperbole, Butterfield argued the Salesforce/Slack combo met the needs of today’s companies:

At one end of the spectrum you have these systems, automated processes, machines talking to machines. A customer makes an order and your inventory is updated. Someone submits a ticket and that goes into the queue for response. One step up from that, you have these applications, wonderful applications like Slack, Sales Cloud, Marketing Cloud, Service Cloud, this whole layer that you interact with. Above that, there’s the conversations, the social part, the messy  decision making, the arguments…Slack, I think, has done a great job in taking that conversational level – the context, the decision making – and bringing it to the applications. You put those all together and you really have the opportunity for end-to-end digital transformation and that’s what’s really exciting.

We have been working for the past two years on probably the most significant technological shift in this platform since [the Salesforce founders] created it over 21 years ago…Simply put, we’ve been working to enable us to deliver Salesforce on public cloud infrastructure all around the world…We’ve had to completely re-architect Salesforce to work in this way. As a consequence, it’s horizontally scalable. That means that if you have a B2B company with 10,000 customers or you’re a B2C customer with 100 million or more consumers, you can now use Salesforce as your single source of truth for all of that data.

Thanks to our incredible partnerships with all the amazing public cloud companies around the world, we are going to deliver this in every region where you do business. This is already live. It’s live in India, it’s live in Germany and we’re rolling out in 10 countries next year. If you have data residency needs, Hyperforce is your key to bring in Salesforce where your customers are…It is 100% backwards compatible. Your apps will work with no changes you can benefit from all of this automatically.

Other product announcements emerging from the keynote were:

Customer exemplars have always been a critical element of a Dreamforce keynote and this year’s virtual gathering was no exception, again following a traditional format of a slick video for each example, followed up by an in-person chat with a key spokesperson. First up was the State of Rhode Island, a COVID-19 response use case that’s had a lot of air time this year, including here on diginomica. UK car firm Bentley Motors followed with a sustainability story – see separate article here – and finally telco AT&T, a deal signed earlier this year and flagged up by Benioff at the time as one of the largest transactions done by Salesforce.

It’s a massive transformation program to deliver a vision whereby every single customer touchpoint, from stores through apps to online commerce, has a complete view of the customers engaging with them. For staff within AT&T, it’s about moving away from a technology regime that involved them dealing with up to 20 different applications as part of their customer interactions.

As an industry, boy, we could sure do a better job of making our customers feel understood and valued. It’s a very competitive marketplace. We’ve got a lot of different products and services and we serve over 170 million customers. Our front line – our service professionals, our distribution channels, our sales leaders – they’re sitting out there on the front line struggling to have a single source of truth, to really be superheroes and excel and their ability to serve our customers.

The ability to have a tool that enables not only our customers, but also our employees to seamlessly work across a multitude of channels and a multitude of products in an effortless way, that really establishes a unique value proposition in the industry. [That] is what we now have, as a result of deploying the single source of truth and the Customer 360 platform.

That’s just the beginning, he added, taking an upbeat view of what’s to come in 2021:

With the momentum that we’ve enjoyed here in 2020 and the criticality of broadband services for all of our customers across this nation, we feel very, very strong and very optimistic about a nice 2021…We’re going to be in a really good position next year to serve and delight our customers.

It wasn’t Dreamforce and it did make me yearn for the damp and fog of San Francisco, but this was a very good stab at a Dreamforce avatar. Of course it lacked the atmosphere of the physical event, but there had clearly been a lot more thought put into this event than many others I’ve seen this year. Coming so late in the year may have helped here – plenty of examples of what hasn’t worked to be learned from on offer over the course of the past 9 months. Next up, in a couple of weeks, is the ‘meat on the bones’ I referenced earlier, with 4 days of breakout sessions. After that, who knows? But with vaccines imminent, maybe we’ll be able to get back to complaining about standing in never-ending lines at the Moscone Center this time next year!