A New Business Model With Help From CRM | Vendors 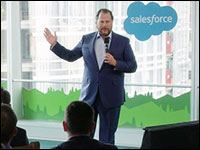 The company went through a more or less typical adolescence for a startup but beyond that it always had a sense of mission that it was changing the world. It was the first successful cloud company. In its rise most of its early competitors fell by the wayside, leaving it with the uncomfortable position of being a small branch on a big tree. It was susceptible to strong winds that luckily never materialized, and so a new generation of cloud companies eventually joined it.

Along the way Salesforce began branching out beyond simple cloud apps. It became a marketplace and a development platform, and in the process remade itself many times. It is still remaking itself today — though guided by cofounder and co-CEO Marc Benioff, it is more outward looking than ever.

For several years now, Benioff has dabbled in the changing aspects of economics and business theory. He started by advocating for a Fourth Industrial Revolution, arguing for a new beginning in the tech sector based on analytics, machine learning and IoT. Today he’s also trying to assemble multiple parts he sees in society into a new vision of business.

His new
book, Trailblazer: The Power of Business as the Greatest Platform for Change, combines his significant knowledge of business and economics with his long term affection for philanthropy into a vision for what capitalism can become.

Benioff recently has been vocal in telling us about the end of capitalism. In so many words, he recently
told an audience that “capitalism as we know it is dead.” He also
reiterated that viewpoint in a New York Times op-ed this week.

His opinion is well informed. Benioff was referring to the profits-only focus of the mid-20th century Milton Friedman era. He suggested that a new capitalism — based more on a statement issued by the Business Roundtable, of which he is a member — was coming into view. Simply put, the statement says that the monolithic corporation, oriented only toward making profits for shareholders, is passé.

The roundtable embraced the idea of corporations having multiple stakeholders: obviously shareholders, but also customers, employees, partners and suppliers — and importantly the communities where corporations abide. With that orientation it’s just as unacceptable to think about profits without thinking of employees and their welfare, as it is to consider production without also contemplating its impact on the environment.

Some might complain that this positioning is just a distinction without a difference, but it is more. We do what we think about, and we achieve what we can model. The Business Roundtable statement on the purpose of a corporation is a new model for new times.

Benioff and his book are about change, and it must be said that change isn’t always the order of the day. Social scientists have a term that fits just right here, “punctuated equilibrium,” which simply means that there can be long periods when little changes and others when everything is up for grabs.

To exemplify, consider your EKG. We think of our hearts as constantly beating and that’s true, but there is a relatively long period of rest between beats. The rest is the flat line, an equilibrium, and the beat is the punctuation.

In business we’ve been through a period of orderly progress, thanks to Moore’s Law, of improvements on the basic idea of a computer on a chip. Chips got more dense and powerful and, yes, less expensive, during that time, but the overall direction has been a more or less straight line.

Today is different. We’re confronted by multiple global challenges and global goals that will take all of us to invent our way out of, and most of them don’t directly involve computers and software. However, they all involve coming together and thinking outside the box we’ve become comfortable in.

The vision of a new capitalism isn’t secure — at least not yet. An article published in Harvard Business Review about a month after the BRT issued its statement makes this observation: “Despite clear opportunity, CEOs in 2019 acknowledge that business execution is not measuring up to the size of the challenge of the Global Goals — or to their previous ambition.”

The sticking point is investors. The old school Milton Friedman-esque purpose of a corporation still obtains. According to the Harvard Business Review article, “No matter what the BRT statement says, most companies won’t act aggressively unless they believe investors value their sustainability efforts. And while there is
actual movement in the investor community of late, as CEO of EDF Energy, Simone Rossi, says ‘There is a great disparity between the public statements put out by banks and investors and their apathy towards sustainability behind closed doors.’ No wonder only 12% of the CEOs cite pressure from shareholders as a motivation.”

Whether you call it the Fourth Industrial Revolution or something else — I reckon we’re beginning the Sixth Industrial Revolution but why quibble? — the dominant theme of the next few years is likely to be change, the punctuation. New models are likely to proliferate, and what’s not to like about one that recognizes the primacy of ordinary people as stakeholders? It’s the ultimate act of CRM.