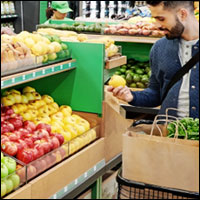 There are no cashiers. To make purchases, shoppers need an Amazon account and the free Amazon Go app from the Apple App Store, Google Play or Amazon Appstore, which they can download onto a recent-generation iPhone or Android phone. They swipe a QR code from the app to enter the store.

Sensors and overhead cameras track everything placed in or taken out of shopping carts. Amazon uses machine learning and artificial intelligence to enhance the shopping experience.

Amazon reportedly has plans to open more such groceries, and there are rumors that it will fully automate stores in its Whole Foods chain.

“Tech doesn’t call in sick or not show up at all, and it doesn’t steal,” she told the E-Commerce Times.

The future of retail “relies less on employees but more on technology to automate, personalize, and provide security and safety,” said Ray Wang, principal analyst at Constellation Reseach.

“Every retailer is worried about their labor costs, the amount of mishandling at checkout, and is looking at ways to increase revenue per square foot,” he told the E-Commerce Times.

Customers abandon carts or shorten shopping trips because of long checkout lines, costing retailers in the United States “tens of billions in sales,” observed Michel Wedel, PepsiCo Chair in Consumer Science in the
University of Maryland.

The resulting consumer dissatisfaction also “negatively affects the probability that they return, and their store loyalty,” he told the E-Commerce Times.

More than one-third (36.5 percent) of shoppers said they would spend more on products from a brand they were loyal to even if they were cheaper elsewhere, and almost 60 percent said they would refer friends and family to that brand, a recent Yotpo
survey found.

Using the Amazon Go app to enter the grocery store lets Amazon track customers’ locations in the store, their time spent there, and considerations and purchases, Wedel pointed out. “This makes it possible to deliver personalized discounts and recommendations based on customers’ data.”

“Cashierless checkout has the potential to merge the mobile and brick-and-mortar shopping channels,” Wedel remarked.

Amazon’s Go convenience stores
could be a US$4 billion business by 2021.

Companies working on autonomous technology for
cashierless stores abound, and retailers of all sizes are working to go cashierless.

Earlier this month, 7-Eleven piloted its first cashierless store, for employees only, at its corporate headquarters in Irving, Texas.

Sam’s Club began
piloting a cashierless store in Dallas in October of 2018.

Pittsburgh-based food, fuel and pharmacy retailer Giant Eagle began piloting a cashierless solution at one of its locations last July.

It plans to open more of these “nanostores,” and will implement the Aifi Autonomous Store Platform in its existing convenience stores.

AiFi claims its automated retail solution
can scale from a mom-and-pop shop all the way to a large retail store.

The Pros and Cons of Going Cashierless

Going cashierless is not necessarily applicable to all kinds of stores.

“For commodity goods like staples, it makes sense to move to this model,”Valoir’s Wettemann said, “but anyone who’s tried automated checkout with special items knows sometimes humans are needed.”

However, “You’ll need more technology investment up front and it’s less personable,” he pointed out.

Also, there could be a higher theft risk.

“Walmart has abandoned cashierless checkout in a large number of stores because of high levels of shoplifting,” the University of Maryland’s Wedel noted.

However, the shoplifting threat could be mitigated through the use of cameras, along with scanning and product verification technologies.

Depending on the success of Amazon Go, observed Wedel, “further rollout of the technology may be expected.”