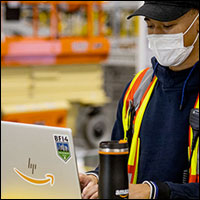 Amazon is rolling out a system that combines artificial intelligence and augmented reality to help workers maintain social distancing in the workplace, the company revealed Tuesday in its Covid-19 blog.

The new system has been deployed at a handful of Amazon buildings, but the company plans to deploy hundreds of the units in the coming weeks, the giant online retailer’s leader of robotics initiatives Brad Porter revealed in the blog.

He explained that his team uses augmented reality to create a magic-mirror-like tool that enables workers to see their physical distance from each other.

Inspired by existing use cases, like radar speed check signs, the system, named “Distance Assistant,” gives workers real-time feedback about their social distancing with the use of a 50-inch display, camera and computing device.

He explained that as people walk past the camera, a monitor displays live video with visual overlays to show if associates are within six feet of each another.

Green circles are displayed around workers who are six feet apart, while red circles are shown around those too close together.

The on-screen indicators are designed to remind and encourage workers to maintain appropriate distance from others, Porter noted.

The self-contained device requires only a standard electrical outlet, and can be quickly deployed to building entrances and other high-visibility areas, he added.

What’s more, Amazon plans to open source the technology so it will be free for other businesses to use.

“Nothing is more important than the health and well-being of our employees and we’ll continue to innovate to keep them as safe as possible,” Porter wrote.

Some employees, though, don’t think Amazon is doing all it can to protect them from Covid-19. Two lawsuits were filed against the company this month by workers alleging Amazon is putting workers and the public at risk by conditions it’s fostering in its warehouses.

It added that “cramped conditions, re-use of employee protective suits without cleaning, and quotas that make it impossible for workers to practice social distancing or sanitization” have exposed workers and the public to risk of catching the coronavirus.

In the other lawsuit, filed in a federal court in Brooklyn, N.Y., it’s alleged Amazon is fostering the spread of the coronavirus by mandating unsafe working conditions, that caused at least one employee to contract the virus, bring it home, and see her cousin die.

The lawsuit also contends that Amazon’s JFK8 fulfillment center, which employs some 5,000 people on Staten Island, has become a “place of danger” by impeding efforts to stop the virus from spreading and by boosting productivity at the expense of safety.

In a statement to the press, Amazon noted it spent US$4 billion from April to June on coronavirus initiatives, including $800 million during the first half of the year on temperature checks, masks, gloves, enhanced cleaning and sanitization, extended pay and benefits options, testing and more.

As for Distance Assistant, it shows how artificial intelligence and augmented reality can be worthwhile additions to the workplace.

“AR can be a valuable tool and assist people to maintain a social distance, not only in the workplace but in any location, including airports, shopping malls and other public places,” Eleftheria Kouri, a research analyst for ABI Research, a technology advisory company based in Oyster Bay, N.Y. told the E-Commerce Times.

Amazon isn’t alone is applying AR to social distancing. Kouri noted that Google has launched a web-based AR app called Sodar to help people maintain a two meter distance between each other.

Meanwhile, Snapchat, in collaboration with the World Health Organization, has introduced new lenses that assist users in visualizing distances.

AR smart glasses have already made inroads in the workplace and could be programmed to add social distancing to their repertoire.

If the glasses support spatial understanding, they can play an important role and assist employees in maintaining social distancing by overlaying safe virtual paths on the ground in a user’s field of view, Kouri observed.

“AR smart glasses are more efficient because they provide immediate feedback and notifications regarding social distancing, consequently a user is more proactive in maintaining a distance,” she explained.

She also pointed out that glasses can be used hands-free, unlike a cellphone, and are hard to ignore, unlike a 50-inch display.

“On the back of this global pandemic, we’re seeing increased activity around AR glasses, which includes headset makers exploring thermal imaging for disease detection,” said George Jijiashvili, a senior analyst with Omdia, a research and consulting firm in London.

“Nreal and Vuzix are examples of AR headset companies who have revealed thermal imagining capabilities as part of the effort against the pandemic,” he told the E-Commerce Times.

“It is important to highlight that the rollout and integration of AR glasses into workplaces has so far been relatively slow, due to the complexities of system integration and the initial cost,” he added. “However, the growing demand for innovative safety solutions in the current climate could accelerate AR’s adoption.”

The pandemic isn’t only driving rapid development of safety solutions. “I’ve heard from multiple organizations that digital transformation plans that they expected to take years to complete have been done in a matter of months because of the coronavirus,” said Liz Miller, vice president and a principal analyst with
Constellation Research, a technology research and advisory firm in Cupertino, Calif.

“With the coronavirus, you have to be digital, whether that’s empowering a digital workforce or utilizing new tools to manage and interrogate data differently,” she told the E-Commerce Times.

While AI and AR tools can contribute to keeping workers safe and productive, those contributions can come at a price for the individual.

“These AR solutions for measuring a safe social distance will raise similar privacy concerns as did the introduction of smart glasses and surveillance cameras in the working environment,” Kouri said.

“What Covid has done is elevate the awareness of many consumers to what privacy truly means to them,” Miller added.

Josh Crandall, CEO and co-founder of NetPop Research, a market research and strategy consulting firm in San Francisco sees solutions like Distance Assistant camped on the frontier of humanity’s tug-of-war with tech.

“On the one hand, using AI to maintain social distancing is undeniably beneficial,” he told the E-Commerce Times. “It’ll keep us safer in pandemic times.”

“On the other hand,” he continued, “we are becoming further entwined and dependent on data-driven, computerized solutions that are generic, devoid of contextual knowledge.”

“Without recognizing and appreciating the context in which decisions are made can lead to bias and false outcomes,” he said. “Thus, the application of this technology, while beneficial on the face of it, may lead to false accusations, social stigma or worse.”

“Silicon Valley has a long history of benefiting off of user data for profit,” he added, “and look where we are today.”