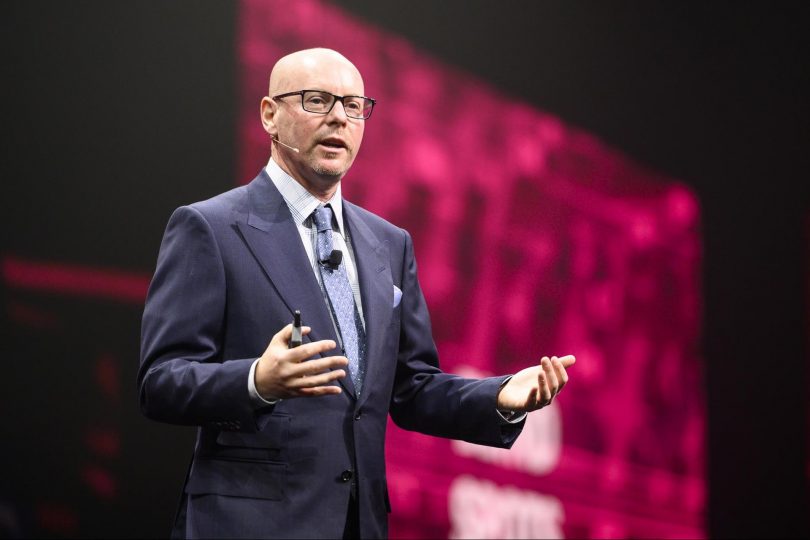 Oracle NetSuite Executive Vice President Evan Goldberg spent the opening keynote of SuiteWorld19 laying out a vision of how NetSuite customers can reach their â€œTrue Northâ€�â€”and how NetSuite can help get them there.

For the American Cancer Society, that True North is to â€œsave lives, celebrate lives and lead the fight for a world without cancer,â€� said Rob King, CFO of the 105-year old organization.

Distributing $4.8 billion in cancer research over the last 70 years, the organizationâ€™s breadth is in fact much broader, including physician guidelines, early prevention programs, a hope lodge program that houses patients receiving treatment and a transportation program that helps them get there.

â€œWeâ€™ve been through a lot of change in recent years,â€� King said. â€œWeâ€™re learning to work with our customers in the way they want to work. That required a financials system and CRM that mirrored how they wanted to work with us. Thatâ€™s the journey weâ€™ve been on for the past couple years. NetSuite is giving us visibility into our current organization.â€�

Overcoming the challenges that come with running a fast-growing business takes visibility, control, agility, productivity and collaboration, Goldberg said, the five attributes that are the blueprint for growth.

â€œIf youâ€™re here today youâ€™re likely trying to increase your impact,â€� Goldberg said. â€œThe journey is not a straight line. Weâ€™ve seen it in our own business.â€�

Indeed, NetSuiteâ€™s own journey has gone from a five-minute phone call between Goldberg and Oracle founder Larry Ellison, to an IPO, through a couple economic downturns to its eventual acquisition by Oracle. Goldberg recounted at one point early on, he was reviewing user message boards when one customer wrote, the day before Christmas Eve, that his website was down and he was going to lose out on a lot of business. With just a handful of employees, Goldberg was able to get it fixed by 10 p.m.

â€œThat was the moment we realized we were not providing a product, we were providing a service,â€� he said. â€œOur vision has remained consistent. Itâ€™s enabling our customers to achieve their vision through one system in the cloud. Thatâ€™s always been our True North.â€�

From Aunt Annie to Unified Accounting at Improv Troupe

When Kelly Leonard, executive director of The Second City, first joined The Second City, the famed Chicago improv troupe, he was a dishwasher, Jon Favreau had just joined the company, Bonnie Hunt was on the resident stage and Chris Farley was in the touring group. And the accounting was Aunt Annie.

â€œThat wasnâ€™t a platform, that was someoneâ€™s aunt,â€� Leonard deadpanned.

Now, The Second City has expanded its business model to include improv training at outside organizations to boost innovation and collaboration and leadership. It also recently implemented NetSuite.

â€œWe go into businesses to train people to unlock their ability to say yes,â€� Leonard said. â€œThe cardinal rule of improv is, you canâ€™t say no, you have to say yes and to explore, contribute and heighten the discussion. NetSuite allows our numbers to talk to each other in the same way we instill in people new processes to unleash their creativity. What NetSuite does is free us up so Iâ€™m nowhere near accounting.â€�

Adding new business models are just one lever for growth, but one that NetSuite is uniquely positioned to help with, Goldberg said. Features like support for the new lease accounting standards, a reallocation engine, the Oracle Bronto commerce marketing solution and SuiteBilling let customers add or adapt new business models. For example, NetSuite customer Roku has gone from delivering streaming hardware for cord cutters everywhere, to a streaming service that offers a one-stop shop service that manages a customerâ€™s streaming subscriptions.

Another lever for growth is global expansion. Since 2016, NetSuite has added operations in 21 new countries and now has customers in 212 countries and independent territories. It has also added 20,000 new international subsidiaries. Learn more about NetSuiteâ€™s added global features and new localizations.

Advice for Dealing with Growth

But growth also brings additional challenges. When Shawn Assad joined VICE as the chief accounting officer, the company was feeling the growing pains of expanding into 13 countries providing content across video, social, mobile channels and a magazine.

â€œMost struggle with the moment of when to scale a business,â€� he said. â€œThe founders of the business care most about the product and not the plumbing and wiring. Scaling the business is different than creating the business. You need to determine when is the right time to hire a CIO, a CTO. The more you wait the harder it is going to be to implement those new processes.â€�

Assad said he had to challenge some internal assumptions in helping to reconfigure the organization and be careful not to design roles around the wrong people and instead hire the right people. NetSuite has helped with the latest step in VICEâ€™s journey to its True North, to be a preeminent media company and content creation studio.

â€œWe went live globally in January of this year,â€� Assad said. â€œBefore that we had three systems that didnâ€™t talk to each other. It was hard for me to implement new processes. I didnâ€™tâ€™ have the right data to communicate to senior management.â€�