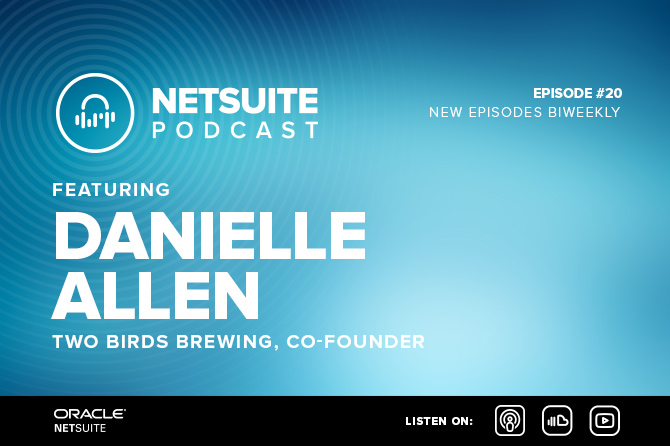 Posted by Kendall Fisher, Executive Producer and Host of The NetSuite Podcast

In 2011, Two Birds Brewing became Australiaâ€™s first female-owned brewery. Founded by Jayne Lewis and Danielle Allenâ€”best mates from collegeâ€”the company grew from a single beer to a range of five distinct flavors brewed year-round. They even set up a brewery, which theyâ€™ve affectionately named â€œThe Nest,â€� just outside of Melbourne in Spotswood.

On this episode of â€œThe NetSuite Podcast,â€� we sat down with Allen (a.k.a. â€œThe Other Birdâ€�) to discuss the conception of Two Birds Brewing, the journey the birds have flown with the brewery over the last eight years and the business systems that allowed them to achieve their five-year goals in just three-and-a-half.

But it wasnâ€™t always a slice of cakeâ€¦Or a beer on a hot day, in this case.

Two Birds faced unprecedented growth after the launch. Allen and Lewis quickly discovered their outdated systems and spreadsheets werenâ€™t going to keep up. Data is crucial to the companyâ€™s success, so they sought out to find a cloud-based business management solution to keep track of vital functionalities like inventory management, payroll and account purchasing.

Allen says she and Lewis ultimately chose NetSuite due to its true cloud foundation and real-time data. At the time, the co-founders were working in different states and needed a system that could allow them to do so.Â

â€œThe reporting out of NetSuite is second to none,â€� Allen says. â€œThe information is at our fingertips, and because itâ€™s live, we have all the information right there before we go in to talk to a customer.â€�

To hear Two Birdsâ€™ full story, tune into this podcast episode on Apple Podcasts, Soundcloud and YouTube. As always, donâ€™t forget to rate, review and subscribe!