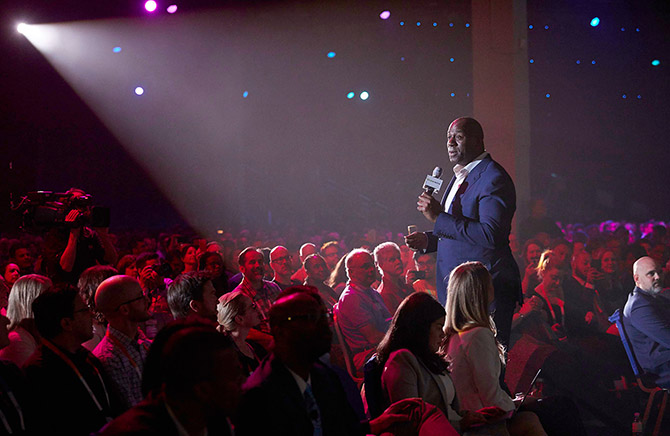 NCAA champion, NBA champion, NBA Hall of Famer, businessman, co-owner of the Los Angeles Dodgers â€“ Earvin â€œMagicâ€� Johnson has seen success everywhere his career has taken him. He shared some of the secrets to his success, and occasional failures in an engaging and thought-provoking address at SuiteWorld18.

Magicâ€™s basketball career helped set the stage for his success in business, he told attendees. After taking Everett High School in East Lansing, Mich. from a losing tradition to state champion, he went on to Michigan State and won a national championship over Larry Birdâ€™s Indiana State team, still the most watched NCAA championship in history. From there it was on the NBA, more match ups with Bird and five NBA titles.Â

It was basketball — the discipline, the work ethic, the drive â€“ that established Magicâ€™s personal brand. But when it came time to embark on the next chapter of his journey, as a business man, he found some new challenges.

â€œWhen I first started out, they held me being a basketball player against me,â€� he said. â€œThey wanted the autograph and the picture but they didnâ€™t want to give me the money. So, at first I was first funding everything with my own money.â€�

Shortly after his retirement from the NBA, Magic asked team owner Jerry Buss for the phone numbers of season ticket holders, some of the leading CEOs and businessmen in LA and asked them out for lunch to pick their brains. Unsurprisingly, they all agreed to have lunch with Magic. Hereâ€™s some of what he learned from them and from his own experiences.

Your competitor can make you better
Knowing that Larry Bird was out putting up 2,000 shots a day in the offseason, Magic felt he had to put up 2,000 shots per day.

Know your customer
One of Magicâ€™s earliest and most successful projects was to build a movie theater in urban LA. Conventional wisdom was that a movie theater wouldnâ€™t work in minority, urban areas, but recognizing the $3 trillion in spending power of minorities, he pushed ahead, Magic said. The theater was one of the 10 fastest growing theaters the country the next year.
Magic found similar success building 160 Starbucks over a six-year period in partnership with Starbucks CEO Howard Schulz. Â

â€œThe headline was, thereâ€™s no way minorities will pay $3 for a cup of coffee,â€� Magic said.Â

Regular SWOT Analysis
Magic conducts a SWOT (Strengths, Weaknesses, Opportunities, Threats) analysis on his business and himself every six months. It was two of his failures that helped to convince him of the need for self-evaluation, he said. In 1984, Larry Birdâ€™s Celtics defeated Magic and the Lakers in the NBA Finals, and Magic didnâ€™t perform up to his own expectations.

â€œMy rival is pouring champagne over his head and Iâ€™m crying in the locker room,â€� Magic said. â€œI had to take a SWOT of myself and I learned I wasnâ€™t as good as I thought I was.â€�

Another one of his self-proclaimed failures was also related to Bird. When Magic realized he and Bird had the highest selling jerseys in the NBA, he asked the commissioner why he wasnâ€™t seeing any of the money. A clause in the collective bargaining agreement meant the NBA got to keep all the proceeds. So, Magic set up his own stores selling hats, t-shirts and other goods. It failed miserably.

â€œI bought all these hats and t-shirts that I thought people would like,â€� Magic said. â€œTurned out I bought what I liked.â€�

Donâ€™t Fall in Love with Anything

â€œIf something comes along at the right price, I sell,â€� Magic said. â€œBe open to change. The market changes on us month to month, year to year. You have to be open to change your business.â€�

That even goes for the Lakers. When Magic saw that Lakers star Kobe Bryant was on the downside of his career with little in the way of talent to replace him, he sold his stake in the team. He turned around and, with an ownership group, bought the Los Angeles Dodgers for $2 billion, the largest amount ever paid for a professional sports team. The television deal the group signed afterwards came out at $9 billion and the 300 acres of land that went with the sale is now worth $2 billion, Magic said.

Parting Words of Wisdom
And the final piece of advice from Magic?

â€œHire people like yourself,â€� he said. â€œIâ€™m a worker I hire workers. I also hire people that are smarter than I am. I set the vision, they buy into that vision and then we work until we get it done.â€�