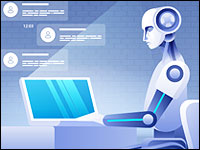 How do they really know? That’s the question that immediately comes to mind in reviewing the top-level data from
Voxpro’s recent survey of customers and their relationship with chatbots. The data show that 68 percent of consumers haven’t used chatbots to contact a brand. About 1,000 people answered the survey.

How reliable is that number, though? I’m not disrespecting Voxpro here — just the opposite. Isn’t it at least possible that some consumers have interacted with bots without realizing it? Of course it is, and it’s therefore reasonable that the true number of people who haven’t used a chatbot actually might be smaller.

Consider another data bit from Voxpro’s study: Fifty-six percent of survey respondents said they hadn’t used chat or other automated features because they prefer dealing with real people. That leaves 12 percent not using because… I don’t know.

Whatever the true measure is, within this narrow range, I’d say we’re right on schedule. It’s early days in the automated assistant game, and the numbers so far only confirm this.

We’re still working toward finding the right circumstances for the technology — another indicator that it’s early days. Despite this being early, however, the objective is still to find better ways to support the customer experience, though I’d prefer to say we’re trying to promote customer engagement.

“Engagement” may sound foreign to many ears when discussing having our machines interacting with customers — until you realize that engagement is meant to be a two-way street, and the only important direction is from customer to brand.

The purpose of chatbots, let us never forget, is to instill a feeling of satisfaction and even confidence in customers that will make them not only want to return but also tell others about oh, yes, their experience.

Other noteworthy data points include stratification by age cohort, with 32 percent of survey respondents overall reported using chatbots, but only 22 percent of those 65 years-old and over having done so. About half were concerned about retaining the ability to talk with a person if they couldn’t get satisfaction through automation. There’s nothing wrong with that.

Also, from the “stuck between a rock and a hard place” department, 45 percent of people 55 years old or older would prefer that a brand have their information before an interaction, presumably to save the time and effort associated with giving it. However, the same number — 45 percent — didn’t want a brand to store their information because they were concerned about data breaches.

Finally, it appears from the survey that 18- to 24-year-olds (32 percent to 45 percent) trusted brands with their data even less than older people. It used to be that younger people — we called them “digital natives” — were OK with sharing their info, but this study indicates that era might be over.

It might be best not to draw too much meaning from this study. It’s a snapshot in a rapidly changing market, after all, and the data undoubtedly will reveal different things next time.

Still, smart vendors might pull some knowledge out of it nonetheless. For instance, if people really don’t know if they’ve interacted with chatbots already, that’s terrific. It means the technology has reached the point of being good enough, and its utility likely will grow.

It also could mean that at least in some situations, chatbots are a really good fit. However, it also means that we still have work to do gathering customer data from other sources to build composites of customers (with artificial intelligence) that can work in a pinch.

All told, this is an interesting view into the workings of one of CRM’s newest branches, and it tells us that the market place is operating just as it should.