Consumers Like Augmented Reality More Than They Know | Trends 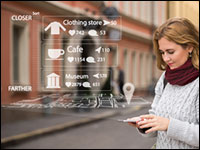 The augmented reality space continues to evolve. Device makers such as Bosch, Panasonic, Huawei and Pico are introducing significantly smaller and more powerful smart glasses and AR headsets, such as those demonstrated last month at CES 2020, one of the country’s largest consumer technology conferences.

Enterprise AR pioneer TeamViewer continues to pave the way in AR-based customer support, most recently through the introduction of its new TeamViewer Pilot smartphone app — which uses Android and iOS’ built-in augmented reality tools for two-way AR-based communication with a remote expert on a PC.

Getting a Handle on AR

What is augmented reality exactly? There’s not really an easy answer. Augmented reality uses a graphical display to superimpose images on top of actual “reality.” It can do so through multiple means — via smartphones, smart glasses, in-car displays, or powerful full-fledged AR headsets.

Where these products differ is in terms of their graphical capabilities and interactiveness. Smart glasses relay basic heads-up displays, projecting 2D information on top of the user’s view of the world. Smartphones and full-fledged AR headsets are more graphically powerful, capable of projecting complex interactive 3D images into the user’s view.

Consumers are most aware of smartphone-based applications, with the big two being social media app Snapchat and mobile gaming app Pokémon Go. While the Google Glass smart glasses briefly rose to worldwide attention in 2012, the product quickly left the consumer sphere after a privacy backlash. It pivoted into the enterprise market in 2014.

Although Google Glass captured the world’s imagination, it wasn’t the first product of its kind. Other companies — such as Vuzix — had introduced smart glasses and head-mounted displays (HMDs) more than a decade prior, originally for military use. The two leaders in the full-fledged AR headset space are Microsoft’s HoloLens and Magic Leap’s head-mounted virtual retinal display, but most consumers are unaware of these products.

AR has the potential to revolutionize the way consumers interact with technology, each other, and the world around them. With the smartphone market entering maturity, many see augmented reality devices as having the potential to replace smartphones and even personal computers in the future. First, consumers have to know what it is. Second, they have to use it.

Parks Associates tested consumer familiarity with the various augmented reality technologies and devices in one of our quarterly surveys of 10,000 U.S. broadband households. We found that only 12 percent of heads of U.S. broadband households considered themselves to be “familiar” with any one tested augmented reality device or technology. Familiarity was largely generational — a quarter of Millennials and a third of Gen Z heads of households consider themselves “familiar.”

While consumers reported the most familiarity with Google Glass, two-thirds claimed they were “totally unfamiliar” with the product. Augmented reality on iPhones and Androids fared worse, with roughly 80 percent of consumers claiming to be “totally unfamiliar” with those applications. While many consumers used AR-based functionality — such as filters in smartphone apps or pathing guidance with their vehicle’s backup camera — a large percentage did not recognize those solutions as “augmented reality.”

Consumer Interest in Use Cases

Once we explained what augmented reality was, we found that more than 60 percent of heads of U.S. broadband households were interested in receiving some type of information enhanced by AR.

Consumers showed interest in several types of AR use cases. Their most preferred use cases included navigation — receiving turn-by-turn instructions on a handheld or head-mounted AR device — as well as price comparison shopping tools that allow users to see which retailers are selling an item and for what price.

Beyond those top two, interest was split between measurement apps, exercise apps, and reviews of retailers and products. Consumers’ level of familiarity with AR made no difference in the order of preference for tested use cases. 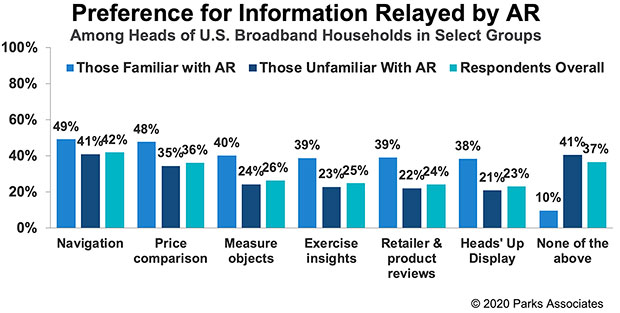 New form factors will have a difficult time winning over consumers who are used to their smartphones. Nearly 30 percent of consumers in U.S. broadband households found either smart glasses or headset HMDs “appealing” as rated on a 7-point scale.

Self-reported appeal did not vary significantly among the different HMD form factors. Consumers overall found normal-looking smartglasses about as appealing as a specialized headset.

However, there was a slight preference for normal-looking glasses, regardless of consumer familiarity with AR. Overall, the data indicates that even consumers who consider themselves familiar with AR have little recognition of the particular benefits or drawbacks of the different form factors.

Most of the developments in the AR market have been in the enterprise space. Companies have been trying to open up a consumer AR market for more than a decade and a half, but have made relatively little headway.

However, the potential is still there for something great. Awareness of AR as a whole is low, but consumers consider many AR use cases valuable. Growing awareness among Gen Z and Millennials signals that a sea change may be within reach.

Kristen Hanich is a senior analyst at
Parks Associates.