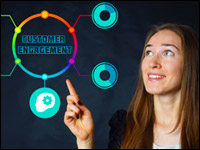 Brightback, a San Francisco-based company focused on customer retention for subscription businesses, recently published a report on customer churn and what more than 400 subscription companies say they’re doing about it.

Its findings are in line with many other sources I’ve been writing about recently, and the data deserves an examination.

First of all, we’re way past the point where subscription companies can expect to sign all of the new customers they need to replace those that, for various reasons, decide to end their relationships. In fact, it’s possible that time never existed, for the simple reason that attracting new customers is expensive compared to keeping those you have.

There’s no doubt that customer retention now has a place of primacy in most subscription vendors’ planning, though it’s anything but clear what the best approaches are. After all, different companies have different needs driven by products, customer bases and the like.

The interesting thing about Brightback’s report, though, is that retention — not new customer acquisition — is expected to drive the lion’s share of growth this year. That makes sense, because existing customers represent a fertile field for upselling and cross-selling.

Moreover, they represent an audience with a low cost of sale, since by definition an existing customer already understands a company’s product offerings and way of doing business, as well as how to come up to speed. So a sale to an existing customer can be more profitable than a sale to a new customer, which can cost more for sales and onboarding.

The indication from such data is that in many markets we’ve entered a zero-sum condition in which new customers come not from the uninitiated but from competitors. So, a vendor’s first job is to keep churn and attrition low, while its second job is to do what it can to steal customers from competitors. In fact, 62 percent of those surveyed rated customer retention a higher priority than customer acquisition.

Even a casual look at the data reveals that subscription vendors could be doing more to retain customers. For example, 96 percent of respondents said that customers canceled for reasons that could be finessed.

Perhaps that isn’t happening enough because vendors haven’t figured out the whole zero-sum angle. Also, no single department owns the churn problem, though 80 percent of B2C companies and 69 percent of B2B companies said they published churn target. No news on how many achieved it.

The respondents said that up to four different departments had some responsibility for churn, including customer success 27 percent, sales 20 percent, operations 18 percent, and marketing 17 percent.

Those actions take place in the rearview mirror and have little effect on keeping a customer in the stable. That’s especially true for the second most popular tactic of better tracking why customers cancel. What’s needed is churn prediction — but that idea captured only10 percent of the survey’s responses — and shifting from reactive to proactive churn management, which got a dismal 9 percent.

What’s most disconcerting is the turn to loyalty programs and the like. I wrote a book about loyalty a few years ago, and not much has changed. For the most part we still do it wrong. Loyalty programs are a form of discount, and while they may save a customer from churn, they also teach the customer how to obtain a good discount.

Even if the churn rate is acceptable in such cases, the profitability isn’t. Too often a company ends up with two classes of customer. One customer is in good standing and happy to pay the going rate for products and services. The other customer is more of a zombie hanging around the customer base half dead and not contributing adequately to the bottom line.

If a vendor is going to overcome churn and boost retention, it’s not going to happen through discounts and loyalty programs. It has to happen with engagement — getting into the customer’s face in an unobtrusive way to get a better sense of why customers stay and who is dissatisfied enough to leave, and doing it in enough time to execute a plan.

Yet fully half of the survey respondents said that discounts and personalized offers based on the reason for cancellation were their top approaches to averting churn.

It’s time to take the next step and become proactive about churn. Anticipating churn and monitoring KPIs isn’t hard. Most companies in the survey said they had meetings to discuss churn at least quarterly if not more frequently. That’s a good start since you can’t deal with a problem you don’t know about.

Hanging onto customers ought to be easy, given the data we collect and the available tools. It would help to give the assignment to one department and for that department to take the job aggressively, but that also enters into another challenge.

Too often the sales group will see churn as a sales problem, and likewise all the others. It’s the story of the man with a hammer who sees the world’s problems as a nail to be pounded.

Customer success might be a good fit for the job, as by definition a customer that’s not successful will be first to cut losses come renewal time. This probably means giving a bigger budget to customer success, and there’s no telling if companies are on board with the idea.

Having a 90-day window is important for customer retention. Metrics that can spot a potential churn 90 days out used to be a tall order, but today it’s very doable. The great challenge is organizing and motivating the organization to deal with this very real threat. Although not enough has been done yet, according to the data, that appears to be changing.