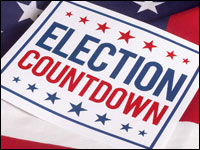 Defending against foreign interference in American elections is one of the priorities Facebook CEO Mark Zuckerberg has been focusing on this year, he said in a post Wednesday.

The issue is highly sensitive, and it is one that has garnered a great deal of discussion in media reports and on the Web. Special counsel Robert Mueller warned in a court filing this spring that foreign interference efforts were still going on, and President Trump earlier this week signed an executive order that would punish such interference with sanctions.

Using machine learning, Facebook identified and removed more than 1 billion fake accounts between October and March. It has doubled its safety and security workforce over the past year, from 10,000 to more than 20,000. It has been identifying and removing accounts associated with networks of people launching coordinated campaigns to distribute fake information.

Advertisers running political and issue ads on Facebook now must disclose their identities. Ads are put into a searchable public archive. Also, businesses whose ads touch various issues now must get verified.

Facebook this spring set up an independent election research commission to independently study its role in elections, including its effectiveness in preventing abuse.

Facebook needs “to constantly improve and stay one step ahead,” Zuckerberg said, an effort that will “take continued, heavy investment in security on our part as well as close cooperation with governments, the tech industry, and security experts, since no one institution can solve this on their own.”

The situation “is basically an arms race, and Facebook is massively overmatched,” said Rob Enderle, principal analyst at the Enderle Group.

“When you’re rolling against the governments, the efforts of any company are likely inadequate,” he told the E-Commerce Times. “Governments can continue to swap out bad actors and even place them in country or in the company, making identification and elimination nearly impossible.”

Also, posting on Facebook is free, so rogue nations “can also use deep learning and machine learning to massively increase the frequency of posts and the variety of posters,” Enderle said. “It’s like Whack-a-Mole but with a million moles that are feverishly reproducing.”

Further, rogue countries can use other forms of communication and social media sites to engage and trick real people into posting fake information and political messages on their own Facebook accounts, he noted.

“We have longstanding relationships with other technology companies to combat security threats, and we have increased our collaboration over time,” said Facebook spokesperson Jay Nancarrow.

“In just the last months, Facebook has helped convene meetings with other technology companies to discuss election protection efforts and combating cybersecurity threats,” he told the E-Commerce Times.

The company has signed the
Cybersecurity Tech Accord, and has been “working with the FBI, U.S. Department of Homeland Security, and others on election protection efforts,” Nancarrow said.

“There’s more to do, but we are encouraged by actions like the creation of the FBI foreign influence task force,” he added.

However, fake accounts continue to slip through without detection, and Facebook has taken down legitimate users mistakenly, Zuckerberg admitted.

“These systems will never be perfect,” he acknowledged, “but by investing in artificial intelligence and more people, we will continue to improve.”

Facebook’s coordination with governments and industry has improved, according to Zuckerberg, but he called for better coordination among governments, tech companies and independent experts such as the
Atlantic Council. Facebook this spring signed an agreement with the council to prevent election interference.

“Governments have no business involving themselves in such interactions,” he told the E-Commerce Times.

However, Facebook has shut down several conservative commentators, “and that’s not right and shouldn’t be,” Wang said. “Good luck in determining what’s hate speech and what isn’t.”

American conservatives who believe that Facebook and other tech companies have censored their posts without good cause have filed a US$1 billion lawsuit against them.

Meanwhile, the United Nations has found that Facebook’s definition of “terrorism” mutes dissent.

“These are legitimate concerns, but nobody’s forced to use Facebook,” noted Frost’s Jude.

Whistling in the Wind

“If Facebook’s attempting to protect elections, it has to be very clear about how that impacts its users,” Jude said. “If Facebook’s a free speech zone, it shouldn’t police anything. That should be up to … well … police.”

Social media sites “say they are open forums, but they’re really advertising companies with a vested interest in consumer perceptions,” he pointed out. “They should completely open their forum to everything, then tell the government if it wants to police discourse, to get a warrant and go for it.”

Facebook’s attempts to combat fake news are ineffective, according to Jude, because “there are too many ways around anything they might build.”