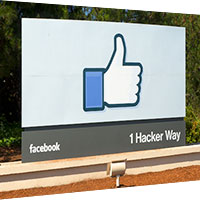 Facebook has set up American Edge, a political advocacy group for the high-tech industry, which is drawing scrutiny from United States lawmakers, The Washington Post reported Tuesday.

American Edge will fund ad campaigns and studies by academics to push its efforts, according to the paper.

Facebook is working with a diverse group of stakeholders to build support for the tech industry, it told the Post. Though it acknowledged its leading role in American Edge, the new coalition is just one of many technology industry-promoting efforts it supports.

Facebook formed American Edge as a nonprofit organization in December, and registered an accompanying foundation in April.

The setup lets American Edge advertise and raise money without having to disclose all of its donors, according to the Post>. Other powerful organizations, including the National Rifle Association, operate in a similar way.

“After earlier calls for regulation by Mark Zuckerberg, for Facebook to now set up an NRA-style lobbying effort to avoid regulation speaks louder than words,” said Marietje Schaake, international director of the
Stanford Cyber Policy Center.

“U.S. lawmakers are warned,” she told the E-Commerce Times.

High taxes, regulation, the high cost of housing, crime and homelessness have reduced the lure of Silicon Valley as a high-tech hub, observed Mike Jude, research director at IDC.

“Other states are stealing high tech away,” he told the E-Commerce Times.

“Wherever the academic environment is equivalent and taxes and the cost of labor are low, mini-Silicon Valleys are popping up,” Jude said. “My personal belief is that Silicon Valley is doomed.”

American Edge reportedly aims to convince policymakers that Silicon Valley is essential to the U.S. economy and the future of free speech — an argument that appears to be gaining traction.

“We’re getting so much information from social media that Silicon Valley is material to the future of free speech,” remarked Rob Enderle, principal analyst at the Enderle Group.

However, American Edge likely will put out false information and attack opponents, and that could harm free speech, he told the E-Commerce Times.

Still, if antitrust actions cause the downfall of companies that distribute or control information — Alphabet, Twitter and Facebook — the result “would be a sharp reduction in our ability to share and spread our ideas,” Enderle pointed out. “The other forums just don’t have the same reach that primary social media firms enjoy.”

Tech companies “don’t give a fig about free speech,” IDC’s Jude remarked. “They made the mistake of preaching free speech and are now trying to reconcile that with things like data collection, targeted advertising and censorship.”

Facebook eventually might pay people to use their site in exchange for providing it with their data, Jude suggested.

That said, if Facebook “just duplicates what the NRA has accomplished, the effort could be extremely powerful,” Enderle said.

Members of the American Edge Board

The following have been named as American Edge board members:

Papa and Carney are Democrats; the others are Republicans.

The board’s makeup “would imply that the group will tend to be conservative in its sights,” Enderle observed, “but that generally would be true of most corporate efforts like this.”

Silicon Valley “has managed to tick off both sides of the political spectrum,” Jude pointed out. Meanwhile, Congress is “starting to worry about the influence that Big Tech could have on political discourse.”

Lawmakers from both sides of the aisle, as well as several government agencies, have launched antitrust and other investigations against Facebook, Google, Microsoft, Apple and Amazon.

Facebook’s launch of American Edge might be an attempt to play defense. Fifty-five percent of tech executives participating in the CNBC Technology Executive Council
Q3 2019 survey said Facebook had the most to lose from the government’s antitrust probes, while Google and Amazon were a distant second and third.

That possibility “is likely at the heart of Facebook’s concerns, and fear does tend to loosen up the purse strings,” Enderle suggested.

“It’s an interesting and bold move, but Facebook has been pretty clueless when it comes to public perceptions in the past, suggesting it’s more likely to do the firm damage than to benefit it in the long term,” he said.

In the short term, Congress is focusing on the upcoming presidential election, Jude said. “Post that, there may be some interest in pursuing antitrust actions, especially if there’s a new administration.”

A 505(c)(4) organization must not be organized for profit, and must be operated exclusively
to promote social welfare.

Critics have expressed fears that Facebook will be able to distort and shape the public dialog at will.

However, American Edge “is not a PAC, nor is it a public education business,” Jude said. “It is simply an advertising company.”

Facebook “is social media and social media is advertising, he added. “The company’s trying to deflect opprobrium the only way it knows how — by starting a new advertising company.”

Advertising companies can hide their managers behind a corporate veil, Jude noted, so long as they are private.