Summary:
FedEx doesn’t need Amazon, it says. It might need to face up to its fears about the e-commerce giant however. 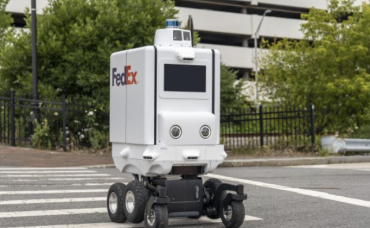 How times change. Back in 2016, Fred Smith, the outspoken CEO of FedEx confidently declared that there was no reason to fear Amazon as a competitor:

The concerns about industry disruption continue to be fuelled by fantastical – and let me emphasize I chose this word carefully – articles and reports which are devoid of in-depth knowledge of logistic systems and the markets which FedEx serves.

I suggested round about the same time that:

Flash forward to this week and Smith strikes a slightly different tone:

We can’t make the competition go away.Â I wish they would, you know, just leave the field. Theyâ€™re very good operatorsâ€¦we basically compete in an ecosphere that’s got five entities in it. There’s UPS, there’s DHL, there’s the US Postal Service, and now increasingly, there’s Amazon. That’s who we wake up every day trying to think about how we compete against and give the best services to our sales force.

Changed days indeed, but also perhaps a long overdue acknowledgement of market realities and one that recent events have made inevitable. Back in June, FedEx ended its relationship with Amazon in relation to the air-delivery part of its business, following up in August with a full-scale termination of its contractual obligations to the e-commerce behemoth.Â  The FedEx party line has been that Amazon only represented just over one percent of its revenues and there wasÂ Â a lot of cost related to servicing the contract. Smith takes the viewÂ that there will be a short term hit, but long term severing ties with Amazon will be beneficial:

While the Amazon contract represented only a small proportion of our revenues, the nature of our business is such that near-term profits will be adversely affected since the last bit of volume has significant flow through to the bottom line. However, we have closed additional business to replace this traffic, which is being onboarded and we are taking out significant costs which were unique to Amazon’s requirements.

In practice, Amazon has grown its own delivery and distribution ambitions to such an extent that FedEx cannot ignore a harsh reality – itâ€™s become the competition. And Amazon knows it too. Its 10k filing with the Securities and Exchange Commission include the statement that it identifies as competitive rivals:

Companies that provide fulfillment and logistics services for themselves or for third parties, whether online or offline.

All of which leaves FedEx looking for new sources of growth in an e-commerce economy where delivery – and same day delivery in particular – is becoming what the consumer expects to be given. Thatâ€™s going to mean upping investment in new offerings to meet growing demand. Smith says:

We plan to add capabilities to enhance our services for the rapidly growing e-commerce market, which we expect to grow in the United States from 50 million to 100 million packages per day by 2026. These shipments will be destined increasingly to residences, and one in four packages will be short distance deliveries. While the backbone of FedEx is the B2B business, our unmatched ground and express line haul and short networks carry both B2B and B2C commerce with great efficiency. The lead in e-commerce we have launched or announced FedEx extra hours and an express service which provides nightly pick up with the delivery the next business day.

According to FedEx CMO Brie Carere, the firm totally understands the problem it faces:

In the US more than 90% of incremental domestic parcel volume from 2018 to 2026 is expected to come from e-commerce period. This is why we are busy building a world class portfolio of solutions to best serve thousands of retailers in this space.

She provides a couple of examples to back up her point:

We just forged a new strategic delivery partnership with Dickâ€™s Sporting Goods. The majority of their spend with us is on their e-commerce business by leveraging our portfolio of ground commercial, home delivery and express services. They are getting the product to their customers faster, which of course is paramount to them and to their business growth.

Another retailer we work closely with is Chewy. Chewy was one of the first home delivery customers that benefited from our Six-Day expansion. Due to their one to two-day shipping commitment and 24×7 operations, they are ready to take full advantage of our new Seven-Day service. Retailers and brands, large and small have recognized our commercial teams for their partnership and for our ability to help them grow their business and successful compete in the market.

Carere makes the bold claim that FedEx can point to â€œrapid innovation we have brought to e-commerce in the last three yearsâ€� and promises more to come, citing its Seven Day service from FedEx Ground as an example:

We are already faster than the competition by at least one day in 26% of the lanes. This move will further speed up our network and allow us to continue to gain market share.

Speed matters of course, but does it count as innovation? A better example might be found in Roxo, the FedEx Same Day robot which is now being trialed in three markets – Memphis, Tennessee, Plano, Texas and Manchester, New Hampshire.

Roxo – Portuguese for purple, apparently, the FedEx corporate livery – is able to carry parcels weighing up to 100 pounds, so itâ€™s pitched at delivering goods such as pizzas, groceries and smaller packages.

Developed in association with the DEKA Research & Development Corporation, the FedEx trials which kicked off this month are intended to test the botâ€™s ability to navigate urban environments and deal with curbs, road traffic and pedestrians. Itâ€™s not fully autonomous – although thatâ€™s clearly the ultimate goal – and requires a remote controller.

But Roxo is a good example of disruption to the traditional operating model that FedEx needs to embrace. Smith has been commendably outspoken over the years and continues to be brutally frank on a number of key topics, not least FedExâ€™s opposition to the Trumpian trade war issues with China.

There is however still a sense that FedEx has been the delivery and distribution industryâ€™s version of King Canute, commanding the Amazonian tide to turn back and ending up getting its corporate feet very wet indeed. Its share price went into freefall this week over the latest set of pretty dismal quarterly numbers. FedEx has big problems and it needs to get its e-commerce house in order in short order because the Amazon competition isnâ€™t going away.

Turns out â€˜Uberisationâ€™ mattered after allâ€¦