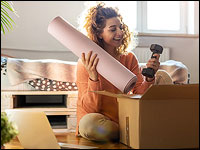 As traditional gyms, fitness centers, and health and wellness studios shutter during COVID-19, technology has kicked in to provide a replacement or an alternative for growing numbers of online shoppers.

Research based on eBay’s fitness sales data shows gains of thousands of percentage points during the pandemic lockdown compared to 2019. Several other marketing studies duplicate those e-commerce results.

That is not a misprint. Sales of key at-home fitness equipment broke all sales records, especially since March, eBay sales data and other reports revealed.

Consumer spending habits across the U.S and throughout many other countries in the past six months have drastically changed. Much of that change is reflected in a mass consumer migration to e-commerce.

ACI Worldwide, which handles electronic payments for more than 6,000 organizations around the world, found that June produced the largest increase in e-commerce sales since the start of pandemic restrictions.

One of the biggest surprises in that research was the vanishing inventories of outdoor goods and electronics in vendors’ warehouses.

At eBay, for example, sales of dumbbells during the 2020 lockdown period increased by 1,980 percent compared to March and April in 2019. The sales of weight plates, meanwhile, increased by 1,355 percent in the same period.

The eBay data analyzes more than 3 million sales. That research shows the most popular items during the lockdown periods were dumbbells and activity trackers, as people became more health conscious. This chart shows the sales increases for the top 10 fitness products consumers purchased on eBay this year over last year.

eBay’s research is not an anomaly. Several other studies tracking new consumer shopping patterns for in-store and online purchases are in flux. But the trend clearly shows migration to e-commerce as a preference over brick and mortar stores for these and other items.

It is a bit early to see where all this will end up. Traditional stores are closing as the ones that remain open are racing to establish an e-commerce foothold, agreed Amy Rogoff Dunn, partner at Kelton Global, a consumer insights and strategy consulting firm.

“We are seeing e-commerce expanding. We are also seeing new opportunities in brick and mortar stores. It will probably take a year from now to see where things wind up,” she told the E-Commerce. Times.

Sales for at-home fitness equipment increased dramatically. So did sales of online and digital video products. The use of live, virtual, and on-demand exercise programs seems to be a growing outlet for consumers buying their at-home exercise gear.

“We’ve seen an increase of 2,000 percent in online bookings since the lockdown was introduced compared to the same period in 2019. It’s an incredible increase and one that proves the world is staying on top of health,” said Ollie Bailey, CEO and founder of Gymcatch in a written announcement about eBay’s fitness sales research.

The striking increase in the online purchases of gym equipment for home use is not an isolated phenomenon, according to eBay. Gym equipment sales show similar results for consumers in other countries. This chart from eBay’s research shows the top 10 fitness products sold in the early months of the pandemic.

The trend is similar in other markets where gyms and fitness studios were or are closed because of COVID-19 related restrictions, according to eBay’s PR team in a written response provided to the E-Commerce Times by company rep Agustina Perez Derron.

“We’ve certainly seen similar patterns in France, Italy, and the UK to name a few,” the team said.

eBay expects to see a continuing residual from consumers relying on the online merchant for future sales as the pandemic dies off. But eBay does not expect that consumer buying trend to be permanent.

“We also assume the demand will return to a near pre-lockdown level once gyms across the country will open again. This is actually something that we are starting to see happening already,” the eBay team added.

ACI Worldwide released sales data it compiled from its own worldwide merchant base in its own report on July 14. That report shows a 117 percent spike in athletic equipment. The report also shows a continuing spike in all global e-commerce sales for June 2020 compared to last June.

That increase is the largest year-over-year increase in sales since COVID-19 restrictions were put in place in March. The analysis by ACI of hundreds of millions of e-commerce transactions from global merchants included a large increase in athletic, footwear, and sporting goods sales.

Outdoor equipment was among the most popular purchase categories according to ACI. Personal protective equipment and DIY items also continued to be among the commodities most-shopped online last month.

The results of ACI’s sales analysis reinforce what eBay found on the peak consumer interest in buying athletic equipment. That research shows a trend toward continued increases in the sportswear and athletic products sector month-over-month since COVID-19 restrictions were put in place.

“In April, we saw a big jump [114 percent] in the sector followed by a bigger increase [216 percent] in May. In June we saw it dip slightly, but still, a significant increase [117 percent],” Erika Dietrich, vice president of Global Fraud Prevention Risk Services at ACI Worldwide, told the E-Commerce Times.

The consumer trend for buying athletic equipment online for home use is not showing signs of abating, according to ACI’s sales analysis.

“We are still seeing sales of health and gym equipment increase in June as the pandemic restrictions ease up. In particular, as the easing of restrictions coincides with the summer holiday season, we’ve seen outdoor equipment become the most popular of purchase categories, with an increase of 10 percent in June compared to an eight percent increase in May,” Dietrich noted from ACI’s findings.

Additionally, even with the loosening of pandemic restrictions, numerous merchants are seeing a higher percentage of outdoor goods being purchased as compared to this time last year, added Debbie Guerra, executive vice president at ACI Worldwide.

Part of the Big E-Commerce Picture

The large online sales increase for gym and sports equipment in recent months is not an isolated event, according to marketing researchers. It reflects a growing trend to rely on e-commerce as the primary shopping path.

“The pandemic has changed consumer behavior, and we expect that many of these consumers won’t be going back to the way things were,” said ACI’s Dietrich.

The growth rates in online shopping seen across various sectors reflect how people around the world have been adapting to life in quarantine, she noted. Increases in other areas like outdoor equipment and sports took over consumer spending.

“Millions of consumers are now used to getting groceries and many other essential items delivered to their doors, and consumers who were reliant on cash before the crisis have switched to digital payment methods for safety and convenience,” Dietrich concluded.