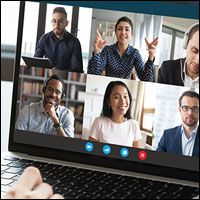 Google is integrating its
Google Meet videoconferencing application with Gmail, and it already appears as an option in some users’ accounts.

Google last week announced that it was making the service free for everyone.

It will be available to everyone in the coming weeks,
on the Web and through mobile apps for iOS and Android. Users will be able to start or join Meet videoconferences from within Google Calendar as well.

Meet will be available to anyone with an email address, said Javier Soltero, general manager of G Suite. Users will need a Google account to join meetings created by individuals.

Among the new features Google announced are tiled layout for up to 16 simultaneous participants, higher-quality video content with audio, low-light mode, and noise cancellation for filtering out background noises

“Google Meet has been playing catch-up to some degree with the features and functions users came to expect, thanks to experiences in Zoom and in Microsoft Teams,” remarked Liz Miller, principal analyst at Constellation Research.

“By addressing the issues users had been requesting, including the ‘Brady Bunch’ tile view and noise cancellation, Zoom has proven they are listening to users and trying to move fast to close the gap on the enterprise side,” she told the E-Commerce Times.

Meetings are limited to 60 minutes for the free version of Meet, but the time limit will not be enforced until after Sept. 30, Soltero said.

Meet is competing with the current king of the hill, Zoom, as well as with Microsoft Teams and the recently announced Facebook Messenger Rooms.

Google Meet “will work with many of the cross-standard conferencing sites like those from Polycom and Cisco,” he told the E-Commerce Times. “As a result, it should rank towards the top of the set and be safer than more consumer-focused products like Zoom, FaceTime and Facebook’s Messenger Rooms.”

Google launched Meet in February 2017 as the enterprise version of Google Hangouts.

Meet has various default safety-on measures, including host controls, complex meeting codes, encryption of video meetings in transit, and recordings both in transit and at rest.

Meet data is not used for advertising and Google does not sell Meet users’ data to third parties, Soltero said.

“I’ll take Googles promise of not selling data to a third party more seriously than a similar pledge from Facebook, but that isn’t saying much,” Miller said. “Google’s greatest consumers of data are their first party properties — so lots of flags and questions there.”

Meet in the G Suite

G Suite users already have access to Meet, which admins can enable by following instructions in the
Meet Help Center.

Through Sept. 30, new and current enterprise G Suite customers get free access to Meet’s advanced features, such as the ability to livestream to up to 100,000 viewers within their domain.

Also through Sept. 30, existing G Suite customers will get free additional Meet licenses without any amendments to their current contract.

Meet is included in G Suite for Education for free.

G Suite Essentials will be available free to Enterprise G Suite customers and at no cost to other organizations through Sept. 30.

Meet’s peak usage has grown by 30x since January, according to Soltero. As of last week, Meet’s daily meeting participants surpassed 1 million.

The application is hosting 3 billion minutes of video meetings and adding roughly 3 million users every day, he said. However, it’s not clear when the influx began.

It’s also not clear how Google defines a “user.”

Zoom is currently the videoconferencing application to beat, in terms of daily meeting participants.

It recently released v5.0 with a slew of security and privacy improvements.

Oracle last week announced Zoom had selected it
as a cloud infrastructure provider.

This will let Zoom scale to meet demand, and ensure reliability and security.

Zoom has gained traction as the preferred videoconferencing solution for many small and mid-sized businesses.

Meanwhile, Microsoft has been beefing up its Teams application. Teams now offers instant translation, and access to more than 400 third-party apps in the Microsoft Teams app store.

Microsoft has released an “end meeting” feature for meeting organizers, and this month globally rolls out its raise hand feature as well as participant reports that include join and leave times for participants. Later this year, it will launch real-time noise suppression, similar to the Google Meet feature.

“Its chief problem is that it’s from Google and there’s a trust issue associated with Google and potentially sensitive information,” he told the E-Commerce Times.

“Meet’s transcribe ability is especially problematic since the output is machine readable and might be used inappropriately,” Jude noted.

“Zoom and Facebook Rooms are basically toys right now, while Team is a business tool,” he added. “The verdict’s out on Meet, but it will likely resonate with some businesses and may get some currency in the consumer space.”

Microsoft Teams “is best for internal meeting between working groups where it’s widely used and well distributed, and where security is very high,” Enderle said.

Facebook Messenger Rooms is for families and friends wanting to stay in touch, he continued. Zoom is “for small firms where security isn’t a big concern,” and Meet “would be best for most companies, but especially for those that use G Suite.”

Google Meet and Microsoft Teams will be favored most strongly by users of their respective productivity suites, suggested Dion Hinchcliffe, principal analyst at Constellation Research.

Zoom “is the egalitarian choice and is arguably the best-of-breed solution in the industry,” while Facebook Messenger Rooms “is a personal video meeting tool” that’s not intended for business and lacks key features enterprises require, he told the E-Commerce Times. It’s at best an SMB solution where enterprise features like session recording are not necessary or wanted.