HBO Fires Back at Dish in Blackout Tussle | Service Providers 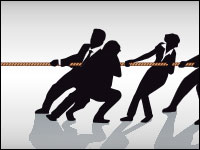 HBO chief Richard Plepler on Wednesday issued a response to
Dish CEO Charlie Ergen’s claim that the ongoing impasse between the companies was the result of a purely anticompetitive play on AT&T’s part.

It was Dish that dropped HBO and Cinemax signals at midnight on Oct. 31, blacking out programming for subscribers, Plepler said.

That was the first time in HBO’s nearly 50-year history that any pay-TV service dropped the premium channel from its lineup.

Negotiations between the two companies broke down last week, and in a
Wednesday earnings call, Dish’s Ergen blamed the situation on the recent
merger of AT&T with HBO parent Time Warner.

The sticking point in the heated negotiations was HBO’s insistence that Dish commit to paying for a minimum number of customers, even if far fewer actually wanted
the premium channel.

AT&T sought the contract provision as a way to support its HBO free for life offering to DirecTV customers, Ergen suggested.

However, revenue of US$3.4 billion for the quarter, as well as earnings, topped analysts’ expectations.

Besides HBO and Cinemax, high-profile channels currently
missing from the Dish lineup, include Spanish-language Univision, which went dark
in June following a testy negotiation.

Dish subscribers received
the channel through the DishLatino package. That breakdown
occurred in part due to Univision making some its programming — notably
soccer — available for free via Facebook Watch and other online
outlets.

That diminished the value of Univision, according to Dish.

For its part, Univision said it extended an olive branch, but that Dish so far has shown no willingness to back down. That could be a portent of how the HBO negotiations will proceed in the days or weeks to come.

“It has been unafraid to have blackouts, or to eliminate channels from
their packages, if they cannot reach terms that make sense for Dish,”
he told the E-Commerce Times.

“Carriage agreements are often contentious, but we have seen an
escalation in blackout brinksmanship over the past few years,”
Sappington added. “Pay-TV providers are already facing declining
subscribership and new low-cost online alternatives, making it
difficult for them to raise prices. At the same time, networks
continue to face increased costs of their own.”

Dish has had other very high-profile carriage disputes with various
content providers. Prior to the ongoing HBO blackout, the most notable involved AMC Networks. It lasted more than half of 2012. Other
blackouts have involved MSG, Fox News Channel/Fox Business Network and
Turner networks.

In many of those past disputes, pricing was the core issue, but this
time Dish has maintained that it is about it being forced to carry a
minimum number of subscribers — in essence, subsidizing HBO for free to DirecTV customers.

“Programming contracts are complicated, and it’s common for the price
that a satellite or cable company pays to depend, to one extent or
another, on the number of subscribers,” explained Stephen Blum, principal analyst at Tellus Venture Associates.

“Without knowing the details of the contract, it’s hard to tell
whether Dish has a legitimate complaint or not,” he told the
E-Commerce Times. “That said, Dish has a history of hardball
negotiations with programmers, and has let channels go dark in the
past when they couldn’t get the deal they wanted at the time.”

In this week’s call, Dish’s Ergen underscored his earlier warning that
AT&T’s purchase of Time Warner would be anticompetitive for
consumers. A reduced number of service providers has given consumers less choice, while allowing one service provider to control some of the most desired content.

“At some point, an operator was inevitably going to have a carriage
dispute with a Warner network and blame AT&T for anticompetitive
behavior,” said Parks Associates’ Sappington.

“The fact that it was Dish, which directly competes in satellite and
online services — and so soon after the merger — paints AT&T in a
particularly unfavorable light, regardless of the validity of the
claim,” he added.

The question is whether Ergen would have had those concerns if AT&T had not insisted on requiring a minimum number of subscribers, suggesting this could be as
much theater as a valid concern.

“Dish is trying to bait AT&T into some sort of antitrust claim in
order to get better pricing and terms,” suggested Joel Espelein, president
of
Corum.

“I doubt it will work. The reality is distributors like Dish
increasingly lack any leverage in discussions with content companies
like HBO and ESPN that can just go directly to consumers,” Espelein
told the E-Commerce Times

This standoff could become the new “business as usual” between a
pay-TV service and a content provider, but in the short term, Dish’s
subscribers are the biggest losers. That could turn into a longer-term loss for Dish if those consumers decide to jump to another service — such as AT&T-owned DirecTV.

“The change won’t cripple Dish, but it will be painful in the short
term,” suggested Sappington.

However, HBO and its new parent company AT&T can’t be seen as winners
either during a blackout.

“Typically, this kind of carriage dispute gets settled,” he added.

“Not having HBO would be a problem for Dish, but losing access to Dish
households is an even bigger problem for HBO, and while ‘cripple’ is a
strong word for it, both companies would be hurt if a deal isn’t
reached,” explained Blum.

Given that there are now countless ways to get HBO — as well as other
services — the blackout could just serve to embolden more viewers to
become cord-cutters, and in this regard Dish has more at stake than
HBO/AT&T.

“Dish still needs HBO — that much is obvious, but why does HBO need
Dish? Answer — they don’t,” maintained Corum’s Espelein.

As HBO is owned by AT&T, it might soften the blow if consumers should opt
simply to cut the cord completely instead of switching providers, but it is doubtful in the long run that AT&T would want to risk hastening the decline of the traditional
pay-TV service.

“If the blackout goes on for more than a few weeks, it could have
significant consequences for HBO and Dish,” said Blum. “For now,
though, it’s business as usual.”