Home / E-Commerce, Industry News / In the Time of Virus | Business

In the Time of Virus | Business 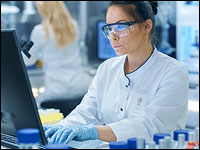 Life goes on, though I keep thinking about the coronavirus and its impact on business, which is substantial. I am wondering if it’s time to count our blessings even as we remain vigilant.

At this point the number of active cases in the U.S. is still small, relative to the population, though the bug has an annoying ability to do math in the form of exponential spread. Still, even our somewhat botched attempt at controlling it is considerably better than we were capable of a few decades ago.

Back in the 1980s I was a medical technologist working in a lab, analyzing specimens taken from patients, trying to help doctors figure out their maladies. I guess I’ve always been an analyst in one way or another.

There was a strange new and very lethal virus that we didn’t understand at the time. Later it became known as AIDS. It knocked out the immune systems of its victims and they died horrible deaths from things we thought we’d cured a long time ago, like simple bacterial pneumonia and leprosy.

It got so bad during the initial stages of the outbreak that even the blood supply was tainted by a few donations. You could go in for surgery, get a blood product transfusion, and end up with AIDS.

I was just a bench scientist not very long into my career and more observer than participant in the drama. Things looked bleak for a while but the medical establishment — and it’s funny how that word and its derivatives, like “deep state,” have become punching bags lately — we collectively rolled up our sleeves and did science.

We adopted more stringent controls in labs and blood banks, even resorting to gloves and gowns, practices that have not faded away entirely, and we rolled back the contagion.

We didn’t cure the disease and that’s instructive because much of modern medicine isn’t about finding cures. It’s more about battling a foe to a draw. By that I mean that there are lots of diseases today for which there are drugs to blunt the force of a disease and enable patients to live with a disease and avoid dying from it. Count diabetes, high blood pressure, heart disease, arthritis, kidney diseases, liver diseases, and even AIDS in that group.

What’s interesting to an old lab guy about the coronavirus is that with this virus, the means of combating it that are available to us right now involve inventions in technology we have developed over the last 25 years, many of them emanating from CRM.

Cloud technologies enable many of us to work from home and to be very productive. CRM enables a single customer service representative to access the full resources of a business from the comfort of a home office to serve customers and, importantly, to keep the economy running while maintaining social distancing.

CRM is not a panacea. Bread still has to be baked, trash picked up, and tires still have to be manufactured — but the load that modern technologies take away from the society at large have the natural consequence of putting fewer people on the street. It makes it easier to perform social distancing, thus slowing virus transmission.

Other technologies, like analytics and online trading, enable catastrophic stock market drops to happen in minutes rather than days. On the flip side, social media — which has been much maligned, and deservedly so, over the last few years — shows up as a net positive when it’s used to enable people to maintain their personal relationships, obviating the need to meet face to face.

What comes into sharp focus in all this is the reality that technology is neither a good nor a bad thing. Technology is a tool just as a hammer is. You can use a hammer to drive a nail or to hit someone over the head. Same hammer.

Right now, we’re witnessing how the confluence of a lot of later 20th century and early 21st century technology can benefit the common good. It’s highly likely that we’ll emerge from this crisis with new uses for our inventions that perhaps will spawn new industries.

As I’ve written before, look at how video conferencing took off in the wake of the recession that followed the dot-com crash.

At the moment the future doesn’t look especially rosy, and it would be incorrect to put too much faith in technology. As in the early days of the AIDS epidemic, it wasn’t the makers of electron microscopes who were the heroes. It was the tens of thousands of trained people doing their jobs who ultimately helped to turn a runaway epidemic into something contained and eventually treatable.

Today we all have an opportunity to be part of the solution by doing our jobs and relying on the foundational technologies many of us participated in building over the last two and a half decades.