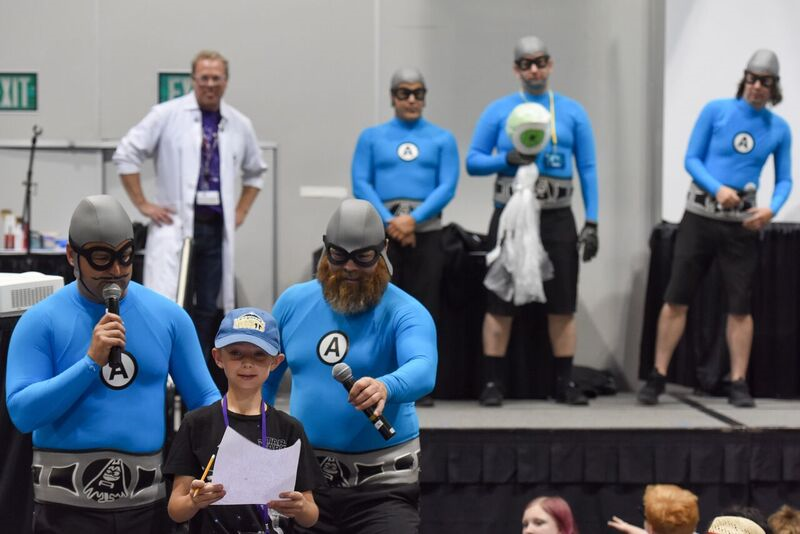 In 2010, a group of friends and comic book enthusiasts had an interesting idea – promote literacy and childhood education using comic books and pop culture. To help fund it, they’d put on a convention. What began eight years ago as Comic Book Classroom has evolved into Pop Culture Classroom and the Denver Comic Con, the third largest event of its size in the United States, attracting 115,000 people in 2018. They will be launching a second pop culture event in Reno in 2018.

“We’re all just a bunch of nerds who wanted to share our love for pop culture. We realized a convention would be a great way to share our passion and raise money to fund our nonprofit,” said Angie Morency, office manager and one of the first paid employees of the nonprofit organization. “In the second year it blew up. We had so many attendees it surprised everyone.”

The success of Denver Comic Con has allowed Pop Culture Classroom to rapidly grow operations and fund new programs to support its mission to “inspire a love of learning, increase literacy, celebrate diversity and build community through the tools of popular culture and the power of self-expression.” That mission has taken many forms over the past eight years. Pop Culture Classroom’s programs now include more than school curriculum. For example, it offers summer Art in the Park workshops like “Superhero Design” and “Cosplay 101,” a partnership with the African Community Center to provide literacy support to refugees in the Denver area and comic book creation workshops, game design and a summer reading program at YMCA’s, libraries and schools throughout Colorado including a new prison program.

The program is also finding fans across the US, with educators reaching out to the organization seeking materials. To date, Pop Culture Classroom has provided STEM-approved programming to more than 100 schools in Colorado and another 100 libraries and nonprofits.

And, as Pop Culture Classroom is bringing Comic Con to the classroom, it’s also bringing the classroom to Comic Con. Unlike similar conventions, the Denver Comic Con features 600 hours of educational programming, including a classroom area at the event. In fact, in 2017, the success of the convention allowed the organization to expand beyond its downtown office space and move into a low-income neighborhood in Denver where it operates a classroom onsite.

However, the sudden explosion of Denver Comic Con has overwhelmed the small organization, which run largely by volunteers in its early years and to date has only a staff of 11 to manage $3.2 million in revenue. By 2016, Pop Culture Classroom was still operating with an outsourced accountant using QuickBooks, which delivered little in the way of payment approvals. Additionally, complex, manual processes created bottlenecks, which was particularly difficult during the frantic times before Comic Con.

So, seeking a more robust financial system, Morency helped to bring in NetSuite to replace the QuickBooks system, with the help of a donation from Oracle NetSuite Social Impact. Now accounts receivable, accounts payable, and all transactions are held in NetSuite.

“It’s great to have everything in one place,” Morency said. “That’s the biggest thing for me. Since we have such a huge event, there’s so much money going in and out of this organization during that time. Now it’s easy to track that. If I didn’t have NetSuite, I’m not sure how we’d track any of it.”

Pop Culture Classroom was also able to take advantage of NetSuite Social Impact Suite Pro Bono Services, which connects nonprofits with a team of NetSuite employees who donate their time and expertise. They helped create a spreadsheet and mapping process to upload credit card charges.

“They literally have saved me days of manually entering our credit card data each month,” Morency said. “Especially during Con time, it would take me weeks of data entry. I would need to work overtime just so I wouldn’t get behind in my other duties. I am so grateful that I can now import the data with just a few easy clicks.”