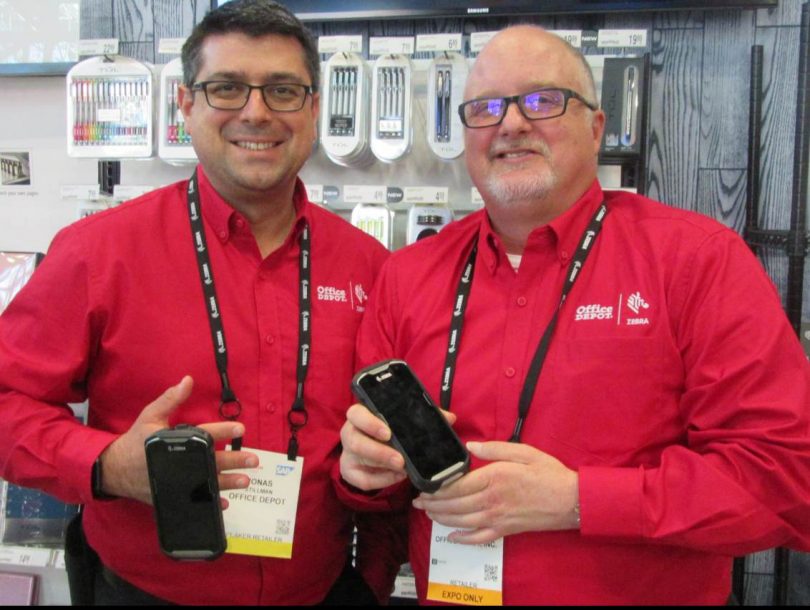 Summary:
It’s time for my annual push through the retail tech hype in search of retail success. One big story: the revenge of the storefront, but with a big caveat. In my first NRF review piece, I break out the early highlights – and an instructive mobile use case from Office Depot.

At NRF Vision 2020, aka “The Big Show,” I found retailers in a more confident mood than I’ve seen in years’ past. Why? My early take is that they see a clearer path to success amidst the Amazons and Walmarts. Storefronts are not the albatross they once appeared.

Retailers are building a case for stores as a competitive edge – albeit with potentially massive redesigns/rethinks. I called it the “revenge of the store,” but quickly changed that to “the revenge of the right kind of store” – fueled by better data on what customers need.

And: the surge in mobile commerce gives retailers one device to focus on. This makes the omni-channel “experience” a bit easier to achieve, as consumers move from home to store with phone in hand – even while “a single view of the customer” is a work in progress for most.

At my meeting with Adobe yesterday, they confirmed these trends through their extensive holiday shopping analysis. Examples:

However, Adobe also noted that retailers need to up-sell in store. They are missing an opportunity to turn BOPIS into a more than just a pick up on a shopping list. BOPIS “baskets” tend to only contain a few items, often less expensive than the norm. That’s a pretty good picture into where most retailers are now: capitalizing on storefronts but not necessarily in transformative ways. During my traditional NRF holiday stats meeting with Salesforce‘s Rob Garf, he summed up the opportunity to get ahead, or fall behind:

Less than 20 percent of retailers have BOPIS – those that do still haven’t cracked the code of the implications on the physical store.

As Garf put it, retailers can put in all the tech they want, but if that doesn’t enable either experience, automation or convenience, it’s not going to make a difference to consumers.

NRF’s “Big Show” is a bit like CES: there is always a push for next-gen tech. Robots are all over the show floor this year. But as you might expect, some of the least sexy machines are the ones getting the job done. I did a video (forthcoming) with a demo of a very unsexy looking robot from 6 River that is doing just that – having a sizeable impact on productivity for warehouse item “picking” and replenishment, already in use by major customers like DHL and Lockheed Martin.

My definition of the much-abused term “innovation” is pretty unconventional. Does it make my heart pound a little bit? Does it make a world full of adversity and have/have-not divides a little better? Is it getting real world traction – or is it just a shiny new object in deep yearning for a use case? This one made my personal cut:

My fave thing from the #NRF2020 Innovation Lab today was Infinite Acres and their indoor farming, with delicious tomatoes and cukes on hand. “Sustainable indoor farms” using 97% less water and no pesticides….https://t.co/5maBc7pfua pic.twitter.com/bs1qpim8e3

Before interviewing their customer Office Depot, @ZebraTechnology gave me the next-gen tour, I donned AR glasses to see how warehouse (and store) employees can have hands-free visibility to operations – video with some details from Zebra here https://t.co/i84OJU3y62 #NRF2020 pic.twitter.com/0oOuixN01u

Zebra also showed me a retail/inventory robot (SmartSight) that is a great deal smarter than the dumb one in my local grocery store that gets in the way while supposedly looking for spills. SmartSight can not only identify unstocked items – it also issues prioritized alerts to employees, derived by what items are important to restock quickly:

But where are customers at? What problems are they solving now? What tech are they using at enterprise scale? Zebra always has a customer presenting in their booth – this year it was Office Depot. Office Depot has been working with Zebra to capitalize on that smartphone user familiarity – but on the employee productivity side.

Office Depot has now rolled out Zebra’s industrial-grade Android devices in both their stores and supply chain operations. To tell me about the store employee rollout, I got the lowdown from Jonas Stillman, Office Depot’s Director of Store Systems (pictured left in feature image – both are holding the devices). First up: why the new devices? As Stillman told me:

We had an aging fleet of legacy devices in our stores that wasn’t really fitting our needs. After a very thorough selection process in both stores and in the supply chain, we landed on the TC 51 series devices for stores. The supply chains are using a combination of 51s and 56s – a common Android platform across both supply chain and retail.

It’s really helped us in developing applications, but also having a device that’s really designed to hold up to our environment.

Whenever someone calls a device “legacy,” I want to know why. What made it archaic?

When Stillman says “anything we could throw at it” – what is he talking about? Well, the legacy environment required communication between two devices, IoS and industrial. Now it’s a single device:

Everything’s built into it… We actually ordered them with exoskeletons just as some added protection, because we’re very concerned about device downtime in our stores.

Durability is a big factor:

The only device failures that we ever see with these devices is store associates accidentally abusing the device. You know, they run over it with a forklift or throw it in the bailer. The devices themselves are designed to handle anything we could throw at it outside of major physical abuse.

What are employees doing with the phones? Basically everything – all the operational tasks inside the stores, from inventory to pricing integrity management to planogram integrity. Office Depot built out applications to cover all these tasks. And yes – the tasks are prioritized as well. Office Depot built a list management capability into their devices, with a checklist that turns green as tasks are completed.

This is not what you’d call a pilot deployment. There are 7,500 devices rolled out across 1,300 stores. On the supply chain side, there are another 3,500 across 100 warehouses and satellite sites. Improving productivity is a good thing – but ultimately, these changes should impact customers. So have these devices helped Office Depot serve their customers better? Stillman:

A resounding yes. There’s two reasons for that. One, because the device is durable and reliable, downtime has not been an issue for us. We rolled these things out ten months ago, so we know we have the tools in the associates’ hands. The other component is: because we’ve been able to automate so much of what we used to do that was manual, we’ve been able to reallocate labor from task to the customer.

So – this wasn’t a headcount reduction plan then?

Stillman has more plans for these devices on deck – but it’s not too early to speak to results.

It doesn’t take me all day to do price audits, because that’s also part of the applications that we built. We also developed this process called Scan-Put-Away. In the old days, if a store wanted to replenish, they would scan it, and then they’d have to go search for the product.

In a high-turnover industry, training is a real challenge – and expense. But if you rely on well-designed smart phone apps, that training need is minimized:

Anything we develop for the stores has to be intuitive enough where they can pick up a device and go. We don’t have time to make training videos, we don’t have time to go through it. You shouldn’t have to in today’s age. And what we have found is you don’t need to.

Norm Parker, who manages Office Depot’s technical teams for Supply Chain & BSD, shared a similar story. Their teams are still rolling out some devices, via a rollout that will complete in June 2020.Â  One angle Parker brought out: the power of collaboration. Parker:Â

Our Workforce Connect application has helped us bring the associates together. It’s reduced cycle time and so forth. So if an employee has a question on one side of the warehouse, today, all they have to do is use the push to connect. They can go right to talk to whoever they need to, get the answer and move on.

We didn’t just stop, it’s continuous improvement all the way through. We continue to see a reduction of labor needed to do the basic stuff. Right? It doesn’t take me all day long to do an out-scanned any longer because the system is doing a lot of behind the scenes automation that we were able to build into the device.

It takes more than one piece to break out the key themes (and surprises) of NRF 2020. But I think this eminently practical use case shows how retailers are getting traction after years of omni tail-chasing. I can remember times when retailers were eager to take phones out of their employees’ hands to prevent Facebooking at work. Companies are smartening up – literally.

Put employees on more equal footing with phone-savvy customers. That’s a welcome change from “Why can’t these store associates answer my product questions?” oblivion. Or, looking for a store associate that is distracted by stocking shelves. Next up: an inside look at Target’s retail store and tech transformation – and why the two are inseparable.

Disclosure – NRF provided a press pass for my access to NRF Vision 2020. Salesforce is a diginomica premier partner.