Summary:
Starbucks has been a digital pioneer, but hasn’t forgotten that retail is ultimately about human beings – both behind the counter and in front of it. 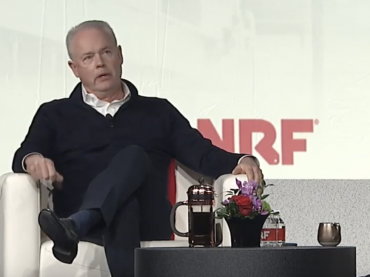 A â€œhuman-first digital strategyâ€� is the key to future retail success, according to Kevin Johnson, CEO of Starbucks, and those who fail to marry physical and digital will fall by the wayside.

Long-term diginomica readers will know that weâ€™ve closely tracked Starbucks digital transformation progress over the years and class the firm as one of the success stories in the retail sector, right up there with Target, whose CIO Mike McNamara Jon talks with elsewhere. McNamara spoke about the importance of keeping a customer-centric mindset in his role and for his part Johnson takes a similar stance, articulating the importance of the human connection in retail.

This was an idea that he seeded in an eve-of-NRF article on the Starbucks corporate website, where he is quoted as warning:

This age of unparalleled digital connection has brought with it an age of unprecedented human disconnection. While technology has done many wonderful things, itâ€™s also changed behaviors in a way where people donâ€™t interact with one another nearly as much, which is unhealthy and I think is contributing to a global epidemic of human loneliness. I believe we are just beginning to see and understand the implications.

And I realize that serving 100 million customers a week at Starbucks means we have at least that many opportunities to enhance human connections and perhaps create that sense of community and a place where people feel more connected face-to-face with other people.

Technology has done so much positive for the world, but it has contributed to some unhealthy outcomes as well. When it comes to enhancing human connection and enabling people to be present and feel a part of a community, I believe technology, if used in responsible and thoughtful ways, can also be the enabler of freeing up people to be more human and better serve humanity.

These were themes that he picked up on during his NRF keynote session entitled Elevating Human Connection. Johnson, a technology veteran with stints at IBM and Microsoft among others, is an unashamed tech enthusiast and has driven the digital agenda at Starbucks since taking over as CEO in 2017 from Howard Schultz, who must take the credit for setting the coffee firm on that digital path earlier than most retailers.

But while heâ€™s pumping investment into technology innovation, he remains mindful of the need for retailers not to forget human beings, both those who work for the firm – AKA partners in Starbucks-speak – and those who interact with it as customers. While many firms pursue the latest bright, shiny silver ball, technology for technologyâ€™s sake isnâ€™t a message that Johnson pitches:

Starbucks has pioneered – to greater or lesser success – initiatives such as Mobile Order and Pay to make customer engagement with the firm more seamless. Itâ€™s now partnering with the likes of Uber Eats and Door Dash on delivery options to bring Starbucks to the customer. And itâ€™s got an ‘open door’Â Tryer Center at its Seattle head office where all employees, from senior management to baristas, are encouraged to share ideas and experiment with new ways to improve the customer experience, but always with that human connection in mind.

Perhaps the most high profile of Starbuckâ€™s tech innovations at present is its Artificial Intelligence initiative, Deep Brew. Last year, we noted Johnsonâ€™s early mission statement for the program:

Deep Brew will increasingly power our personalization engine, optimize store labor allocations, and drive inventory management in our stores. We plan to leverage Deep Brew in ways that free up our partners, so that they can spend more time connecting with customers. Deep Brew is a key differentiator for the future. And as we continue our quest to build world-class AI capabilities, to better support partners.

Flash forward a few months and thereâ€™s an extra shot of detail in the form of user-centered exemplars of how Deep Brew tech works on the front line as Johnson explained:

In many ways, Deep Brew and the focus on machine learning and Artificial intelligence is all about finding ways to help humans have more time to be human. It’s not about robots replacing baristas. It’s about technology that frees up our baristas to better connect with one another and connect with customers. So Deep Brew will do the calculations and find out what inventory to order for a store. That frees up some hours of time that partners have to spend calculating inventory and placing an order. Deep Brew will predict how many baristas we need on staff every 30 minutes of the day so that we are staffed in a way that we can serve customers and meet customer demand. That dramatically simplifies scheduling of our partners.

Thatâ€™s useful clearly, but only the start of what Johnson envisages:

Weâ€™re working now on some advanced projects with Deep Brew. For example, if a customer comes up to our point-of-sale to place an order and theyâ€™re placing their order, right now the barista is heads down and typing in that order. Weâ€™re doing some research that says, what if that barista had a microphone with some AI Deep Brew natural language behind it and theyâ€™re having a conversation with the customer. In the process of that conversation, [the customer] would like a Chai Latte and a croissant. It is then parsing that order and [the barista] is not having to enter it.

Neuroscience will tell you that that eye contact and conversation is a much better connection with another human being than sitting there typing on a point-of-sale. So we’re trying to invest in those things that we know can enable our Starbucks partners to spend more time connecting with one another and connecting with customers. It is about optimizing so that we can put our partners in the best possible position to support one another as they serve our customers.

That is all an appropriate extension of Starbucks long-standing vision of being a â€˜Third Placeâ€™ in local communities – home, work and Starbucks. COO Roz Brewer defined the concept and Starbucks idea of its role a couple of years back:

Over the past five years the Third Place has been extended, extended digitally, and we are innovating in ways to better serve experiences around both community and convenience.

In practice, the key to this Third Place idea is the local bricks-and-mortar store. The physical realm needs to synch seamlessly with the digital one, argues Johnson, and striking that omni-channel balance is crucial:

A decade from now, those that win and succeed in retail are going to have both a brick-and-mortar presence and digital relationships. And it’s going to be the ones that do that in a unique way through the brand and bring value to your customers as well as those that do it in a way that goes beyond the state of convenience. If it’s just a place to pick something up or just another node in the supply chain, it is not going to be the kind of destination that customers seek out.

As to what the future holds for Starbucks, which next year will celebrate its 50th anniversary, Johnson concluded by stating that there are couple of imperatives that will steer the firm:

To have the wisdom to know what to honor and preserve from the past: the mission, the values and the importance of human connection. And we have to boldly dream about the future.

As noted above, Starbucks is up there with Target as an omni-channel retail exemplar of best practice. Johnson has picked up the baton from Schultz, who first recognised the digital disruption that was to come, and run with it. While every retailer worth its salt has the inevitable buzzword-compatible AI initiative in the works, Deep Brew looks to be capable of delivering genuine benefits to the business while operating alongside some sound corporate values that ought to put paid to the inevitable robot barista headlines that accompanied early media coverage.