Summary:
A devastating warehouse fire hurt Ocado earlier this year, but also pointed to the resiliency of the business model. 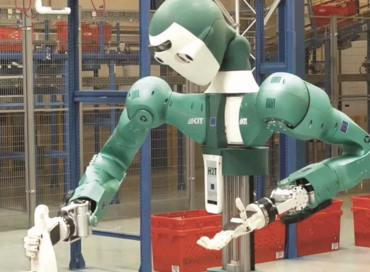 Looking at US supermarket group Krogerâ€™s omni-channel transformation ambitions yesterday, the companyâ€™s partnership with online grocery platform provider Ocado was cited as a major plank of this.

Appropriately enough, this morning saw Ocado CEO Tim Steiner providing a half year update on the company, six months that have seen strong sales growth, some interesting innovations and investments and a devastating warehouse facility fire that hurt the bottom line, but also provided evidence of the resiliency of the firm as it mitigated the damage down to its operating capabilities.

Itâ€™s amazing how resilient we have been.

That said, the actual financials donâ€™t make for pretty reading. While retail revenues were up 9.7% for the 26 weeks to 2 June, coming in at Â£803.2 million, the pre-tax losses were Â£142.8 million, against Â£13.6 million this time last year. But leaving aside the impact of the fire – Â£98.5 million after insurer claims were received and another Â£15 million to come for the rest of the year – there was a very positive doubling of fees invoiced from international grocery partners, such as Kroger, to hit Â£46.7 million.

In fact after many years of waiting and wondering when Ocado would be able to sell its Smart Platform tech to third parties, there are signs of life. Steiner pointed out that existing partners represent a bricks-and-mortar annualised run rate of Â£195 billion:

The global opportunity is huge, he added, citing a Â£7.6 trillion global grocery market and Â£2.8 trillion in the key markets identified by Ocado:

If a quarter of that went online, youâ€™d see a Â£0.7 trillion online market. Thatâ€™s before we innovate further towards lights out and human-less deliveries, all things we are working on.

More partners and more facilities means an increased level of investment. An increased level of investment enhancing the quality of the platform which creates faster growth for partners that are on the platform which leads to more investment, but also makes it more attractive to more partners, also leading to more investment. It really is a virtuous cycle as the scale increases the rationale and resources to invest for further innovation.

To fuel all this, Ocado is transforming itself, said Steiner:

We are scaling the business to be capable of growing not in terms of one or two warehouses a year but in 10, 20, 30 warehouses a year. We keep challenging ourselves to see how fast we can grow. Weâ€™re changing processes so that we can undertake multiple programs at the same time and in multiple countries.

In execution terms itâ€™s not about adding complexity, itâ€™s about adding velocity. The more we do, the more simple this is getting. Weâ€™re less likely to see new challenges as weâ€™re more likely to have seen that challenge before. One of the ones weâ€™re dealing with at the moment is seismic risk.

With this weekâ€™s earthquakes in California, thatâ€™s timely. But all of this of course is another scoop of the â€˜jam tomorrowâ€™ messaging that Ocado became too associated with. On a more grounded level, Steiner can point to some significant developments, not the least of which is the joint venture with Marks & Spencer, the long-awaited strategy to get the latter to take its head out of the online groceriesÂ sand.

Steiner pitched this as creating a joint business that is â€œtech-enabled, asset light and mission-focused:â€� with concrete plans to build a fifth warehouse facility in 2021 and seven more over the next 12 years:

The objective is to create a business that is better for ocado.com customers. To leverage the strengths of Ocado Retail with M&S who have 12 million food shoppers. Think of that relative to our 300,000 or so orders a week or our 700,000 active customers on a rolling basis. Twelve million food shoppers a week go into M&S stores. This has significant ability to drive traffic to ocado.com.Â Together with M&S we intend to grow faster than we would have done as a standalone business.

Another notable success has been the initial – very, very limited – trials of Ocado Zoom, an â€œimmediacy deliveryâ€� offering as Steiner referred to it. The idea is built around having smaller distribution facilities servicing a local area with a limited amount of inventory – 10,000 items at pilot launch – and delivered within an hour of placing an order.

This is still very much in beta test mode, emphasised Steiner, lamenting that he doesnâ€™t actually live in the trial catchment area in London so hasnâ€™t been able to use the service himself. But the results coming back in from early users are very encouraging, he said:

We are 95% on time within our one hour from order to delivery. Our average is around half an hour. And we have an incredible 0.2% substitutions.

One significant finding so far is that users of Ocado Zoom are not cannibalising from their existing primary shop with Ocado per se. According to Steiner, the anecdotal evidence is that customers are driven by different motivators:

Two-thirds of the baskets are what weâ€™d call a â€˜small shopâ€™, not an emergency top-up. A small shop is between Â£20 and Â£55. The average basket has turned out to be 30% larger than our pre-launch expectations. It is we believe the best â€˜immediacy serviceâ€™ for the customer.

But if like Steiner youâ€™re outside the trial area, donâ€™t get too excited anytime soon. While there is currently a search for a second pilot location in London, it could be as much as two years before the facilities and software is up to muster for a wider rollout in the UK, let alone be sold to international partners.

But longer term plays is a concept hardwired into Ocadoâ€™s DNA, although Steiner emphasises both the knock-on effect of learning to overcome challenges more quickly as more facilities are rolled-out. Thereâ€™s also an eye to new vertical opportunities outside of the core groceries market. Steiner cited Mayâ€™s Â£4.5 million minority stake in Karakuri,Â  – a robotic meal preparation business that could have significant applicability inside the roboticÂ  distribution centers.

He also pointed to two other investments in the vertical farming industry – a Â£17 million majority stake in Jones Food and a JV with Infinite Acres:

There are parallels to our online grocery business – Jones being the farmer like ocado.com being the retailers and Infinite Acres being the supplier as Ocado Solutions and the OSP is to the global grocery industryâ€¦.We filed first vertical farming tech patents back in 2015 so we have been working on it for a while, just not talking about it.

The financial report wasnâ€™t what investors needed to hear, but the firmâ€™s share price rose on the results, indicating that the â€˜long gameâ€™ messaging is maintaining confidence. The fire was an unavoidable factor, but one whose disruptive impact was at least contained and minimised. I suspect the M&S tie-up news more than balanced out any anxiety among shareholders. The ability to scale is crucial here and Steiner lacked no ambition on that front. If his â€œvirtuous cycleâ€� theory stands up, thereâ€™s a lot of work to be done, but a lot of reward to be won.