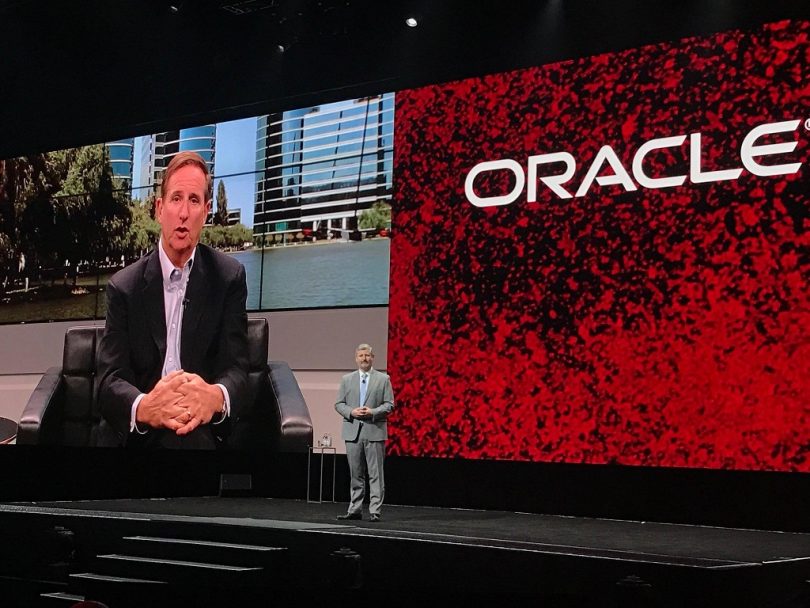 SuiteWorld18 featured a number of incredible business leaders, including fashion entrepreneur Rachel Zoe, basketball legend and investor Magic Johnson, and inspiring founders like Kara Goldin the CEO of Hint. From motivating keynotes to educational breakouts, attendees came to Las Vegas this past April to learn how they can harness the power of digital technologies to break through the old constraints and grow both their ideas and their business. The first-day keynote event was capped by Oracle CEO Mark Hurd, who appeared live via satellite.

During his appearance, Hurd participated in a wide-ranging question-and-answer session with attendees. His responses touched on subjects ranging from essential (Oracle’s integration of NetSuite) to esoteric (one attendee asked Hurd if he’d rather invest in quantum computing or reverse aging technology). NetSuite customers will appreciate much of what he discussed, and some of Hurd’s statements are worth a closer look.

Oracle and NetSuite: A Perfect Pairing?

During his conversation with Oracle NetSuite Executive Vice President Jim McGeever, Hurd stated that Oracle’s acquisition of NetSuite has “gone exactly as we would want.”

Hurd indicated that Oracle will continue to accelerate investment in NetSuite. Oracle and NetSuite have a longstanding, close relationship, as NetSuite was founded by former Oracle executives, with early funding from Oracle founder Larry Ellison, and built on Oracle technology. NetSuite is rapidly expanding its data center footprint by leveraging the latest Oracle innovations with Oracle Cloud Infrastructure (OCI). By using OCI, NetSuite will be able to leverage the 11 global datacenters that utilize the OCI infrastructure. OCI is specifically architected to provide the consistently fast performance, versatility and governance required to run the most demanding workloads for Oracle’s largest customers. This will give NetSuite access to thousands of OCI developers and operations personnel to further improve efficiency, reliability and security.

In fact, Hurd stated that NetSuite would be the beneficiary of research and development (R&D) funding going forward, and he also promised that NetSuite would benefit from Oracle’s global reach as it continues its international brand expansion. In addition to its substantial R&D outlays, Oracle also maintains a far-flung network of global offices. There are 26 Oracle national contacts for the Americas, 35 contacts for different European nations, 24 points of contact for African nations, 12 for the Middle East, and 24 for the Asia-Pacific region.

As a Cloud company, NetSuite is a natural fit with Oracle’s growing cloud business. Hurd said that Oracle and NetSuite are “trying to create this world where, from the smallest company to the biggest companies, you now get access to the same technologies.”

Hurd also repeated his mantra on the three-fold benefits of cloud computing: “It simply costs less… you simply get more innovation… and it’s simply more secure.” These three core cloud computing benefits have been key to Hurd’s public presentations on the technology and he supported these statements at SuiteWorld18 with specific examples.

For the first benefit, Hurd noted that the costs of data center operations and organizational R&D can be shifted to massive companies like Oracle, which can devote more resources to maintaining and improving hardware and software than nearly any other non-tech company — as well as most tech companies, which lack Oracle’s size and reach. This “offloading” benefit ties into Hurd’s second point, as companies that use Oracle’s cloud solutions can benefit from the aforementioned R&D spending without having to devote significant resources to developing or improving their own systems. The benefits of cloud computing for growing businesses is also a popular subject on Hurd’s Twitter feed.

While he highlighted all three benefits during his initial speaking session, much of Hurd’s time at SuiteWorld18, particularly during the question-and-answer session, was devoted to Oracle and NetSuite’s cloud-based security advantages.

With regards to security, Hurd noted that data protection concerns have prompted Oracle to open data centers in many additional countries. Hurd also pointed out that Oracle and NetSuite encrypt data in transit throughout their cloud services.

Oracle CEO Mark Hurd regularly speaks on technology industry topics and was a featured speaker at the Oracle OpenWorld 2017 conference. You can watch many of his major speeches on Hurd’s official YouTube channel.