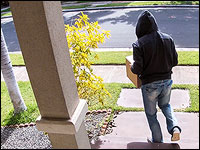 Porch pirates were busier than ever in 2020, according to an annual survey by a market research firm.

C+R Research, based in Chicago, found 43 percent of Americans said they had a package stolen in 2020, a seven point increase over 2019, when 36 percent revealed they’d been theft victims.

In addition to those among the 2,000 consumers surveyed by C+R who had packages stolen, those who knew someone who had a package pilfered also increased during the period from 56 to 61 percent, and those who knew a neighbor targeted by bandits also climbed, from 31 to 43 percent.

The report also revealed that 47 percent of those surveyed filed police reports about their theft.

Although 81 percent of those surveyed noted they’d received a refund for their stolen items, nearly a third of them (32 percent) complained that delivery companies weren’t doing enough to prevent package theft.

Concern over package theft seems to be a boon for makers of security gadgets. The researchers found that 50 percent of the survey sample said they’d purchased a doorbell camera or other type of security device to prevent package theft.

A contributing factor to the rise in package theft could be that delivery volumes are increasing. According to the survey, 10 percent of participants said they have packages delivered daily, up from five percent in 2019, and 49 percent get a delivery at least once a week, up from 44 percent in 2019.

“Package theft is a problem for online retailers that seems to be getting worse each year,” observed C+R spokesperson Matt Zajechowski.

“I think there is a direct correlation with package theft numbers increasing as more and more consumers move towards the convenience of online shopping,” he told the E-Commerce Times.

“Considering the continued growth of e-commerce spending along with many Americans staying home and shopping online due to the COVID-19 pandemic,” he added, “it is not a surprise that more consumers are receiving more packages and also dealing with more package theft incidents.” 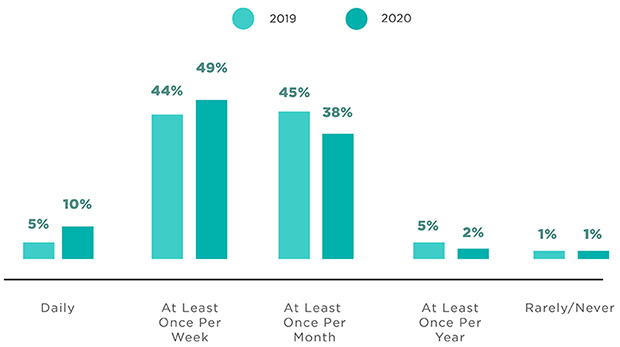 Part of the problem is finding a secure place to leave packages, particularly in densely populated areas, said Rob Enderle, president and principal analyst at the
Enderle Group, an advisory services firm in Bend, Ore.

“Drone delivery will address part of the problem for some areas,” he told the E-Commerce Times. “You can do a better job with a drone of scheduling a delivery when someone is around.”

“Now you don’t know when a delivery driver is around,” he explained. “Even if you’re home, you might not know that they dropped a package off.”

“Package theft is happening enough that’s it’s causing some concerns about buying online and being able to enjoy what you bought,” he added.

Pirates of the Pandemic

Anxiety about enjoying an online purchase can be particularly high once a consumer has been targeted by porch pirates.

“The likelihood of a victim of package theft being victimized more than once is high,” Zajechowski said.

“Our data found that of those who reported having a package stolen this year, 64 percent say they’ve been a victim of package theft more than once,” he noted.

“I think porch pirates who get away with the crime are more than likely to return to locations they know frequently receive package deliveries,” he explained. “It’s not hard for someone to drive through a neighborhood and find the houses that have packages sitting outside on a regular basis.”

The C+R researchers also found that the COVID-19 pandemic appears to have had an impact on package theft. Of the 43 percent of Americans who had a package stolen in 2020, 29 percent reported having it nicked during the pandemic.

What’s more 22 percent were first time victims during the pandemic, while an additional 45 percent said they knew someone who had a package stolen during the COVID-19 outbreak.

The pandemic has absolutely had an impact on package theft, asserted Katherine R. Hutt, chief communications officer for the International Association of Better Business Bureaus.

“More people are shopping online so more packages are being delivered,” she told the E-Commerce Times. “Also, more people are out of work and property crime increases when unemployment goes up.”

Enderle reasoned that the pandemic has both decreased and increased package theft.

“More people are home to receive the package when it arrives,” he said. “But there are a lot of people out of work so there’s a crime problem exacerbating the delivery issue. People are stealing stuff and selling it on eBay.”

Retailers can do a number of things to lower the risk of packages being stolen, noted Sucharita Kodali, an analyst with Forrester Research.

They can send customers email alerts that inform them a package has arrived, she said. They can require a signature for a package, although that can add to the cost of the delivery. They can also redirect a delivery to an alternate address.

“But often the solution is for carriers to leave packages in non-obtrusive places,” she told the E-Commerce Times.

Amazon experimented with having its drivers delivering packages into the homes of its customers. 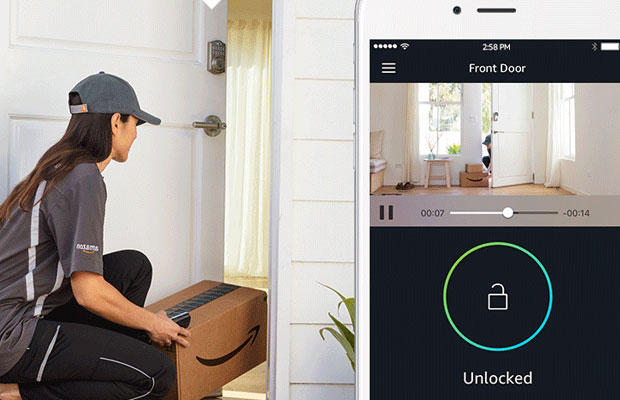 “A delivery [person] would open your door and put a package inside your house,” Enderle explained, “but that made a lot of people nervous. They didn’t want a stranger in their house when they’re not at home.”

The company’s most recent delivery scheme involves a kit that a homeowner can install on a garage door that allows delivery persons to open it and leave packages in the garage.

“There have also been some efforts to have people buy secure boxes they could put in front of their home for packages, but that didn’t scale well,” Enderle noted.

The C+R survey identified a number of ways consumers are coping with porch pirates.

“First and foremost, stay home or schedule deliveries for when you will be home, if possible,” Zajechowski said. “We found that 64 percent of Americans say this is the top precaution they have taken to prevent package thefts this year.”

“If a retailer has the option for in-store pick up as opposed to delivery, I would recommend doing it if you are concerned about package theft,” he continued.