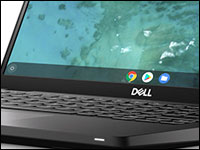 A new collaborative effort between Dell Technologies and Google has produced the world’s first enterprise-class Chromebook.

The companies on Monday announced their partnership to bring new capabilities and services to Dell’s
Unified Workspace strategy.

Google launched its Chrome Enterprise capabilities in 2017 to put critical enterprise features like advanced security protections and fleet management in the hands of businesses deploying Chromebooks.

Dell’s Unified Workspace brings together enterprise-class hardware, management, service and insight-powered support with new capabilities for multi-OS environments, all available as a service.

The new Latitude Chromebooks make it possible for business users to deploy Chrome devices to their global workforce with the level of security and manageability expected in a corporate environment, according to Dell.

Both Latitude-class Chromebooks are entirely suitable for enterprises and other businesses, said Charles King, principal analyst at Pund-IT.

“Dell’s new Latitude Chromebooks highlight the continuing move away from homogeneous personal computing that has been going on since BYOD programs were announced a decade ago,” he told the E-Commerce Times.

Those “bring your own device” efforts highlighted the need for organizations to support the endpoints their employees preferred, King pointed out.

This new generation of enterprise-focused Dell Latitude Chromebooks likely will continue and accelerate that business class evolution, he added.

The Dell and Google partnership on developing Latitude Chromebooks for enterprise resulted from growing market interest for Chrome OS devises, a Dell spokesperson said in comments provided to the E-Commerce Times by company rep Margaux Vega.

“We are seeing market interest for Chrome OS devices, and our customers are asking for a Chrome OS enterprise option. They need Chromebooks that are powerful, reliable, manageable and available globally,” the spokesperson said.

The Latitude Chromebook Enterprise meets those needs. IT decision-makers face huge demands with small budgets. They need heterogeneous solutions that easily integrate into existing user environment management (UEM) systems and that give workers choice when it comes to their OS, according to Dell.

Dell has made numerous forays into the enterprise offering Linux computers for business use. Dell’s new Chromebook strategy is part of that evolutionary marketing process.

Dell’s goal is to offer choice. Many enterprises have heterogeneous environments or are quickly moving in that direction. That is one of the key reasons Dell offers Unified Workspace, the spokesperson said. The partnership with Google gives Dell’s customers the option to use its trusted Latitude enterprise-grade PC with the OS of their choice — whether that’s the Chrome or Windows OS.

Dell’s new Chromebook Enterprise devices include the choice of 8th Gen Intel Core i5 or i7 processors to boost employee productivity. They are the only 13- and 14-inch Chrome Enterprise devices in their class with mobile broadband capability to give employees fast and seamless access to the cloud.

Dell based that assessment on Chromebook devices equipped with Intel Core i7 8665U processor, integrated UHD 620 graphics, 32 GB of DDR4 2400-MHz memory capacity and 256GB PCIe NVMe SSD providing up to 1 TB of storage. They also offer LTE options and USB Type-C docking.

Those new devices include all-day battery life and a fast battery charge with ExpressCharge technologies. These are the only 13-inch and 14-inch Chromebooks with WWAN up to 450 MB/s with CAT 9 for connectivity on the go and a full range of ports.

They also support a broad range of accessories, including a Chrome-specific external keyboard, Dell Premium Active Pen and USB Type-C docking, so they can be integrated into a desktop work environment with up to two monitors.

The Latitude Chromebooks cost less than similar Windows configurations. Plus, Dell promises the value of an enterprise device with global scale and availability, manageability and serviceability.

Chromebook Enterprise is a game-changer for businesses looking for a modern OS that provides end-users with speed and productivity, noted John Solomon, vice president of Chrome OS at Google.

The new devices offer IT the comprehensive security it needs. Dell Technologies’ deep understanding of end-user and IT needs is a natural fit to bring powerful devices with the benefits of Chrome Enterprise to businesses worldwide, he said.

The new Dell Enterprise Chromebooks are configurable with 10 localized language keyboards. The Dell Latitude Chromebook Enterprise is available in 50 countries, offering the widest global availability of any Chrome Enterprise device in its class.

Enterprises can deploy the same system consistently to offer a secure, manageable and reliable experience to their workforce. IT administrators easily can select and purchase various Latitude Chromebook Enterprise configurations to meet user needs, Solomon said.

Dell Technologies also will be a reseller of G Suite, and Drive Enterprise — which includes Google Docs, Sheets and Slides — so teams can store, share and access files of any kind securely, either offline or online. Cloud-first tools can make it easy for teams to work together and get things done fast.

Dell’s new enterprise-class Chromebooks could undo several barriers that kept earlier models from being suitable for enterprise use. Google clearly wants to capture some of the enterprise OS markets, according to Arle Lommel, senior analyst at
CSA Research.

“Chromebooks in the past have had reputational problems that have made this difficult. Customers have seen the offerings on the market as underpowered, low-end devices suitable for consumers with low-end needs,” he told the E-Commerce Times.

Google’s offerings have shown real improvement, but it has remained challenging to move Chromebooks into the enterprise laptop space, where Windows has remained dominant, Lommel added.

One challenge is that many enterprises will continue to rely on Windows-only offerings for at least some of their daily operations. Until Chromebooks can serve as drop-in replacements for Windows machines, enterprises will continue to see them as limited-use tools suitable for telecommuters and staff who do not need “real” applications, he suggested.

“Whether or not this is fair, the perception has been that ChromeBooks are really netbooks and suitable for students and home users, despite the OS’ Linux underpinnings,” said Lommel.

Along with being designed by Dell’s business-focused Latitude group, the new notebook and 2-in-1 are available with configuration options for processors and up to 32 GB of DDR4 memory and up to 1 TB SSD storage. Plus, businesses can select three- and four-cell battery options with fast charging capabilities and connectivity options, along with optional mobile broadband, he pointed out.

“Chromebooks are a solid option for businesses that want the benefits of integrated, cloud-based productivity applications and workplace at a low cost and with less complexity than Microsoft Office and other solutions,” King suggested.

Google has overcome earlier hardware shortfalls that kept Chromebooks out of enterprise consideration, he said. Over time, Google has made the investments needed to make Gmail, Hangouts and G-Suite productivity applications suitable for the vast majority of business and employee requirements.

For many organizations, adopting Chromebooks over Wintel PCs will involve the same challenges and headaches as any IT migration, King acknowledged. That said, those impediments are not inhibiting Chromebook adoption by large, name-brand enterprises.

Verizon migrated 150,000 users to G-Suite, and Colgate Palmolive has deployed 28,000 G-Suite seats. Plus, Netflix and Starbucks have adopted Chromebooks, and Salesforce purchased 10,000 business class Chromebooks and signed a strategic integration pact with Google, according to King.

How suitable these Chromebooks might be as enterprise-grade devices really depends on what the enterprises are doing, Lommel noted.

They will meet the requirements for a lot of business users, but for those involved in engineering and development tasks, however, these enterprise-class Chromebooks may not be ideal.

“It boils down to convenience and cost. Chromebooks offload much of the computationally intensive work to remote servers, which can be optimized to run their tasks,” explained Lommel.

This provides scalability and speed that can be attractive, as long as business requirements do not stray beyond what they can provide, he said. As long as you do not need the local power of a dedicated Windows laptop, they can be quite attractive.

“And let’s face it. Most staff really have vanilla needs,” said Lommel.

Lack of access to the Windows ecosystem could be a deal-breaker for many enterprise users, noted Lommel. Also, for staff who need to travel and are at the mercy of hotel WiFi networks, a Chromebook may not be the best option.

Those who frequently travel abroad will want to weigh these factors carefully. An enterprise-grade Chromebook can become an expensive paperweight if you travel to a location where Internet access is poor or local restrictions keep you from using particular services.

“These are issues that corporate IT needs to evaluate carefully,” Lommel cautioned.

However, the ongoing shift to cloud-based apps puts some enterprises at the point where abandoning traditional Windows-based architectures is possible, he noted.

“Increasingly we are in a world in which the local laptop can be essentially a dumb terminal to a powerful network,” he said. “However, it is not as if Microsoft is standing still. For almost any cloud-based application, a Windows laptop provides an equally good access point, and users retain the flexibility they need.”

The contest between a Windows laptop and a Chromebook may come down to enterprises taking the less-costly path, Lommel concluded.

“If enterprises are happy with Google’s ecosystem,” he said, “the lower total cost of ownership that comes with not needing to license desktop software could provide a real advantage.”