Sainsbury’s till-free retreat is a timely reminder to retailers that digital transformation goes at the customers pace
Stuart Lauchlan
Wed, 09/11/2019 – 03:39 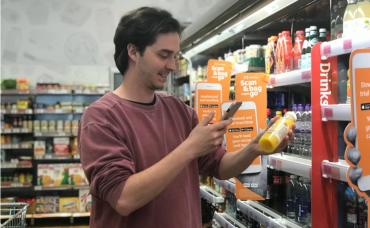 Sainsburyâ€™s boast of being the first UK supermarket to offer in-app mobile payments to shoppers has come back to haunt the firm as its pilot in a checkout-free London trial has singularly failed, with potential learnings for other â€˜tech-hungryâ€™ retailers.

Back in April, Sainsburyâ€™s announced a three month initiative to allow customers at its Holborn Circus convenience store to scan and pay for groceries using the retailerâ€™s SmartShop Scan, Pay & Go smartphone app. Customers would pay via the app and scan a QR code before leaving the store.Â  Or that was the theory.

The appeal of the app-based approach to till-free checkout for Sainsburyâ€™s is that it offers a much lower cost of infrastructure investment than the sort of sensor and camera-centric model in use by Amazon in its Amazon Go stores.

We know our customers value their time and many want to shop as quickly as possible – technology is key to that.Â

And a month into the trial, CEO Mike Coupe was already claiming:

Itâ€™s interesting to see already that the adoption rates are pretty high. It again shows how the world of payments will adapt in our supermarket and convenience business.

Flash forward to this month and the Holborn Circus outlet has seen two self-scan tills and a checkout with a human being behind itÂ reinstalled after negative feedback from consumers to the new digital tech. Complaints included problems in scanning the QR codes on items and difficultyÂ logging into in-store wi-fi resulting in customers having to use up mobile data allowances.

The result was that shoppers ended up going to the in-store help desk which had human beings in situ and checking-out there, with long lines building up which defeated the entire â€˜shopper in a hurryâ€™ thesis underpinning the trial.

To be fair, Moriarty did add an important proviso at the time of the launch when she said:

This is an experiment rather than a new format for us – it hasnâ€™t been done in the UK before and weâ€™re really excited to understand how our customers respond to the app experience.

The firm now has a clearer idea and the conclusion is:

Itâ€™s clear that not all our customers are ready for a totally till-free store.

In a blogpost, the firm argues that it has learned from the trial:

Developing and testing new technology is key to making sure weâ€™re bringing our customers the very best shopping experience. Our SmartShop app â€“ where customers can scan and pay with their phone with no need to queue or pay at a till â€“ was already live in eight convenience stores. An experiment, rather than a new format for us, we wanted to put the technology to the test in a till-free environment to understand how our customers respond to the experience.

The experiment created excitement amongst customers, with many keen to check out the store, download the app and test out this way of shopping. Lots of customers loved how quick and simple the SmartShop app is to use and many are choosing to shop this way regularly.

Weâ€™ve listened closely to feedback, learning and adapting the experience along the way. For example, some customers found the QR codes when leaving the store could have been easier to scan, so we designed new ones and adjusted how they were placed in store. While most customers are happy to use their mobile data to download our app and shop, many signing up to use the store Wi-Fi found the journey took a little long, so we changed it to a one-step process.

Some customers preferred to pay with cash and card, which sometimes meant they were queuing to use the helpdesk, particularly at peak times of day. This is why weâ€™ve added a manned till and two self-checkouts back into the store so those looking to pay by cash and card can do so quickly and conveniently. We want to be the most inclusive retailer where people love to work and shop, so itâ€™s really important to us that our customers can pay how they want to.

Till-free shopping is still on offer in the Holborn Circus store, as well as eight other convenience stores across London. Sainsburyâ€™s next step is go back to the drawing board and see what needs to be done to make the digital solution viable for widespread roll-out.

The main learning here for all omni-channelÂ retailers is that just because there is a bleeding-edge technology solution on offer, that doesnâ€™t mean that consumers are going to be ready to go along with what your strategists have decided is to be the new world order.Â  Earlier this month we noted that the so-called Gen Z digital native shoppers are inclined to want to go into stores despite being told by myriad retail management consultants that they only want to transact via mobile device.

Shoppers, even the digital natives,Â can be remarkably conservative. My own local Sainsburyâ€™s has just installed self-check out and reduced the number of people on tills to a bare minimum. This caused sufficient protest to make the front page of the local newspaper with lots of complaints from customers.

I canâ€™t say I blame them. Iâ€™ve yet to find a single supermarket where the self-scan checkout technology works well enough for it not to be a hugely irritating experience. Weâ€™ve all been there. â€œUnexpected item in bagging area!â€� Itâ€™s the shopping, itâ€™s always the shopping – whatâ€™s the point of having tech in a shop that doesnâ€™t recognise shopping?

The end result is the supermarket having to employ people to hover by the self checkout in order to assist – or to add to the bad customer experience. My personal favorite was being told by one such supermarket staffer that I needed to stop opening my bag to put the shopping in as it was confusing the computer! My response is best not recorded.

Itâ€™s not their fault of course, but they might as well be sitting behind the till as they are in, for example, discount retailerÂ Aldi. And given that the likes of Aldi are retail success stories while such as Sainsburyâ€™s are struggling, thereâ€™s maybe a lesson to be taken there. The lines in Aldi may beÂ long, but the checkout process is prompt and considerably less frustrating than wrestling with technology that demands human intervention every couple of minutes.

None of this will stop the relentless advance towards till-free checkout, of course. Amazonâ€™s doing it, so everyone else is going to chase the shiny silver ball, not pausing long enough to notice that Amazon itself is adapting its model to roll out â€œadditional payment mechanismsâ€� – AKA cash – in its Go stores as legislators in major cities contemplate banning cashless stores as discriminatory to those without bank accounts or smartphones.

Footnote – I was encouraged to note that evenÂ  the most digitally-savvy tech industry leaders appear to share my pain: 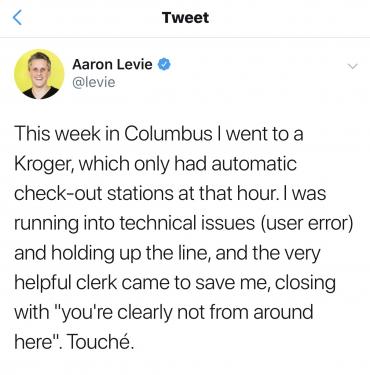