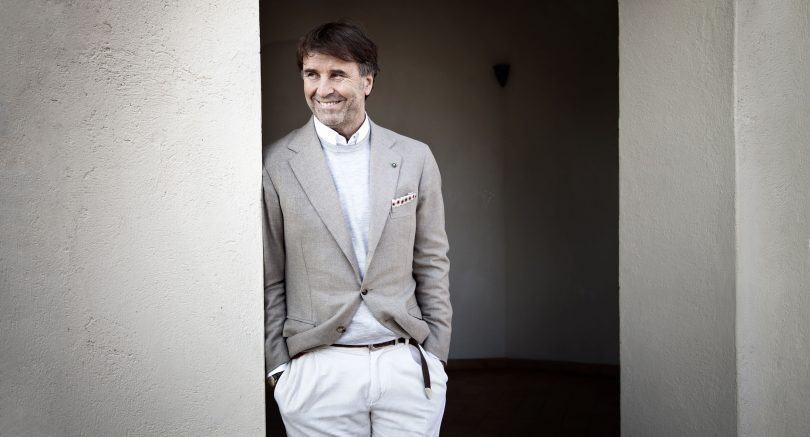 Summary:
Luxury Italian fashion brand Brunello Cucinelli knows that things will change because of COVID-19 – but this doesn’t mean ‘everything digital’.

Brunello Cucinelli – founder of the self-named luxury Italian fashion brand – had a very humble upbringing, his family coming from a 15th century little hamlet near Perugia. His ideas of business were formed as a child, where he saw his father working in what he calls an “unwelcoming environment”.

Cucinelli’s entire career, since he first began dying cashmere back in 1978, has been about promoting an idea of work that ensures “moral and economic dignity”.

He has spoken openly about this idea of ‘humanistic capitalism’, which centres around the idea of business not just being about wealth generation, but also enhancing the human being. Cucinelli has strong views on supporting ideals, such as beauty, craftsmanship and protecting the earth.

Why is all this important? Well, it plays directly into the company’s digital strategy and focus, with Brunello Cucinelli (the organisation) deliberately not throwing digital tools at every situation because it can. Instead, the idea of warm experiences and customer wants and needs are brought to the fore.

Brunello Cucinelli iCEO, Francesco Bottigliero, was speaking this week as part of the Salesforce Live EMEA customer event, where he said that even with the COVID-19 health pandemic changing the shape of business and retail – the luxury fashion brand still doesn’t believe digital is everything. He said:

I’m the digital guy, so I should say that I only see e-commerce in the future. But in the end, I don’t think in this way. Fashion is something that is always going to be appreciated when you can touch it, when you can touch the fabric, you can understand how a suit is fitting you. We do think digital will play an important role, but it will never become the predominant channel. So we think our boutiques will always have an important role.

They will in the future, for sure, see less people visiting them, but fashion has to be appreciated mainly in person. And of course we can be very effective in selling online, but in the end we want our customers to feel the atmosphere of our boutiques. We want them to smell the atmosphere, to see the lights, to touch our cashmere. But of course we have to rebalance the two different experiences.

The role of the iCEO

The job role ‘iCEO’ isn’t one that you see too often. But again, according to Bottigliero, Brunello Cucinelli thought the title is fitting within the context of the company’s values and how it likes to approach change. He said:

I know that it’s not so common. This was the idea of our chairman. When he was looking for someone that would lead the digital transformation of the company, he said I want someone at the CEO level. So we added the ‘i’, which stands for innovation, for the Internet. He always says to me that you are the iCEO of the company, but please remember that I’m your super-iCEO. And by this he means he wants to underline the fact that we should work together in order to keep developing our company in a contemporary way, but not giving up the key values that have led this company for 40 years.

So, how does Brunello Cucinelli as a company approach the adoption of technology? According to Bottigliero the key is to make technology as invisible as possible to its customers, so that they can continue to ‘feel’ and have that luxury fashion experience. He said:

We like the idea of making our technology become invisible. We don’t want to exaggerate pulling out technology in front of our customers. There was a time during which many fashion brands adopted, for example, digital signage into boutiques, or the use of iPads to ‘enrich the relationship with customers’. We said no, because although we want to adopt the best technologies out there, we don’t want to make the warm experience between our sales associates and our customers too cool because of technology. That’s why we like the idea of having invisible technologies around us.

Bottigliero said that the company believes in what it calls ‘unified commerce’, where customers should always be approached in a very consistent way across different channels. Brunello Cucinelli had already adopted Mulesoft before it was acquired by Salesforce a couple of years ago, and was using the technology as its enterprise service bus (ESB) – which Bottigliero believes could be very valuable as it assesses new technology deployments in the fallout from the COVID-19 pandemic. He said:

I think what we are seeing now is that we need to develop some decent selling tools for our boutiques, new payment mediums etc. The entire pandemic has sped up the adoption and development of this kind of cross-channel/omni-channel solution. One key important aspect is also that stock will have to be optimised even more than before.

The [Mulesoft ESB] is really helping us because the most important data we have in our company, as well as the most important tools that we can use for that unified commerce vision, we can now make them available through the use of this ESB through different channels. It was a good choice even before, but now that we are in a completely different situation, where we have to develop very, very rapidly the digital tools that will be used by our boutiques, the ESB is very, very fruitful.

Buy the best…if it aligns with our values

Bottigliero isn’t ignorant about the changes hitting the retail market – in all sections of it. However, he explained that Brunello Cucinelli is never going to be a company that doesn’t place its customers or its values front and centre of any purchasing decision the brand makes. He finished by saying:

Now we are seeing very big changes in the market, of course. We think this is going to create a more sober atmosphere in the future. And this means that for sure if we have data or information about our customers, if we are going to use this for some marketing profiling or other commercial purposes, that should be very well explained to our customers. And should never interfere with their privacy.

There is going to be a shuffle in priorities of mankind, there will be things that go up, and others that will go down. And we have to respect this and understand that the business we were in before is changing and it’s very unlikely that it will go back to how it was before.

Disclosure – Salesforce is a diginomica premier partner at time of writing.