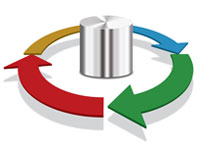 Drop Tank is a small company in footprint — it started with only 22 people — but it has an outsized mission: to provide loyalty and discount programs to thousands of gasoline retailers.

It has been decades since gas stations offered incentives to purchase their products. Last time, in the 1960s, retailers routinely would offer silverware, glassware and china with fill-ups. Alternatively, some would offer Green Stamps — collectible coupons redeemable for merchandise. That was the state of the art for loyalty programs.

All of these arrangements were relatively easy to administer, and there was no back-end data to massage. A customer made a purchase and got a reward on the spot. Those were the days! Today’s loyalty programs often capture metadata from the transaction that credits points to a customer’s account and the customer can determine how best to spend them.

Drop Tank started out providing single-use, cents per gallon discount cards to customers in 2012. Today it offers the same fuel discounting scheme, along with gift cards. It also has combo offers for deals on gasoline and consumer packaged goods sold in convenience stores that sell gas.

Drop Tank began designing a back-office system in 2016 for the purpose of riding herd on customer gas purchases and the points they accumulated. Any customer could join by adding a phone number, which then could be used at the pump to identify the purchaser. The system has been through several iterations in its short life, each time becoming simpler and more efficient, and thus better able to support an expanding mission.

When Drop Tank started out, it produced a small black box device that connected to the pumps, capturing customer data and purchases for later upload and processing. The device was needed, because 65 percent of retailers were independent and had the ability to choose their POS (point of sale) system.

That resulted in integration challenges best met by hardware. Less than 10 years later, the black box is gone. The latest iteration leverages the Oracle Autonomous Database, which enables several important improvements for Drop Tank and its customers.

Drop Tank’s principal partner is Marathon Oil, a vertically integrated petroleum company that leads in oil refining in the U.S. and runs a large distribution network located primarily in the Eastern half of the country — though recent acquisitions have spread its footprint into the West.

Although the original black box solution was good for its time, installing those boxes at more than 3,500 retail locations was time-consuming and expensive, requiring a visit to each retailer.

Tim Miller, vice president of technology for Drop Tank, is a cofounder of the company. He has run its IT department from the beginning, so it has been his responsibility to develop, deploy and maintain each iteration of the system — that’s all the incentive he’d need to support continuous improvement.

Over time, Miller has been able to replace the black boxes with server-side software for all of the POS systems popular with his customers, the retailers. Importantly, the evolution of technology in the dealer network mimicked and supported the evolution of increasingly sophisticated services provided by Drop Tank to the retailer, and recently to configure, price, quote companies.

Drop Tank discovered that it could collect data that CPG vendors needed, and also provide more information to a growing set of CPG vendors. However, the company needed a data warehouse that could handle the load while enabling it to maintain its small size as a 22-person business. Finding the right amount of automation was critical. That’s when it turned to Oracle.

While Drop Tank captures a great deal of data in its data warehouse, there are times when CPG companies might want specialized information that’s not easily available as the system was set up.

It’s a common problem. For years, data warehouse users have tried to build a perfect warehouse containing every kind of data and every possible analysis — but that’s not real. So, Miller took the company in a different direction. Today he says, “Don’t try to build a data warehouse that’s perfect; instead, leverage the power of the autonomous database,” which he does.

When a CPG customer makes a special request, Miller says that thanks to the Oracle Autonomous Data Warehouse, Drop Tank simply can spin up a new database automatically in about an hour, without the traditional overhead of building, tuning and maintaining it.

“Spinning up a traditional database and tuning it can take days or weeks. Within an hour I can have the database running. Within four hours, we can load data, and then within another hour we can have answers. That’s a difference maker.”

That’s far from instantaneous, but compared to the weeks that a conventional database requires to do the same thing, it is a difference maker.

Oracle technology has enabled Drop Tank to grow in several ways. Oracle Platform as a Service and Infrastructure as a Service have enabled the company to run its IT in the cloud using a service-oriented architecture (SOA) that helps it reduce overhead and save headcount.

The Oracle Autonomous Database enabled the company to branch into providing information services to CPG companies from its starting point as a loyalty program provider. Further, Oracle automation has enabled this small company to remain small in headcount, but to continue to grow its services while significantly increasing productivity.