Home / Retail Omni-Channel / Still a case of Bed, Bath and Beyond hope as the retailer's new CEO aims for omni-channel catch-up?

Still a case of Bed, Bath and Beyond hope as the retailer's new CEO aims for omni-channel catch-up? 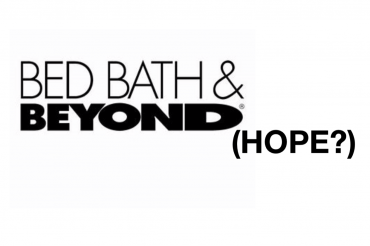 As 2019 came to a close, our review of the year picked out Bed, Bath & Beyond as one of the yearâ€™s retail basket cases. It looked pretty much a case of â€˜Bed, Bath and Beyond hopeâ€™ as far as pulling off a much-needed omni-channel transformation was concerned.

Inevitably thatâ€™s not the view of CEO Mark Tritton, 66 days in from picking up the poisoned chalice and vowing to achieve what his predecessor failed to deliver – a 21st century retail experience, online and offline. Trittonâ€™s a veteran of Target, the retail omni-channel transformation exemplar, where he was Chief Merchandising Officer. His experience is going to be critical in 2020 and heâ€™s keen to flag it up:

One of the advantages in my more than 30 years of experience in different retail environments is seeing other cultures, different structures and different models during turnaround situations and growth recovery.

In other words, heâ€™s staking a claim to being someone who knows what heâ€™s doing – and to be fair to him, heâ€™s not exactly been idle in his first couple of months, for better or worse.

Most notably heâ€™s ousted six members of the senior management team he inherited, including the Chief Digital Officer. That leaves him working with a lot of caretaker execs for now and some crucial roles that need to be filled pretty damn quickly. Keep calm, is Trittonâ€™s message:

We will be putting a team in place that will not only have the right talent and expertise to execute our new vision and inject new ideas, but also the right organizational structure to facilitate more streamlined decision making to accelerate the pace of transformation and to re-establish Bed Bath & Beyond’s authority in the home spaceâ€¦I have been active in the recruitment process for these roles already. Volume of inbound interest has been extremely high, and I’m confident that we will recruit top talent for these positions.

Heâ€™s also set out to monetize the companyâ€™s real estate via a $250 million sale/leaseback transaction, which gives him some cash to play with when it comes to investing in his planned turnaround. Thatâ€™s handy to have – for the first three quarters of the current fiscal year, CapEx spend has run at $188 million. Nearly half of that went on tech and digital projects – and thereâ€™s going to be more of that coming up as he cites the need to address:

the reality that the next generation of customers is not just digitally savvy, but shop digital first.

In his first days in the CEO role, Tritton says heâ€™s spent some time trying to understand the Bed, Bath & Beyond customer demographic and he argues that the majority of people who do engage with the retailer and purchase goods have a favourable impression of the brand. But thereâ€™s a but:

The data also speaks to our challenges, including a lack of clarity around purpose and value and a softer connection with Gen-Z and Millennial customers in our product categories. In addition, we know in our industry that 80% of traffic is influenced by digital touch points, reinforcing that our digital business is a gateway to our customer and that we need to drastically improve our digital platform.

A lot of the current problems and shortcomings are self-inflicted he admits withÂ  all the comfortable candor of a new CEO still in the honeymoon period of being able to call out the old regime. But he clearly has a point – in 2020, Bed, Bath & Beyond is a retailer that doesnâ€™t offer Buy Online, Pick-up In Store (BOPIS).

What Bed, Bath & Beyond does have is ROPIS – Reserve Online, Buy In Store, but thatâ€™s not enough, concedes Tritton:

[It] is still creating friction for the guests to have to go through the actual purchase of store. We’re going to move to frictionless purchasing in early 2020.

So BOPIS is a priority for the first half of this year, he says. For now though, its absence is a useful exemplar for how much basic catch-up is needed just to retain credibility, let alone deliver on what Tritton calls:

a clear mandate to re-establish our authority as the preferred omni-channel home destination.

Ignoring the immediately raised eyebrow at the â€˜re-establishâ€™ part of that claim – when was it established in the first place? – the question remains how Tritton intends to execute on his supposed mandate. It will be an omni-channel approach, he insists:

We’re looking at the total marketplace, and really trying to understand the customer, how the customer has learned new ways of shopping, and new ways of interacting, and really looking all those best practices across the board. And then the key elements of those are really around a digital-first strategy and what we call an omni-always, and really thinking about digital as a gateway experience.

A key tenet of Trittonâ€™s thinking seems to be that digital channels are an area that can be optimized very quickly, an assumption that might be more credible if he hadnâ€™t removed the Chief Digital Officer perhaps? But he argues:

This is one of the areas we can be the most agile because of the rapid change and the cost associated. Everything from the speed and accuracy that the customer can move through our website compared to our competition is being reviewed; – how we tell stories to our customer and involve them for consideration as well as purchase;Â  thinking about digital being a trojan horse for the total experience and a true digital touch point as opposed to a new independent silo. So enterprise thinking really here, as digital gateway. Everything from how we feature on a website, how we represent value, how we celebrate key moments and missions and occasions for our customer, as well as the key brands and categories they want to look at is really up for grabs.

Weâ€™ve started that work and we’ve got support in analyzing that and looking at considerations like speed, agility, and how we profile brands, price points, and storytelling and key promotions. So, all of that is being looked at and we’re deepening that at the moment. We hope to get some traction on that very quickly in half one, and be established and ready for that all important second half.

There have been some interesting digital developments in the time heâ€™s been on board, he says:

We’ve seen some great statistics that saw our mobile conversion outpaced our desktop conversion for the very first time. And that’s the app playing a great role and we think that it can be even more prevalent in the way that we interact with a customer. We see that even convenience is a very important part of our business. And I think that the last 12 months to 2 years has really seen a renaissance in the interconnection between digital and physical

But that renaissance has been driven by others, not by Bed, Bath & Beyond and what Tritton is talking about isnâ€™t innovation, itâ€™s catch-up with the competition. The CEO says he is highly conscious of rivals and peers:

We have big eyes and ears in really looking at competition and seeing how they’re succeeding, but also how they’re influencing future guest behavior and we’re looking to more quickly come on-board with that. We know that we have been behind in that. That’s everything from assortment, pricing, how we represent online and in-store, how we make it easier for customers to shop, all these are highly â€˜emulatableâ€™.

But he insists that the Tritton era Bed, Bath & Beyond will be its own creature:

We also want to make sure that during that process, we’re creating a unique and differentiated model from other retailers. So implement, yes; copying, no. We have a great opportunity, being a single authority in the home space, to create a really unique 360 degree omni-always environment.

Fine words, grand ambition, appalling third quarter numbers. Yes, itâ€™s early days for Tritton and heâ€™s got a massive uphill task to pull off, but when the company has to pull further guidance for the rest of the year, itâ€™s hardly going to fill anyone with confidence. Everything the new CEO is talking about is catch-up for survival, not about investing for next gen retail. Of course, he can only play the cards heâ€™s been dealt and itâ€™s a lousy hand, so catch-up is a necessary first step. That said, Iâ€™ll be filing away the â€˜Bed, Bath and Beyond hopeâ€™ phrase. I have a feeling itâ€™s going to be needed again.