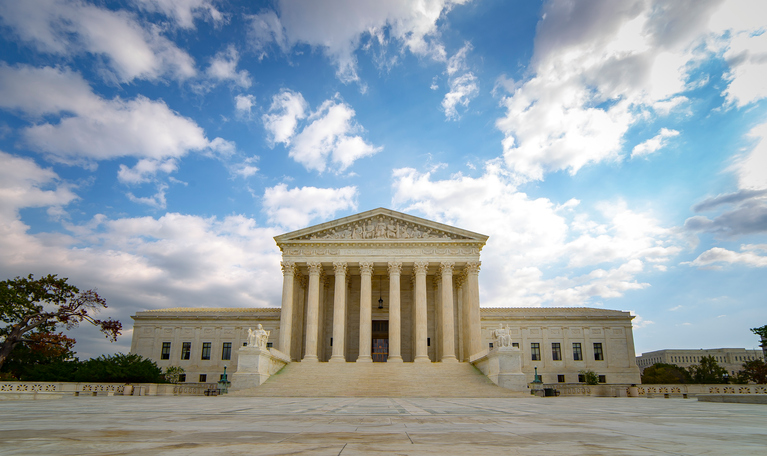 The federal government took a major step toward regulating ecommerce on Thursday when the Supreme Court upheld a South Dakota law that allows the state to gather sales tax from online businesses with at least $100,000 in sales from state residents or 200 transactions in the state annually. This overturned a ruling from 1992, Quill Corp. v. North Dakota, that prevented states from collecting taxes from companies without a physical presence in their state.

The 5-4 decision is meant to level the playing field between online sellers and traditional brick-and-mortar retailers. In the coming months and years, states will change their laws on ecommerce taxes based on this decision. Ecommerce sales added up to $450 billion in 2017, 13 percent of all retail sales.

Forty-five states have some kind of sales tax and online sales represent billions of dollars-worth of taxes every year, per NPR. Some states already have workaround laws in place to collect sales tax online, but experts predict they will scrap those in favor of legislation modeled after South Dakota.

Additionally, certain large online retailers already collect sales tax. Amazon charges taxes on all direct sales but not those from third-party businesses who sell through its site. Wayfair, one of three companies who challenged the initial South Dakota law, collects tax on about 80 percent of orders, according to The Hill.

However, this opens Pandoraâ€™s box for many smaller ecommerce companies that sell nationally but do not impose taxes. This provided certain online retailers with a competitive advantage â€“ not only might it attract more customers to shop on the site, but the company did not need to worry about calculating or paying taxes on out-of-state orders.

Chief Justice John Roberts was not in favor of the ruling and expressed concern that the decision will slow the growth of ecommerce.

â€œEcommerce has grown into a significant and vibrant part of our national economy against the backdrop of established rules, including the physical-presence rule,â€� Roberts wrote in the dissenting opinion. â€œAny alteration to those rules with the potential to disrupt the development of such a critical segment of the economy should be undertaken by Congress.â€�

Even before this decision, small businesses face a complex web of tax laws.

The President of the National Retail Federation, Matthew Shay, called for lawmakers to draw up universal rules that can be applied to all states and will minimize complications. While this would be ideal for retailers, it may not be realistic.

â€œCongress must now follow the Courtâ€™s lead and pass legislation implementing uniform national rules that provide consistency and clarity for retailers across the country,â€� Shay told The Hill.

This ruling will make robust commerce technology and tax compliance software a necessity for even small online sellers. They need a scalable way to automate taxes that may vary based on where a customer resides and a way to repay that money to the state. Technology providers will need to move quickly as ecommerce tax laws spring up.

Companies using a cloud system for financials and ecommerce are well-positioned for this change because as the vendor modifies the platform to address these challenges, updates are automatically pushed out to all customers.

A business platform that unifies commerce and financials is especially advantageous because it can calculate, capture and report on taxes across channels. The system automates tax-related tasks on all sales, whether an in-store purchase or online orders from customers spread across states, so staff doesnâ€™t waste time dealing with such headaches.

Time will tell how this Supreme Court ruling impacts online retailers and how quickly, but change is brewing. What is clear is businesses with a unified platform that can painlessly manage sales tax will be better prepared for the change and continue to power the remarkable rise of ecommerce.

To learn more about the latest trends and news in ecommerce,Â check out this recapÂ from the 2018 Internet Retail Conference and Exhibition.