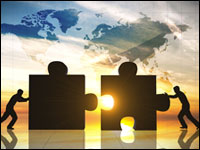 The T-Mobile-Sprint merger looked like it was pretty much a done deal a couple of weeks ago, when the Department of Justice gave its approval. However, it now looks like there won’t be a final answer until 2020. This will go down in history as one of the longest corporate merger attempts.

The delay will be hardest on Sprint and Dish Network. Even though T-Mobile looks stronger, it needs the deal too, as it transitions into 5G.

The good news for T-Mobile is that a recent earnings report shows continuing growth — but that also means regulators may not see this merger as necessary. However, as strong as the company is today, it simply does not have what it needs to succeed in a 5G world. T-Mobile desperately needs more wireless spectrum — something it can get through a merger with Sprint.

Sprint’s latest earnings show a company that is weaker than ever. It needs the merger with T-Mobile for survival. So the delay has cast a dire shadow over its future prospects. Sprint has plenty of spectrum, but it lacks the marketing magic to be successful in wireless.

Sprint needs to be rescued, and quickly. If T-Mobile can’t do it, perhaps a cable television company — Comcast, Charter or Altice — could acquire Sprint and then be able to offer wireless services on a network it owned.

One way or another, Dish Network needs to move into wireless. One, offering wireless service could help slow its pay-TV customer losses. It might use the service the way Comcast uses Xfinity Mobile or Charter uses Spectrum Mobile. Two, if it doesn’t act, it risks losing the mobile spectrum it acquired years ago. Then Dish would be in even bigger trouble.

I have many questions with regard to Dish Network and wireless. One is whether it will enter wireless as a real competitor or just create a more valuable asset to sell.

Another is, if it moves into wireless, will it be an offensive or a defensive competitor? Will it be aggressive like AT&T Mobility, Verizon Wireless, T-Mobile and Sprint, or passive like Xfinity Mobile, Spectrum Mobile and Altice Mobile?

Perhaps Dish has something else in mind. Maybe it will create a wireless provider for the cable television industry to use. That could make sense if Sprint’s assets are up to the task.

Then again, Xfinity Mobile and Spectrum Mobile already resell Verizon Wireless, a much larger and stronger competitor. Why would they consider a lesser provider? Altice Mobile will resell Sprint. So, as unlikely as this sounds, it remains a possibility.

New Questions About the Deal

There are many new questions surrounding this merger now that Dish is in the mix. That may be one of the reasons it is dragging on without an answer.

This merger may be on again, off again because the forces pushing back are not giving up. While I still like the idea, the water is getting muddy again. Now we have to wait until next year for the conclusion of this merger attempt, one way or the other.

Who knows whether this deal will finally be approved? While I hope so — for the sake of T-Mobile, Sprint and Dish Network — it simply is not a sure thing. What roles will Comcast Xfinity Mobile, Charter Spectrum Mobile and Altice Mobile play? Who knows at this stage? Stay tuned.