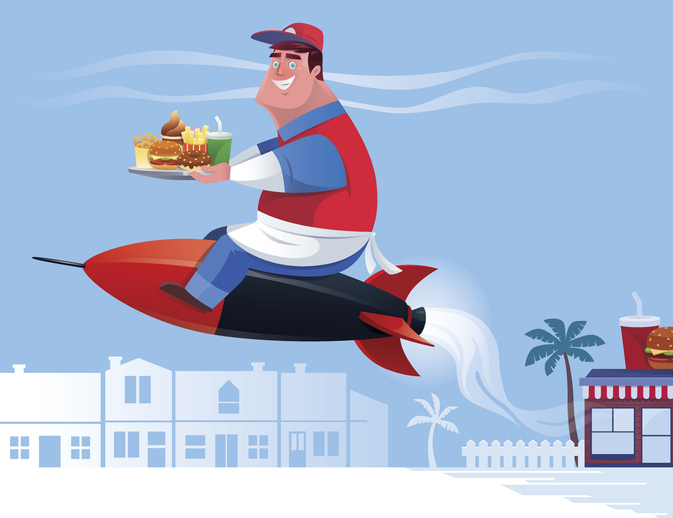 From bean burritos, to French toast, to detox juice, Grubhubâ€™s annual survey of trends in ordering pushes into focus just how much the options have increased for those hankering for delivery over the years.

Consumers now eat 80% of their meals at home, up from 75% a decade ago, according to coverage in the Wall Street Journal of research from market research firm NPD Group. By most accounts, the proliferation in those options and the increasing proclivity to have something like a peanut butter acai bowl delivered to oneâ€™s home is strongly related to the explosive growth in third-party delivery services like Grubhub.

In fact, sales totaled 9.8 billion last year for the five largest delivery providers, an increase of 55% over the previous year, according to coverage in Restaurant Business of Technomic data. Technomic is a Chicago-based restaurant management consulting firm. That makes Caviar, DoorDash, Postmates, Uber Eats and Grubhub the third- or fourth-largest restaurant chain in the U.S, according to the coverage.

As the market for delivery grows, restaurateurs for whom the business model makes sense (in that Grubhub survey, 40 percent of customers ordered most from fast casual restaurants, followed by quick service and casual dining) — are really no longer chewing on whether to deliver their fares, but how.

Should you snub GrubHub?

Recently, Jimmy Johnsâ€™ CEO announced that the nearly 40-year-old sub chain would neverÂ use a third party provider to deliver its famously fresh, fast-delivered subs â€“ which are available in zones that lend themselves to delivery within five minutes. It backed up its decision with statistics by Service Management Group as well as a study it commissioned with Boston Consulting Group. Some 92% of customers expected their food deliveries within 15 to 30 minutes of placing an order, and the largest delivery services averaged 49-minute delivery times, according to coverage in Fast Casual.

Reasons for not using third-party delivery services also often reference the cost of the service to restaurants â€“ which include fees to pick up and deliver the order from the restaurant that can range from 10% to 35% for every single order, according to coverage in Restaurant Business.

Or let third-party deliver in?

But the move by Jimmy Johns is one that bucks much of the industry. Chipotle launched delivery with DoorDash last year. Taco Bell recently announced it would partner with Grubhub to deliver orders of at least $12 (excluding tax) for free, according to Fast Casual.

Now at $13 billion, the third-party food delivery market is projected to grow at a 13.5% annual rate, according to a recently published report from Pentallect Inc., a food industry strategy firm. The market, which includes firms providing restaurant meals and groceries, is expected to reach $24.5 billion by 2022. Thatâ€™s as the $1.6 trillion U.S. food industry grows at 3% per year, according to the research.

“By most measures, the business is in its infancy. Current providers and new entrants are dramatically enhancing their capabilities, improving their overall value, and becoming increasingly attractive to consumers,” Barry Friends of Pentallect said in a press release. “We will most certainly see a marked shift away from brick-and-mortar in the food industry, and that will present challenges to many traditional restaurants and food stores.”

Itâ€™s a quandary that the CEO of Darden Restaurants Inc. â€“ parent company to brands like Olive Garden and LongHorn Steakhouse — perhaps frames best in explaining his approach to testing third-party services to deliver its menu items.

â€œHow do we ensure that these delivery services will enhance our brands?â€� Gene Lee is quoted as saying in Nationâ€™s Restaurant News. â€œCan it be flawlessly executed for our guests and our team members? Can we create a sustainable incremental growth at scale that’s additive to our company? Can we agree on viable economics?â€�

Finding that balance will be key. As evidenced by the dramatic decline of avocado toast in this yearâ€™s Grubhub rankings, tastes may change, and people will continue to argue about what to order (nearly three quarters of respondents surveyed said they’ve argued with their significant other about it over the last year). But consumers agree on the reasons why they want to order in; they donâ€™t feel like cooking, they want to satisfy a craving or just donâ€™t feel like cleaning up.