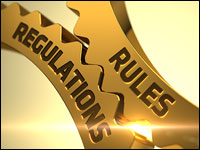 It’s about time — or better said, it’s timely. The Justice Department earlier this week announced it was opening antitrust investigations into some of the biggest tech companies around, including Facebook, Google, Amazon and others. This is nothing that either the public or the companies involved should fret about.

For a long time, I’ve been writing that this was a necessary step and that it is part of the evolution of the tech sector. Furthermore, we’ve been through this kind of thing before. In fact, each economic era, which I researched and wrote about in a book, follows a similar trajectory. A disruptive technical innovation arises, many companies quickly emerge to take advantage of it, and a long process of dispersing the innovation throughout society takes place.

That last bit about diffusion happens at the same time as winnowing — as in all the companies don’t survive, most are bought, merge, or go out of business. It’s that part that drives formation of oligopolies or a monopoly (the simplest form of oligopoly). The tech sector is quickly becoming the preserve of a few oligopolistic vendors and thus the DoJ is, in my opinion, right to pursue this action.

We’re at that point when the oligopolies are so recognizable that they have acronymic memes that are not at all complimentary — like FAANG (Facebook, Amazon, Apple, Netflix, Google). Monopoly or oligopoly status is reached when a service becomes so necessary to the public and the economy that depriving anyone or charging disproportionately inflicts harm, so antitrust actions arise.

Historically, oligopolies don’t get wiped out — they become regulated in one of several ways. In one of the most obvious outcomes, they become utilities. This is often good for the economy; for example, utilities are regulated to prevent the former oligopolies from price gouging.

Around the turn of the 20th century, J.D. Rockefeller’s Standard Oil company had such a tight grip on the petroleum market, setting prices even for its competitors, that the government required the company be split into seven parts, the Seven Sisters.

Such breakups often stimulate the marketplace and foster innovation while lowering consumer prices.

When AT&T was broken up in a 1984 consent decree, it ended a century of monopolistic phone service. Suddenly people could purchase (not simply rent) phones, and a whole host of new services and devices quickly evolved, like voicemail. Wireless devices and long-distance competition quickly followed and costs to consumers fell.

We’re living at the tail end of the Age of Information and Telecommunication, as I wrote in a recent book. When the era started, there were thousands of companies competing in computer chips, hardware, storage, operating systems, databases, compilers and applications.

Gradually that consolidated to the point that only a small number of players dominate most categories today. Cloud computing has taken that situation a step further by commoditizing even the basic idea of owning and operating IT. Cloud computing is both the ultimate commoditization of IT and the beginning of the IT utility.

Today the tech sector is maturing rapidly, and consumers need protection from monopolistic vendors of what have become essential services. That’s where antitrust efforts come in, but it’s early days. There are great differences between Facebook and Netflix, and one can be excused for not seeing a similar economic threat that each would pose if left unchecked.

Additionally, vendors like Facebook and the cable companies exist on the wrong side of the common carrier concept, an antitrust idea that you can’t own all of the means of production and set prices and have a healthy market.

A common carrier must take on all customers asking for service because the service has become so integral to the economy that preventing some people from access causes economic harm. A cable company that both provides content and the infrastructure for delivery is in a position to throttle its content competitors.

This also applies to Facebook, whose decisions about safeguarding user data fell to secondary status in the pursuit of pure profits for advertising on its infrastructure.

It’s likely that at least some parts of IT, and tech in general, will consolidate into utilities. We’re already seeing early examples beyond generic cloud computing.

For instance, Oracle and Microsoft last month entered into a relationship that enables interoperability between Microsoft Azure and Oracle Cloud. This easily could be the start of IT as a multivendor utility and resembles the situation with electric utilities.

We don’t have a national electric grid — which might be a good thing as grids are being challenged by hostile foreign powers. The electric utility is an assortment of vendors in various parts of the market and geographies that adhere to a common set of standards, thus producing the semblance of a grid. Is this a model for the future IT utility?

Other tech vendors might have better cases but maybe not. Consider Amazon, which rapidly is becoming the go-to vendor for many consumers. Does any one of us want only a single choice for so many things? As I wrote recently, I’ve been doing book signings in actual bookstores recently, and I was shocked at what I’d been missing through buying online.

Those of us who remember the earliest days of the tech era are slowly coming to the realization that our market has matured and we’re on the cusp of consolidation and utility formation. We need not mourn this transition. Antitrust actions are designed to keep mature markets mature and functioning as essential parts of society for a very long time.

Moreover, as with the telephone example, antitrust actions can spawn huge bursts of creativity, innovation and business expansion.

It’s worth noting that before the 1984 consent decree, the industry was known for “POTS,” or “plain old telephone service.” Afterward it became the telecommunications industry, marrying computing, networking, telephone and a lot more. Antitrust? Bring it.