Trailblazing a Path for Blockchain | Vendors 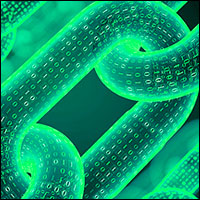 The early news out of this week’s Salesforce TrailheaDX conference at San Francisco’s Moscone Center has focused on blockchain.

Many of us think of blockchain as the technology that prevents counterfeiting digital currencies like bitcoin. However, the so-called cryptocurrencies have hit the rocks recently, losing value or at least fluctuating wildly, making them look more like the stocks of startups than stores of value.

Still, as an independent technology that can ensure the veracity of long transactional handoffs between business partners, the value of blockchain is only growing.

Multiple vendors in the CRM market have been investing in blockchain. Salesforce revealed its work at TrailheaDX and put a marker down, working with customers like Arizona State University and announcing plans to deliver blockchain support in 2020.

Salesforce used technology from Hyperledger Sawtooth and customized it to serve its customers and platform. Working with a small group of customers like ASU to define the offering, Salesforce has taken some important steps toward demystifying blockchain.

For instance, the company introduced a Builder tool that focuses on building blockchain apps with clicks and low code rather than long-form programming.

Making blockchain easy has been one of the motivating factors of Salesforce’s development project, and it makes sense. The first phase of any technology deployment is just getting a minimally viable product (MVP) out the door.

After that the effort turns to features, functions and, especially, ease of use. For most software companies the first era of blockchain largely was contained by cryptocurrency, so to reach the broadest audience now, Salesforce and other vendors have been focusing on ease of use.

This likely means that unlike other product introductions, the first experience many people will have with blockchain will not be challenging.

Additionally, Salesforce has taken steps to ensure that its blockchain product is well integrated with the rest of the platform, so that users can envision blockchain apps for myriad business processes and workflows.

When the solution set is fully articulated, look for it to enable users in multiple industries to develop apps for new needs that are only hazily in view today.

The proof-of-concept apps Salesforce pointed to — such as managing collation of college transcripts from a variety of sources, or managing approvals in financing for new accounts — seem rather superficial. That’s mostly because more intricate use cases have not evolved yet. It’s a chicken-and-egg situation, and use cases probably will lag until there’s good product available.

Salesforce also announced that it has open sourced Lightning Web Components, its JavaScript framework for developers using the Lightning Platform. This will enable developers to work on the Salesforce Platform or any other stack as well.

With it we’ve seen tremendous success for spreading the benefits of technology to the point that today it is ubiquitous and serves an array of needs that could not be envisioned back in the mainframe era.

Four years ago, Salesforce began diversifying its show schedule with TrailheaDX, enabling it to reach tens of thousands of customers it would not have reached otherwise. Moreover, Trailhead customers are developers — one of the most important constituencies because they build apps and therefore create demand for seats.

The Trailhead effort has been strategic for Salesforce, helping enterprises and small and mid-sized businesses to better manage their implementations and to develop new apps from scratch that look and behave like Salesforce, thus delivering consistent user experiences.

During that time, Salesforce also has dedicated significant effort to supporting women in technology. A big part of Trailhead’s agenda is to empower administrators, a job that includes many women.

From their ranks a significant number of developers and architects have emerged, further breaking down career barriers for people who want to be developers.

There’s talk about creating nearly a million new Salesforce jobs in the next few years and of Salesforce’s influence on GDP worldwide. All of this comes back to producing people who have the knowledge to build and run Salesforce solutions. When you look at it that way, TrailheaDX might be one of the company’s most important annual events.