Training your dog with Blue-9 is a SuiteSuccess 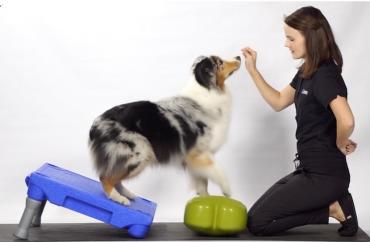 For those of us who are dog lovers, Blue-9’s story will be interesting, especially if, like me, you have an unruly mongrel that refuses to take direction unless there’s a clear opportunity for reward. For those in the enterprise crowd, Blue-9 is a good example of how fast-movingÂ businesses quickly move from one business system to another and how that can be achieved without the pain associated with large scale change.Â

Remember those days when you visited the circus? Remember how animal trainers always seemed to have complete mastery over their charges? There’s a reason for that. According to the company, animals respond better to instruction and training when they have a physical platform of their own. It was this insight that inspired David Blake, founder & president of Blue-9 to develop the KLIMB, which, according to the company is

The world’s first professionally designed and engineered dog training platform. It was specifically designed to improve the relationship between you and your dog. A dog trained through praise and rewards learns that The KLIMBâ„¢ is “his place” on which good things happen. Your dog will develop a strong association with The KLIMBâ„¢, and when on it, improved focus on you while ignoring distractions.

If that sounds hyperbolic consider what Blake has to say:

When I first heard this idea it was the craziest thing I’d heard but there was nothing like it in the market. After investing 18 months in researching and developing the product, going through the patent process.Â Since launch in 2014, Blue-9 has grown consistently 100-200% year over year. We’re now investing in automated machinery to help with demand.Â

Right place at the right time? Perhaps but that was only the start. Today, Blue-9 offers a range of accessories and harnesses that complement KLIMB. Equally interesting has been the firm’s technology journey.Â

Like many others, the first 2-18 months saw the company using a combination of WordPress, Woo Commerce, Excel spreadsheetsÂ and other tools to create an e-commerce presence. But as they quickly discovered and as Blue-9’s needs changed, achieving a stable WordPress environment proved extremely difficult. The firm switched to SAP Anywhere which offered an integrated solution worked well for a period untilÂ SAP took the decision to sunset the solution in MarchÂ 2018.Â

Like many firms faced with this situation, this put Blue-9 into the market for fresh software.

Using a product that is being sunsetted put Blue-9 under pressure to both select a fresh solution and implement. Having had experience of similar situations in the past, Blake imposed an aggressive go-live deadline of 90 days from the date of signing the contract. The plan was to go live on 1st November, 2018.Â

SAP was sharing Business One as their next product suite for us but that was eliminated early on because the user interface didn’t seem like something that was going to be easy for us to grasp and it seemed to be more manufacturingÂ oriented than was appropriate for us.

Returning to the implementation timeframe, Blake explained that there was a degree of artificiality involved because while he wanted to ensure that people were comfortable with the changes in the post go-live situation.

I’ve had experience of this scenario in much larger companies and I know that making any changes is far from easy. Since this system is designed to take us forward, I wanted our people to remain focused on the 90-days so that we had some room to let the people and systems settle down for the beginning of2019.Â

Blue-9 found that despite its relative inexperience of ERP systems, it was able to do much of the workÂ required on its own with the exception of checking cutover open items and implementing the website element. Says Popper:

We had great employees on the NetSuite side who helped guide us through the various steps. There was a degree of finagling in the October/November timeframe but fortunately it wasn’t super challenging.Â

Blue-9 has been especially pleased with the way NetSuite provides the firm with rich accounting data. This may seem mundane but as anyone will tell you, a successful business depends on managing cash flow and healthy profitability. Blake comments:

I’d always felt that based on what I knew, that our profitability should have been five points higher than what we were seeing under the old system. I can tell you that more accurate tracking, better inventory management reporting means that we are achieving those additional five points. In a previous world, I learned that if you don’t have good data you make bad decisions.Â

Elsewhere, Blue-9 believes that NetSuite has helped them not only maintain a lean but efficient business such that people using the system are relieved from mundane tasks.Â

We’ve got a high degree of automation that ensures that not only do we need fewer people doing routine work but that the quality of work is improved.Â

The future is bright

Blake says that he’s confident the NuiteSuite system and SuiteSuccess are not only contributing to current success but will support planned expansion. Blake concludes:

We’ve been working on quite a few new products that we’re looking forward to bringing to market and we know NetSuite will support that. A couple of months ago we committed to one of the first automated manufacturing machines of its kind in the US which will triple production – we need to double just to keep up with current demand. We’re also expanding strategic relationships dramatically so when you take that altogether it then becomes about scale and that’s where we’re confident that NetSuite fits in.Â

Business transformation takes many forms and in dynamic markets, firms can easily find themselves overwhelmed when the systems they have in place can’t keep pace. This is that kind of example. What makes this interesting in my mind though is that keeping the basics of the business as simple as possible has allowed Blue-9 to both remain efficient while putting its resources where it matters most to them. Having the right software at the right time is key to that continued success.Â

Disclosure – Oracle NetSuite is a premier partner at the time of writing.