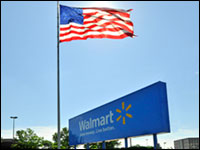 Walmart’s e-commerce focus “remains on earning repeat visits and strengthening our assortment of merchandise,” she told the E-Commerce Times.

It’s also “improving search, enhancing our website, and executing better on the fundamentals — such as product reviews, inventory mirroring and on-time delivery — to accomplish this,” Babbitt added.

“Catering more to digital natives is an imperative rather than an innovation at this point,” said Seth Lippincott, director of research at Nucleus Research.

“If Walmart wasn’t making the investments it is and pushing its e-commerce platforms, I would be worried about it ending up like Sears,” he told the E-Commerce Times.

A better assortment of products was only one factor in Walmart’s success, noted Ray Wang, principal analyst at Constellation Research.

The acquisition of Jet was another, he told the E-Commerce Times. Further, the company has “brought in top talent over the years with CIO Clay Johnson, CTO Jeremy King, and acquired folks like Jet’s Simon Belsham.”

Walmart remains “committed to providing a superior value proposition as we compete aggressively on price across a broad spectrum of products,” Babbitt remarked. “We’ll be there when, where and how [customers] want to shop, and we’ll deliver new, convenient experiences that are unique to us.”

The chain’s strong quarter “shows the results of its investments in technology, and also in advertising to make customers aware they have more modern commerce options from the traditional retailer,” Nucleus Research VP of Research Rebecca Wettemann told the E-Commerce Times.

In fact, Walmart is the brand
most people wanted to buy from, according to Morning Consult.

The company last year redesigned its Walmart and Jet websites, and it added a number of specialized stores, including the Lord & Taylor shop and Fanatics on walmart.com, and the Apple and Nike stores on jet.com.

It launched Jetblack, a conversational commerce platform, last spring, and it introduced new features for the Walmart Marketplace, including free two-day shipping on millions of new items, and in-store returns for online purchases.

Jetblack “is mainly a way to test and build conversational commerce, which we believe will be a pervasive way of shopping in five to 10 years,” Babbitt said. Over time, “it could be applied to all of our businesses.”

Walmart “recognizes that conversational mechanisms can be used to build a relationship between the consumer and the brand that not only encourages the purchase and increases the conversion rate, but also makes a more personal connection with the consumer,”
Payability CEO Keith Smith told the E-Commerce Times.

Powering Up With Groceries

“The main goal is to learn,” Babbitt said. “We want to make sure we stay on the cutting edge of grocery delivery by exploring what’s new and next.”

In five to seven years, 70 percent of consumers will purchase food and beverage goods online, Nielsen and the Food Marketing Institute have predicted.

“E-commerce generally is booming, so partially this is a wave Walmart’s riding,”
said Michael Jude, program manager at Stratecast/Frost & Sullivan.

“There are more and more niche marketplaces and e-commerce players that can offer a unique value proposition to buyers,” Payability’s Smith noted.

There is no real competition between Amazon and Walmart because “Amazon has generally been focused on extending the online transaction into the brick-and-mortar realm, while Walmart has been focused on leveraging its bricks and mortar to enter online retail,” Jude told the E-Commerce Times. “The competition has been less about taking each other’s customers away than retaining their customers by giving them more options.”

Further, Amazon has multiple business models, Wang pointed out. “There’s still a lot of room to catch up with Amazon on e-commerce and Alibaba going forward.”

That said, the e-commerce business may be cannibalizing overall growth, he warned. “Growth is still in the single low digits, while Amazon’s growth is massively double digit.”