The shift of live content from traditional broadcast television to online sources has significantly changed the video industry — and especially, the news media industry. News typically derives its value and attracts viewers with live updates and real-time engagement.

The combination of digital creators and more professional digital networks, like Cheddar, offers consumers more news options than ever, and consumers easily can choose the type of news media they want to watch.

They also have the technology in hand to do so, as U.S. broadband households now have more than eight connected consumer electronic devices, on average, and WiFi coverage is increasingly ubiquitous, allowing high-speed wireless connections almost anywhere.

These factors have created a more crowded news industry, where traditional and alternative news media compete for attention and viewers across a variety of platforms. While this means a diversity in news personalities, it often leads to a homogeneity in the news stories being covered, as all players scramble to cover the top breaking stories in order to maximize their audience.

A decline in local broadcast news viewership has exacerbated the decline in diversity of coverage. Consumers have been replacing local news with news from social media and national outlets.

Recent surveys have confirmed the overall growth of social media news, growth among viewers 50 and older, and social media’s place among young viewers. Sixty-seven percent of U.S. adults reported getting some of their news from social media in 2017, up from 62 percent in 2016, Parks Associates reported. 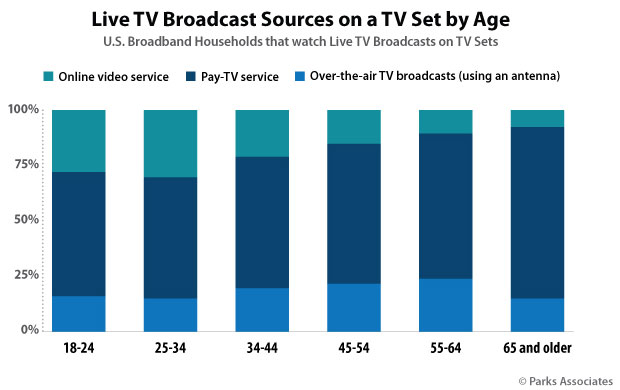 The national media giants rely on commentary from experts and media personalities to supplement breaking news, along with debate and talk shows that discuss news-related topics, in order to hold their audience.

Even Netflix has tried to enter the talk-show space, with limited success so far, by launching shows featuring David Letterman, Chelsea Handler and Michelle Wolf, among others.

Even the national outlets will lean more heavily on online sources for their news coverage. Many of these companies, like Fox News and CNN, will simulcast coverage from television, while creating live shows specifically for online viewing.

Additionally, social media Q&As about particular topics, articles, and events have become commonplace within online news. These can occur with writers themselves, as is the case with Politico‘s coverage of the midterm elections, or in the case of news aggregators like Yahoo! and Google, which have a limited staff of writers or no writers at all, but host live streams of other news stations instead.

Starting in 2017, a number of news organizations, such as MTV News and Vocativ, pivoted to video, where they abandoned long-form articles, fired a majority of their writing and editing staff, and pursued a solely video-focused strategy.

While there are advantages to the pivot to video in terms of viewer engagement and session length, this strategy presents a number of challenges. News media companies employing this video strategy typically see significantly fewer visitors to their website, but they score higher engagement and longer sessions with those fans, who are more passionate than the average viewers.

That is an important payoff, because good video content is extremely difficult and resource-intensive to make. News media must adapt their video content to a variety of different platforms.

Finally, social media sites are not beholden to third-party content and can opt to change the algorithm or interface at any time, in the hope of improving the user experience. Facebook sparked controversy recently, related to alleged misrepresentations of its video content metrics.

Media organizations, which build their digital strategies based on these algorithms, can see their traffic from social media drop when these changes occur, as happened recently to BuzzFeed, HuffPost and Mashable.

News organizations will address these challenges, as the need for video and online live options is a key part of the new strategy for news and content organizations. The decline in viewing on linear television should not be mistaken for dwindling consumer interest in live news coverage.

Live video in a variety of content categories — sports, news and events — has tremendous appeal to all viewers and continues to play a critical role in the content business. Consumers seem more than willing to watch ads during online news coverage as opposed to scripted television, indicating there are new business opportunities in this area.

The shift of live content to online, enabled by the proliferation of connected devices, creates new and appealing content options for both providers and consumers. Alternative platforms have stepped in to capture a portion of the live audience, and services like Instagram Live and Twitter have led the charge in live online video entertainment.

Major national news organizations, accustomed to viewers turning to them, now need to go where the consumers are, which increasingly is online and on social media platforms.

Billy Nayden is a research analyst at
Parks Associates.