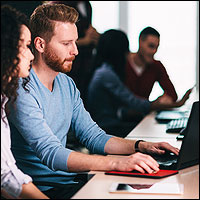 Now would be a good time to put Zoho on your radar if for some reason it isn’t there already. The Austin-based company just announced Catalyst, a developer environment that helps programmers and others to speed development of apps and microservices with capabilities inherited from Zoho’s apps portfolio.

The easiest way to understand this is to say that Catalyst is based on the company’s internal development tools, affording many users with a way to make apps that are contiguous with what they buy from the vendor.

With this Zoho joins a small club of software houses that have exposed their own developer tools to outside customers using their platforms. Part software tools, part infrastructure play, Catalyst layers on top of an infrastructure service that for the last 13 years has enabled more than 200,000 developers to build and deploy 26 million functions.

With more than 45 business apps now available and more on the way, Zoho presents the developer community with a big selection of tools and functions that programmers can pick from to accelerate their application development. So what’s so important here?

Zoho has a reputation for being a low-cost provider. The 7,000-person company has 14 offices worldwide, as well as international headquarters in Chennai, India. In an industry that is rapidly commoditizing, it perhaps represents a second generation of commoditizers.

The first generation is domiciled largely in the U.S. and Silicon Valley, where competition for talented developers has driven up labor rates. The privately held Zoho has kept its costs low by locating development centers in emerging parts of the world where there are large talent pools that simply need better access to the marketplace. Those locations also have significant demand.

It should be no surprise that Zoho’s customers are counted in the millions in markets where publicly traded American companies have a hard time competing, due to a greater need for standardized prices.

I’ve written about Zoho before, noting its technology and approach to the market. I also have advised it on occasion, FYI. Its strategy has been to focus on smaller to medium-sized companies, but there is nothing about Zoho’s technology or market approach that limits its ambition.

At the moment it’s not the biggest player in the U.S. market, but we’ve seen this kind of approach before. Clay Christenson wrote eloquently about it in his classic book, The Innovator’s Dilemma.

A grassroots strategy is often effective at capturing parts of a market that are less desirable to the incumbent market leaders, according to Christenson. Innovation by challengers is sometimes enough to overcome obstacles and turn a challenger into a leader. The best example of this approach for the last 20 years has been Salesforce, which dethroned Siebel Systems — once the CRM market leader — and muscled out and outlasted others.

Everyone should pay attention here, because a grassroots strategy isn’t easy to pull off. It often fails because incumbents remember where they came from. Also, as markets mature it’s hard to find a little white space to plant a new idea.

Companies like SAP and Oracle have been in the enterprise space for a long time and are trying to navigate the challenges of cloud computing. So far, their technologies are good, but they face an uphill challenge from the likes of Amazon Web Services, for instance, which caters to smaller users.

Salesforce, on the other hand, never really left the grassroots. They’re spending bigly (to coin a phrase, ha!) every year to provide products to small and emerging companies while also going after the biggest enterprises, often in an attempt to take customers away from the likes of SAP, Oracle and Microsoft.

Salesforce’s approach to managing the labor costs of building software has been to encourage customers to foot the bill or to build up a cadre of knowledgeable users through its Trailhead program. Oracle recently announced a similar venture by providing free development environments to almost anyone.

So, things change, and the innovator’s so-called dilemma won’t be playing out today as it did when the book was first written. Nonetheless, a company like Zoho can capture market share even in the most crowded places.

We’ve entered an era when it’s almost impossible for a new CRM system to emerge because competition is so intense, and the same might be said for development tools. It takes money and other resources to launch a new company, and investors may have concluded that the CRM market isn’t the most promising anymore.

Zoho is a different animal. It’s private, profitable and self-funding. It has the maturity to become one of the handful of vendors in an IT oligopoly because it also has the necessary pieces to fit into a marketplace that’s rapidly commoditizing and coming to resemble a utility. Releasing Catalyst is a significant down payment.